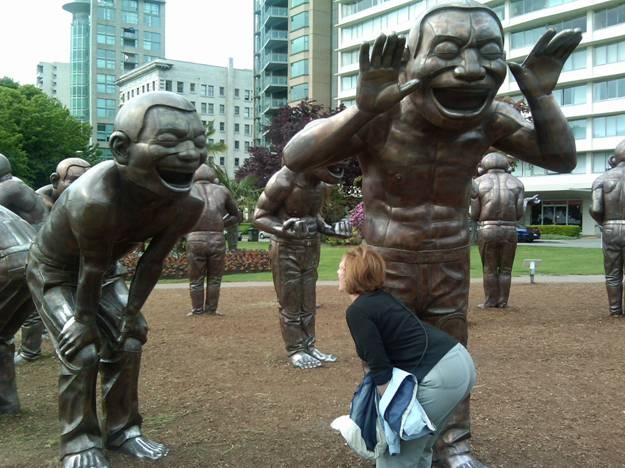 Over the last 30 years, we have made a number of fast stops in Vancouver Canada on our way to other destinations such as Alaska, Vancouver Island (Victoria, Torino, etc.), Whistler, and the Okanagan Valley wine country. Although we have walked some of the highest-profile tourist neighborhoods and seen some of the premier sites, we limited each stop typically to one day.

This changed in June 2011 when we traveled to Vancouver for a four-day weekend around the annual conference of the Travel Blogger Exchange (TBEX). Although the weekend was filled with back-to-back meetings and more parties than one should ever attend over a weekend, we managed to squeeze in enough time to get a real feel for the city.

We arrived Thursday afternoon in time to do an introductory walk of most of the central, urban core of the city. (It isn’t that big: the populated section, from Chinatown to Stanley Park, is only about 3.5 square miles). This gave us a great opportunity to get a feel for the city—the harbors filled with yachts, the views across Burrard Inlet to the mountains, and all the different neighborhoods (including the historical Gastown, hip and upscale Yaletown, ethnic Chinatown, the Robson Street retail district and the West End) and see some of the city’s extensive collection of public art (especially the very people-friendly “A-Maze-In-Laughter at English Bay” on the corner of Denman and Davie Streets). We even squeezed in a bit of Vancouver’s own slice of nature—the huge Stanley Park (almost the size of the rest of West End and similar to the size of Central Park in a city that is one-fifth the size of New York).

While this walk provided a context with which to understand the city, TBEX and Tourism Vancouver helped provide more detail by offering blogger attendees a choice of several sightseeing options (bike tours, Stanley Park Tours, Granville Island walking tours, and so forth.) Since all these tours were filled by the time we got around to registering, we accepted what we expected to be a consolation prize, a Gray Line Tours bus tour of the city. (We NEVER take bus tours!) Much to our surprise, the tour was fun, filled with information, and gave us a chance to see the two areas of the city for which we would not otherwise have the time (Stanley Park and Granville Island).

However, we were not done exploring the city. We went to dinner each night and even got away one day for lunch, which gave us more time to explore four neighborhoods in more depth. (The other lunch just happened to coincide with the Eat! Vancouver show which, being located in the convention center in which our conference was being held, gave us a chance to nosh on samples.)

It also just so happened that the TBEX conference also coincided with two other, much more interesting events that produced unexpected bonus opportunities:

Vancouver is, of course, a huge hockey city. The enthusiasm surrounding the Canucks’ chance to win its first-ever NHL championship, was infectious. Every bar and restaurant with a large screen television was packed (and those without, empty) during the game. The city, meanwhile, accommodated those who wished to see the game outside, with thousands of their closest friends, by closing streets and setting up huge projection televisions. While the entire evening was a party, all heaven broke out when the Canucks won, launching a full night (TGIF) of celebration. The joy associated with taking a lead in a still incomplete series generally matched what we have experienced when the Boston Celtics, New England Patriots, and the San Francisco 49ers and Giants actually won championships. Inour experience, the only sports celebration that clearly beat this celebration was that when the Boston Red Sox finally broke the curse. That, of course, was pretty much in a class of its own!

In sum, Vancouver is a great, easily navigable, and highly manageable walking city. It is:

While we were impressed with the city, we were disappointed by the Canucks 0-4 loss to the Bruins in Game 7. (Since we lived in Boston for 20+ years, we wanted Boston to win, but we would have preferred a closer game.).

But our disappointment was nothing compared to that of Vancouverites. After seeing the best side of the city after the Game 5 win, we saw (actually read and watched videos of) the worst after Game 7.

The loss spurred riots (as, apparently, did a 1994 Game 7 loss), looting, burned cars, and even stabbings. But even this travesty apparently had a somewhat redeeming ending. One citizen, “Smitty Smith” used Facebook to recruit an estimated 13,000 people to a “Post Riot Clean-Up” event. The city, other than boarded up windows, treated wounds and other lasting physical—not to speak of psychological—scars,  was apparently almost back to normal by Thursday noon.