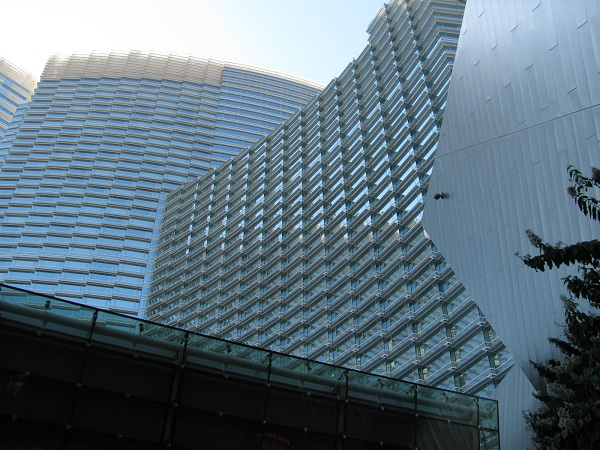 The last time we were in Las Vegas, the huge City Center complex was still being built.

But barely, since work on the largest privately funded development in history ($9.8 billion) was stalled by the crash and loss of funding. After the financial and economic crashes and loss of the funding needed to complete the project, the partners had just announced that they found an alternate source of funding required to complete and open the development.

This was our first trip to Las Vegas since then. Given that nothing else new and interesting has opened since our last trip–and that the mid-August temperature was well over 100 degrees—we decided to limit our exploration to the air-conditioned confines of the architecturally stunning, and for us, unexplored, City Center.

City Center was always intended as a showplace. It is a veritable constellation of showplace buildings designed by renowned architects including Helmut Jahn and Kohn, Pedersen Fox. The buildings, which consist of fascinating juxtapositions of shapes and angles, include:

Another not-yet-completed condo/hotel building, called the Harmon Building, is separate from the main complex. It, however, is currently subject to a legal dispute between Perini Building Co. (the contractor ) and MGM Resorts International (the developer/owner of City Center). Perini wishes to finish the tower and MGM wants to implode and cancel the structure.

A Sampling of City Center Restaurants

We stayed at Aria, in a spacious, well-designed and appointed room with a very nice bathroom, good views of the complex, and a partial view of the Strip.

Since we were otherwise occupied during the days for a convention, we had only three evenings to explore the complex. We managed to explore the entire property, enjoy most of the public art and browse the galleries. Although we copiously avoided the lures of the casino (despite having to walk through it to get anywhere from our room), we did manage to eat at four of the Center’s many restaurants:

Although we enjoyed all four of the restaurants, Lemongrass and especially American Fish, were our favorites.

We also took in what was probably our (or at least Tom’s ) tenth Cirque de Soleil show. Viva Elvis was certainly entertaining. The music brought back memories, the narrated history (which some who know Elvis much better than do we claim takes liberties) provided context and the production was, as would be expected, elaborate. The biggest production numbers, Viva Las Vegas, Suspicious Eyes, Hound Dog, and especially Blue Suede Shoes were visual feasts, some with more than 40 dancers and musicians on stage at a time. We, however, generally preferred some of the more subdued numbers, particularly those that featured gymnasts, rather than dancers. Our absolute favorite, however, was Got a Lot of Livin’ to Do. Although far from our favorite song, we were captivated by the incredibly choreographed and synchronized trampoline scene (although we have always been suckers for Cirque de Soleil’s trampoline acts).

Overall, however, although we enjoyed the show, we rate it behind others such as O, Ka, and Love. But while we may have only liked Elvis, Aria clearly loves him, with banners outside, busts and pictures inside, and of course, a big Elvis gift shop.

Although we remained inside the complex (and inside the air-conditioned buildings) for most of our time at City Center, we made one brief stop next door, at one even newer development that opened one year to the day after City Center: The Cosmopolitan, with its somewhat over-the-top (even for Vegas) Chandelier Lounge.

We also hoped to take advantage of some City Center’s other amenities, such as some of its other restaurants (including Sage, Twist, BarMASA and Blossom) and at least one of its three swimming pools. Oh well, perhaps the next conference.