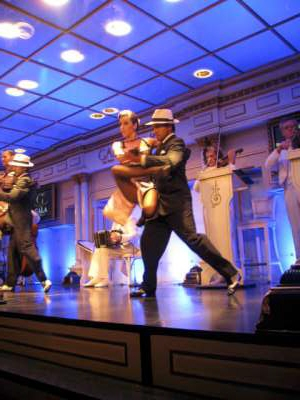 We tried to eat at a wide range of Buenos’ Aires restaurants, all types of specialties and price ranges. But as much as we sought diversity, one thing held pretty common through the entire trip—most of our (especially Dave and my) meals were based on meat. On one hand, we felt guilty for eating more meat in a week than either of us normally does in a month. But what the heck—when in Argentina, eat as an Argentinean.

What better first meal in Buenos Aries than at one of the city’s premier steak houses, especially when sitting on their deck overlooking the boats at the Puerto Madero Yacht Club?

Dinner began auspiciously enough, with a bottle of Kaiken Ultra 2009 Cab from Mendoza and a plate of steak house-appropriate amuse vouches–cheese cubes in a honey sauce, tenderloin cubes in a cream sauce and a small beef empanada, followed by a very nice appetizer–veal Carpaccio with Parmesan cheese and arugula

Although my rib-eye steak was wonderful, David’s alleged porterhouse looked and tasted more like a small strip steak and Joyce’s huge (32 ounce) prime rib was actually a bone-in steak. When Joyce finally received her twice-requested baked sweet potato (which turned out to be a half-baked white potato) she sent it back. I decided to experiment with a “potato soufflé. It turned out to be effectively, two potato chips fused into a tube. Pretty good as potato chips go, but not much of a potato.

The real problem was with the service. Our server seemed to get upset when we requested the wine list and when we were not ready to order the first three times he came to the table within ten minutes of giving us the menu. He demonstrated his distain each time he poured our mineral water or wine, quickly pouring the liquids and lifting the bottles in way that left trails of water and wine across the table and our plates (although we should have been thankful it was not our clothes). Then he took to ignoring requests for the check and leafed at me when I admittedly called him in a louder than appropriate voice.

So much for our first classic Argentinean steakhouse experience.

La Ventana is a popular, pretty lunch and dinner restaurant that offers two nightly tango shows. We went for lunch–an attractive 35 peso price for a choice of four principle plates, a glass of wine (Malbec or Chardonnay) and a bottle of water (still or sparking). My baked chicken, stuffed with cheese and bacon, in a tomato sauce was quite good. Joyce’s poached hake was, well, like a poached fish– not particularly interesting. The experience, however, was pleasant.

Although our initial plan was to go to a local tango club, rather than a staged show, a tour and a discussion of the two clubs almost convinced us to change our minds. We did, however, return to our hotel, told them of what we were looking for (informal, local flavor, etc.) and asked for their recommendations. Without our even mentioning La Ventana, they overwhelmingly recommended what they insisted was, by far, the best show in town, Gala Tango. Contrary to my efforts at persuasion, Joyce and David voted to do dinner at the show, rather than to go to a separate restaurant.

When we arrives. We discovered that Gala Tango was non other than La Ventana, which did make me feel somewhat better about eating at the show.

We began our three course meals, which included unlimited wine (we chose yet another Malbec, this time a Alamos 2010) and mineral water, with a beef Carpaccio (with olive oil, parmesan, arugula and capers), and veal empanadas, both of which were good. Although our entrees (grilled baby beef and pink salmon) were less interesting, the deserts (pear poached in Malbec, vanilla custard with dolce leche and especially the semifredo of sabayon with almond praline and strawberries) were better. Not so for the service, which despite formal introductions and pretense, was slow and in some cases, even amateurish.

But, when the show began, all our concerns of food washed away. We were totally engrossed in the engaging music, the exquisite, sensual, incredibly precision dancing, the lovely singing and the somewhat kitschy, but incredibly fast-paced, wonderfully rhythmic and engaging bolero exhibition. 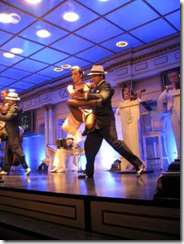 We would recommend the show (albeit not necessarily the dinner) to anyone.

Fascinating. When we arrived at the address for the restaurant, we saw a huge, locked steel door, surrounded with a mural- and graffiti-filled wall. The only indication it was a restaurant came from small stenciled sign on the corner of the door. As we were preparing to walk away, a woman, who happened to be going to the same restaurant, told us that we had to ring the bell. Once we were admitted, we were faced with an attractive, starkly modern front room with open stainless steel kitchen and a full-length, floor-to-ceiling window onto a patio decorated with banana trees.

Although we ordered only one course apiece, we were both very pleased with the food. While Joyce was initially disappointed to hear that the restaurant had run out of skate wing (to be prepared a planchette with octopus Bolognese, brandade, apple and basil bread crumbs) she reluctantly ordered the substituted fish–said to be a sole– prepared the same way. She was, however, happy to see that the “sole” was a cut and had a texture and taste more like a sea bass (although it wasn’t) than a sole. In any case, the meal was tasty. I too was pleased with my meal, a veal tenderloin with chimichuri, “carbon” (which to me we’re mashed) potatoes, coddled egg and farofa. This meal was with a 2009 Bodega Carrias Reserve Malbec. 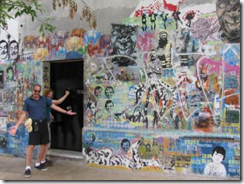 Joyce and I shared shared two dishes. The salmon breaded in cashews with a saffron shrimp a sauce, cassava chips and watercress and radish salad with grapefruit vinaigrette was okay, although the salmon had a bit of a fish taste. Joyce’s seafood risotto (with prawns, octopus, squid, scallops and mascarpone cheese was certainly the better of the two dishes. The sommelier recommended a Very reasonably priced Graffigna Centenario point gris, which, with its light acid and grapefruit, went particularly well with the risotto. Overall, a pleasant, if not really memorable experience.

Since we only wanted a small bite, we shared (somewhat to the server’s dismay) the Croque Madame (quite good). We somewhat made up for this by also sharing yet another bottle of Malbec, a 2009 Bodega Norton DOC.

When we requested a good, casual restaurant within a few blocks of our hotel, the concierge immediately recommended the family-run El Estrebe. David’s appetizer (baked parmesan cheese with fried onions and tomatoes) was better than my admittedly challenging veal kidneys wrapped in lamb tissue). Joyce’s rolled chicken stuffed with mozzarella, ham, bacon, peppers and tomato) was much better than David’s pork steak and my Uruguayan beef.