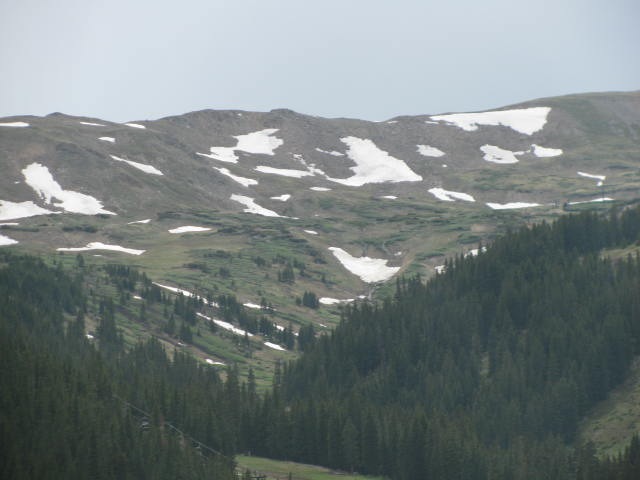 We went to Keystone for the annual TBEX travel blogger conference. We, all 800 of us, we’re w welcomed at an incredible blow-out evening reception staged by the resorts of the Vail Valley.

The adventure began at the base of the River Run Village gondola, which took us (along with our complimentary glass of bubbly) on a scenic, two-stage ride to the Outpost at the top of the mountain. 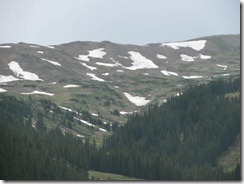 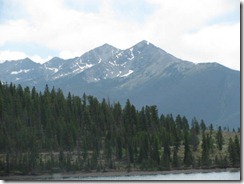 We were greeted with a selection of wines and local micro-brew beers and nine stations at which each of the resorts’ restaurants offered a perfectly plated sample of one of the signature dishes. We sampled, among other dishes, Der Fondue Chessel’s smoked gouda and Crab fondue, Ski Tip’s house cured orange salmon with panzanella and feta and Game Creek’s butter poached shrimp with corn, jicama and chipotle. 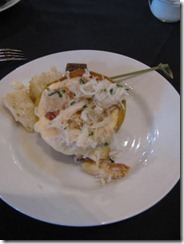 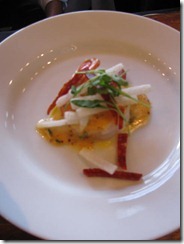 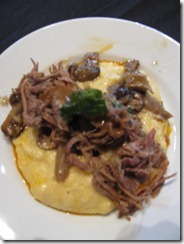 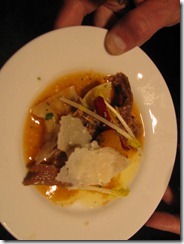 A Fantasy of Chocolate

All this, however, turned out to be merely a warm up for what turned out to be the main event for the evening. After a brief walk to take in the wonderful views, we made our way into a tent that housed Keystone Resort’s Dessert Buffet. We have been to a lot of dessert buffets. We have never been to anything that was anywhere near the same leave as this phenomenal fantasy land of chocolate. We were greeted by a lovely, although relatively standard, three-tier chocolate fondue fountain with all the fixings. 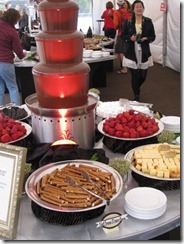 Then came the masterpieces; a huge table filled with more than a dozen beautiful, ingeniously inventive concoctions in which virtually every component was constructed of different shapes, colors and tastes of chocolate. There was the chocolate taco , the ?? and, of course, what would dessert be without a dainty chocolate teacup filled with filled with Bailey’s Cappucino. 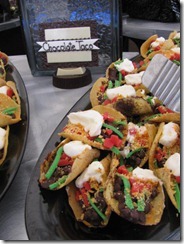 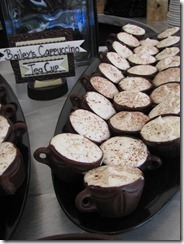 All of these were fun, lovely and most, even though we are not normally huge chocolate fans, for the most part, delicious. They were, however, mere warm-ups to three incredible, show-stealing creations that were nothing short of culinary artistic masterpieces. For the “pasta course” we selected the white chocolate spaghetti with meatballs. For the “meat course”, we just had to try the fully loaded cheeseburger. 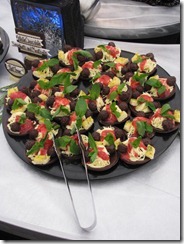 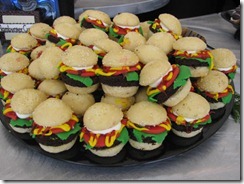 After sampling each of the nine savory dishes, we felt incredibly guilty that we were only able to have small tastes of these chocolate creations. But, since our mothers were not there, we ignored the stricture of not being able to have “dessert” until we cleaned our plate. We just had to sample one of the prettiest dishes of all. 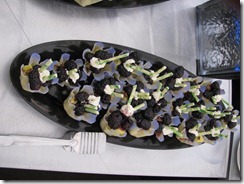 After all of this, we, being of the baby boom generation and coming in from San Francisco after three hours sleep, we decided to skip the after party band.