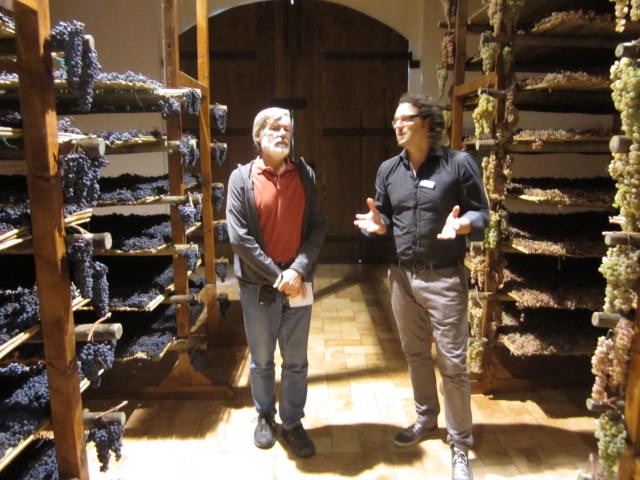 Although we have always liked Montepulciano, by the time we completed this trip, it has become our favorite Tuscan destination—the town in which we will next stay and use as our next base of exploration.

Our morning began early with a 1.5 hour drive from our Chianti villa to our first winery–a drive that ended up taking 2 hours with what had become our standard “getting lost” time. (While Tuscan roads are hilly and curvy, and signage inconsistent, one of our biggest problems was our Android phone’s GPS system, which had gotten into a habit of losing satellite connection when we get within 5-10 km of destinations.) Luckily, with a combination of maps and the good will of strangers, we always seem to arrive at our desired destinations.

This morning’s assistance came in the form of a resident of Valiano, a town close to the Avignonesi Winery at which we had our first appointment. After telling two residents where we were attempting to go, they explained obviously complex instructions in perfect Italian (of which our combined vocabulary consists of ten words) and gestures pointing us in different directions. We found a tie-breaker; an older gentleman who took pity on us. After a number of attempts to explain, he managed to signal that we should follow him. He got into his car, turned it around and led us more than 5 km to our destination. And, since we had built 30 minutes of getting lost time into our schedule, we arrived exactly on time.

We began our visit with a brief tour and explanation of the practices being employed in one of the vineyards that is about half way through the process of being certified organic (with biodynamic certification being a future goal). Then a tour of the drying room for the grapes that would be used in the winery’s renowned Vino Santo desert wine, followed by tours of three aging rooms, each with different size barrels, from a couple dozen liters in which the Vino Santo spends ten years, up through 30 year-old 100 hectoliter oak tanks used for Vino Nobile di Montepulciano.

After the tour it was time for a tasting with the winery’s current owner, Virginie Saverys, and her son Basile. We began with two whites (a wonderful 2011 Sauvignon Blanc that seemed to meld pear and peach tastes with the traditional grapefruit) and then progressed through one Sangiovese-based DOC red (a rather light and fruity, easy-drinking 2011 Rosso di Montepulciano) and two DOCGs, both of which are likely to age very well. The first is a 2008 Vino Nobile di Montepulciano and the second a 2007 Vino Nobile di Montepulciano Riserva Grande Annate, the last vintage the winery felt merited a Reserve wine.

Next came two Super-Tuscans: The 2008 Desiderio Cortona DOC , which is 85% Merlot and 15% Cab; and the wonderful 50 & 50 IGT Toscano, to which Avignonesi contributes the Merlot (50%) and partner Capannelle from Chianti Classico contributes the Sangiovese (the remaining 50%).

Then came the real treats: the incredible 1998 Vin Santo di Montepulciano which is made from 5-month dried, ten-year barrel-aged and five-year bottle aged combination of Trebbiano toscano and Malvasia. The wine looks and pours like syrup, tastes like a liquid, carmelized cream brûlée. Incredible! The 1998 Occhio di Pernice Vin Santo di Montepulciano is a red wine (100%) Sangiovese) that goes through the same treatment and is almost as luscious as its white wine cousin. 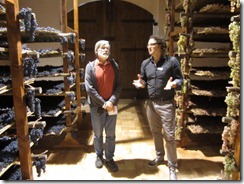 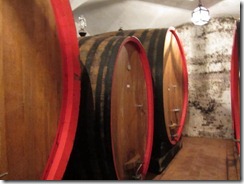 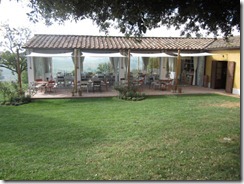 Fortified with wine, we were ready to scale the beautiful walled hill town of Montepulciano. We had been to the 2,800 year-old town (founded by the Etruscans, grown by the Romans and later affiliated with Siena and then Florence) twice before. While we wanted to spend more time wandering the streets and exploring some of the interesting stores along the Corso, we were unfortunately, on a tight schedule. After all, we had a meal to eat and wines to taste. So, after am all too brief walk through the town, we had to get back to “work.” 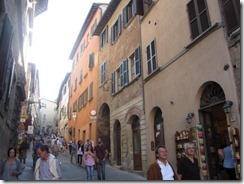 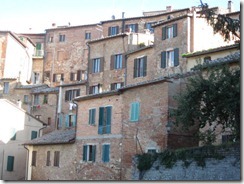 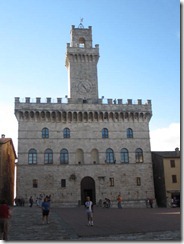 A Lunch to Remember

Our next stop was at Le Logge del Vignola, where we had reservations for lunch. Since we had many wines left to taste, we needed food to prepare us for what promised to be a tough afternoon. Although we would have normally shared an appetizer and a couple of main dishes, the restaurant, which provided us with a complementary meal, had other ideas. They felt that we should have not only their four-course tasting menu, but also, pair it with some of their nicest wines.

The result was a 2.5-hour feast, interspersed with discussions with our server and the sommelier and our new friends from the table next to ours. The restaurant accommodated our desire to sample as many different Tuscan preparations as possible by bringing different dishes, each with its own wine, to each of us. As a result, our four-course lunch turned into eight different dishes, with nine different wines. After a glass of 2006 Alta Langa sparkling with an amuse bouche of anchovies with pesto on puff pastry, we were off: 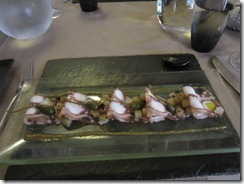 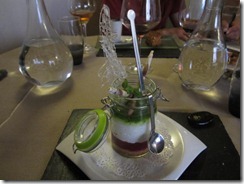 The meal was finished with tea and accompanied by discussion of the restaurant’s focus on fresh, locally sourced ingredients and wines and the chef’s approach to Tuscan cooking. Overall, a wonderful experience that prepared us for an afternoon of tasting of several other local wines.

There is no shortage of wine tasting opportunities in the Montepulcino, Enotecas, tasting rooms and underground cellars abound. The hard part is in deciding which to try and which to pass on. We took advantage of three: 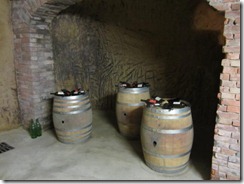 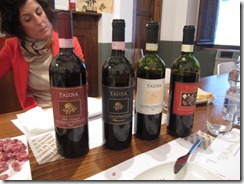 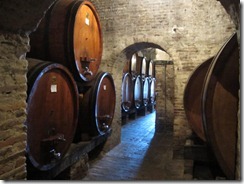 For those who noticed the title, we referred to our “Almost Perfect” Day. What kept it from being perfect? We didn’t stay in Montepulciano. We had to drive almost an hour and a half to get there, and, after running into an accident on the way home, two hours in the evening.

But, thanks to the people at Enoteca del Conzorio, there was even a silver lining to the drive home. They recommended that we stop in Pienza, a pretty medieval town a short distance from Montepulciano that is the home of Pecorino di Pienza sheep’s milk cheese. After a brief discussion with a local cheese monger, we left with a Pecorino that was aged in grape must. That, combined with a Vino Nobile that we bought in Montepulcino, and a wild boar sausage that we got at an incredible store in Greve (see our blog on Chianti wine and food experiences) provided a wonderful dinner. 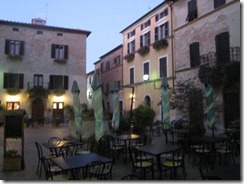 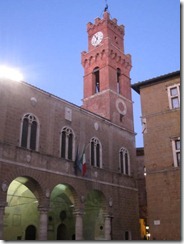 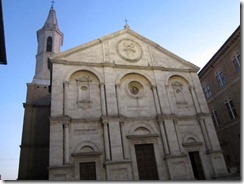