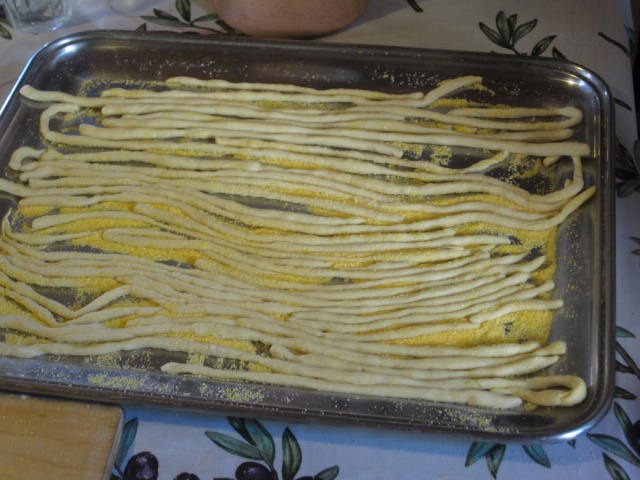 One of the pleasures of traveling is exploring regional foods. And what better way to explore food than by taking a cooking class! Each of our last three trips to Tuscany have included a cooking class. While the others were in restaurant kitchens, this one was in the kitchen of a personal house outside the town of Gaola in Chianti.

Toscana Mia, a school that is run by two sisters, Paola and Simonetta, has been offering classes since 1990. Our one-day class took place in a lovely 13th century farmhouse in Gaola, in southwestern corner of Chianti (the school has another location in Florence).

Right after we signed up for the class, we received a short questionnaire about food allergies and items we wanted to make. I requested two items:  pici which is a thick round pasta that I learned was made by rolling stripes of pasta between our palms to make it round, and boar ragu. I practically lived on these on our last trip to Tuscany and wanted to know how to make them. Our very fluent instructor, Paola, did a great job of keeping the class moving and getting everyone involved–even one man who was a little reluctant to get into kneading dough.

This was not the type of sleek kitchen with modern appliances that one might find in an upscale restaurant or cooking school. It was instead a homey, traditional farmhouse kitchen, where one would expect to find Mamma slaving away cooking for her family. Our menu for the day was also very traditional. In addition to my pici and boar ragu, we made fagioli al fiasco  or cannellini beans. I’ve never seen beans cooked on top of a stove in a glass bleaker similar to what you might find in a chemistry lab (which, as Paola explains, retains the taste and aroma better than does a pot). The end result was very tasty indeed (note to self…google “glass lab beaker, San Francisco” to find a source). 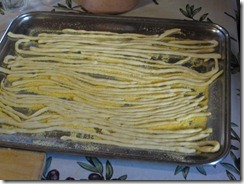 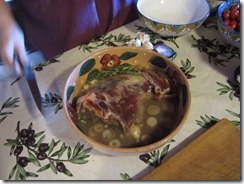 We also made a tomato bruschetta appetizer and, to go with the pici, salsa al l’aglione (garlic tomato sauce). And, since the grape harvest was in full swing, we finished the meal with schiacciata all’ uva, a type of sweet focaccia topped with grapes. 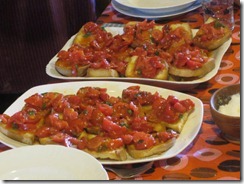 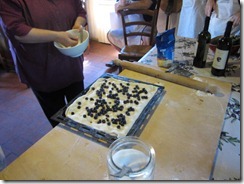 Our only disappointment had nothing to do with the class, location or instructor. It had to do with the class size of 9 people.  While we each got to play a role in cooking something, our group was too large to let each person have a hand in every dish as we did in our previous two Tuscan cooking classes, in which there were 3 and 6 participants respectively.

One of the best parts of any Tuscan cooking class is the wine, which flowed freely, from the time we crushed our first clove of garlic, to our last bite of desert. And, since we were in southern Chianti, what better wine than a Chianti Classico (2008 Casanova de AMA) that was grown and bottled literally, down the street.

Every time I go to am Italian cooking class like this, I vow to buy a pasta maker to make my own pasta. Now that I know that pici is made without a machine, maybe I’ll change my Christmas wish list. 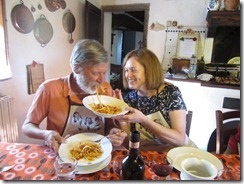