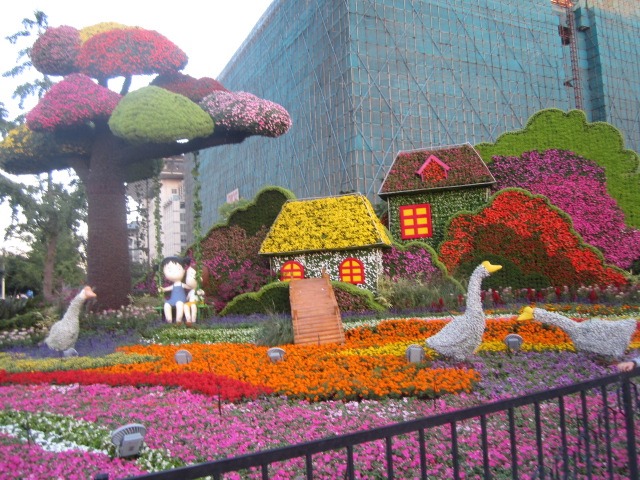 The last time we were in Beijing (albeit 15 years ago), we remember lots of small shops along most streets, with the men playing mahjong, the children watching TV and the women washing or doing other work (while the men played, which really irked Joyce).Those tiny local shops selling homemade goods have been replaced by bright, fancy retail stores and the basically-cut, drab-colored clothes of the 1990s have been updated by tailored, brightly-colored fashions that one would find anywhere.  Plenty of t-shirts with English written on them. Given that the country’s economy had grown by about 200% over that period,  we walked off the plane to a totally different country than we last saw. The old airport had been replaced by one of the most modern in the world. Cars, millions and millions of them, had replaced bicycles on the streets and a cab ride that was supposed to have taken 40 minutes, lasted two hours due to traffic. As we approached this 25 million-person city, many of the old brick and concrete hutong (alleys) neighborhoods had been replaced by modern, towering high rises. That doesn’t mean that the poor no longer exist. But they have been removed from sight. In some ways, Beijing has lost its personality. In other ways, Beijing has become part of the western world.

Some of the primary shopping streets, such as Wantfujing and Beixihoiao Street looked almost like Tokyo’s GInza—or like any western city. Most of these little shops have been replaced by an Apple store, or Forever 21, Marks & Spence, or any number of chain stores one would find in any city—especially those that cater to the 20 year olds. It is like seeing the Baby Boomers of China—those who are seeing their standards of living far surpassing their parents and who haven’t seen the hardship of their parents.

Yes, the Olympics must have played a role when the Chinese government focused on making China look good in front of the world (and they did a great job).  But so too must have been the increasing standard of living (for some people) as the government allowed people to accumulate wealth. Is this good or bad? The disparity between the haves versus the have-nots seems to be growing. And the rich are not just westerners frequenting the hotels, shops and restaurants, but are the nouvelle riche Chinese who are walking down streets with shopping bags filled with expensive brand-name western  clothing and other goods.

Still, we really enjoyed Beijing. The bad news is that we chose to visit during Golden Week, which starts with National Day,  a celebration of the founding of the National Republic of China, following by a week when most Chinese are off of work and are playing tourist in exploring their country. Think hundreds of thousands of people fighting to see things that we want to see. On the other hand, if one can deal with hoards of people, Beijing was showing  beautiful landscape and flower arrangements for the festival. Hundred of thousands of people…….or beauty. We felt that the tradeoff was worth it and saw some wonderful historic sites that we have seen before, and new sites. This blog summarizes our time in Beijing. It includes links to separate blogs that identify more detail on various things to see.

Transportation. Beijing’s subways are a very inexpensive way to explore the city (under 50 cents a ride). Although more expensive than the subway, taxis are also relatively inexpensive compared to the US. Depending on the traffic (which is huge and often at a standstill), it is often worth the additional money to use a taxi versus transferring several times on the subways. We suspect that when one is not there during Golden Week that the subways are a better choice. But during the holiday, the subways were always as jammed as the roads. Still, it is an easy city to navigate as everything is also written in English.  True, not many people outside of the tourist trade speak English, but with Google translate, one can go anywhere.

But don’t let the traffic scare you away from taking a bike tour. One of our most enjoyable days—and our most enjoyable tour—was an all-day bike tour from Beijing Bike.  Shawn, our excellent guide, carefully navigated us through a 25 kilometer course revealing historical sights from around the northern segment of the city’s first ring road, to the southern segment of the second ring road to a number of Ming-dynasty (generally from the 15th through 17th century) sights. The bikes were incredible easy on the butt and very easy to ride along the flat roads. This is a great way to explore the city.

Interesting things to see include:

QianMen, the two front towers that were on either site of the front gate to the old city wall.

Dazhalan, an ancient district just outside the wall, which has been redone in a modernized Qing Dynasty style. The Main Street, Liulichang, is a major tourist shopping street with a few true antique shops amongst block after block of tourist shops. The tourist area continues all around,with one street devoted to fast food-style restaurants and others to a broader range of shops. Just to the southeast, what looks like a recently rebuilt area with plenty of new buildings, but virtually no shops or people–something of a ghost district in the middle of the city.

Wantfujing Street. A major shopping street with a teaming night market, filled with stalls selling every conceivable variety of fast food. The soups, the dumplings and the skewers of meats, squid and other fish  seem to be most popular. More photographed than eaten, were the centipedes, spiders, scorpions and other insects, many which are wiggling on their skewers.

Bar Street. This two kilometer stretch of road along side a lake is street lined wall-to-wall, with nightclubs, with a few restaurants mixed in. While the bars , themselves were relatively sparsely populate, at least around 9:00 PM on the Friday night we were there, the young audits were out in force and and having fun, with or without alcohol.

The ride to Forbidden City (reviewed in a separate blog) also took us through a number of other hutongs, including some that have been recently reconstructed in more modern styles, with larger and more ornate homes.

Drum and Bell Towers. These towers, built in the Ming Dynasty, were used to notify residents of the beginning and end of the day and the opening and closing of the city gates (with a 63-ton bell) and the hours (with 25 drums).

Hou Lake. The lovely lake, surrounded by a lovely carved stone fence, is one of the more fashionable, and expensive, neighborhoods in the city. People take full advantage of it, walking, exercising and even dancing on the shores and kayaking and fishing on the water.

The National Theater, Tian’an Men (Tianamen) Square and Great Hall of the People are some of the most monumental symbols of modern China. Eleven gorgeous flower displays were in and around the Square to commemorate National Day. While the centerpiece was a 60×50-foot display of artificial flowers and fruit, some of the other, more human-scale displays on nearby street corners, most of which contained real flowers and greenery, were even more engaging.One, however, could not pass the square without noticing the four values of Patriotism, Innovation, Inclusiveness and Virtue (show picture of red signs) that the the state is trying to inspire in its people. 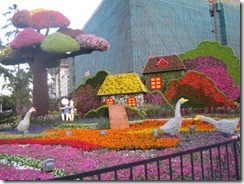 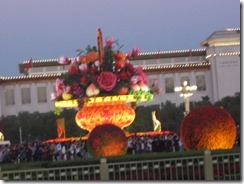 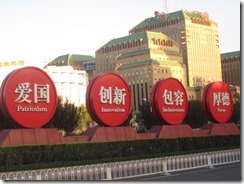 Temple of Heaven. This huge park, at the southern end of Beijing’s second ring road, is also one of the largest temple complexes in China. The temple part of the park is divided into two segments. The first, relatively plain temple is the Hall of Prayer for Good Harvests. This is where the emperor came once a year, to intercede with the gods of nature. The primary, largest and most beautiful temple (which, incidentally, was constructed without a single nail) is the Imperial Gate of Heaven. This temple, even the emperor, who was considered the Son of Heaven, was not allowed to use the front entrance. The complex ends at the round altar, a set of none, concentric marble rings, at the center of which the emperor prayed to the heavens.

What trip to Beijing is not complete without a glimpse at the home of the 2008 Olympics. An easy walk on the walkway between the stadium (i.e, the Birdsnest) and the Aquatic Center (i.e., the Cube) provides a nice view of both of these plus, the tower containing the Olympic logo, the interesting streetlights and two of the city’s more unusually-shaped buildings (yes, that is smog distorting the view). 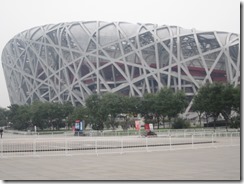 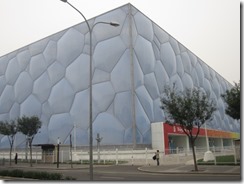 Our plan was to visit the National Museum to explore China’s 10,000-year artistic heritage. Unfortunately, we scheduled our visit for a day on which the museum was closed. However, our ever cheerful, ever helpful and ever proactive concierge, suggested that we visit this museum (which requires advance reservations). This museum, which is divided into two very different sections, spanning six floors, contained lovely collections of bronzes, pottery, calligraphy, historical artifacts, landscape paintings and our favorites, jades. It also contains a special display of  the Dowager Empress Cixi’s household service of yellow (the royal color) dining service. 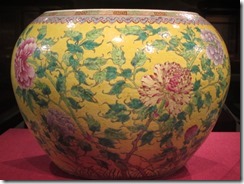 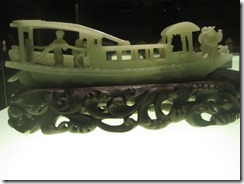