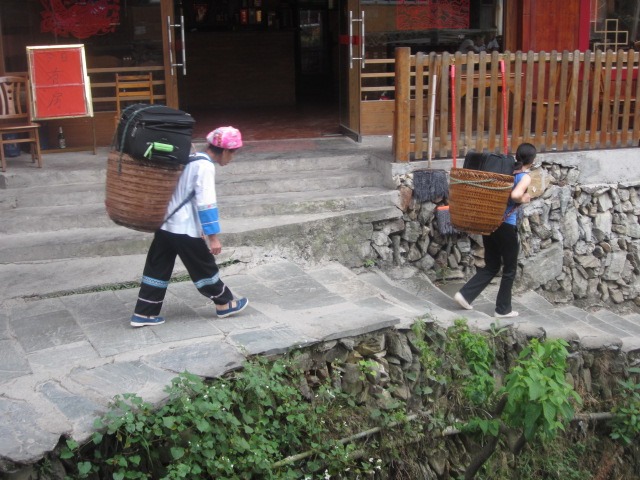 On our previous trip to China, we took excursions through a number of lovely, albeit artificially color-lit limestone caves that were cut into the soft rock by rushing water. This time, we skipped the caves to explore new areas. After flying in Guilin, our guide picked us up to take us to Longji (Longsheng), for a hike through the "Dragon’s Back" rice terraces and ethnic minority villages of the Zhuamg and Yao people.

But before we were able to hike, we had a 3-hour drive at night, over narrow, twisty mountain roads (on which we passed at least two accidents in the deep ditches) to the small, increasingly tourist-centric, Peace Village. We then discovered that we had a 25-minute hike, up multiple long flights of stairs to the inn in which we would spend the night. Since we had not packed for this, we had two fully loaded suit cases (Joyce’s weighed 40 pounds, Tom;s slightly less at 35), plus two backpacks to schlep up to the hotel. No problem. The village women had responsibility for carrying visitor belongs up (and back down) the hill on baskets strapped to their backs. And for the people that couldn’t or didn’t want to make the hike? That’s where the village’s men came in. They carried the people in lounge chairs. 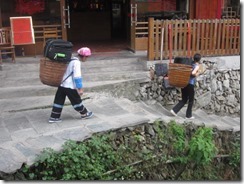 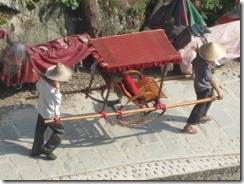 We spent the night at the delightfully rustic, and wonderfully hospitable Li’An lodge. A beautiful room with a spectacular view over miles of rice fields planted on hundreds of terraces built into the sides of impossibly steep, 3 500-foot mountains. These terraces, originally built about 650 years ago, are still being farmed and maintained in the same manner as when they were built. While the farmers counted on their crops for their livelihood, they also gain value from tourists visiting the beautiful countryside. 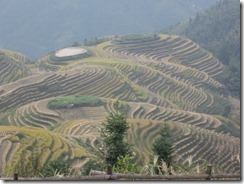 Although the area is known primarily for its rice (which is consumed locally since it is too costly to ship into even nearby cities), it also grows a number of other vegetables and fruits such as beans, faro, sweet potato, corn, chilies, sweet potatoes and soy beans.

After a comfortable night’s sleep and a hearty mountain breakfast, we set off with our guide on a four hour hike, across the terraces and up and down a number of incredible overlooks. Sunscreen and sun umbrellas (which was Joyce’s rain umbrella renamed) were a must for the hot sun beating down at us during the hike. Then down to an even older town, Ping, which is still home to the Zhuang people, the largest ethnic minority in China (with roughly 16 million people). The buildings, virtually all of which were built from local wood, were constructed with tongue and groove construction, without the use of nails. Homes, are typically two stories, with the bottom floor for animals and the top for families. We toured the oldest house in the village and shared a very tasty cup of "oily tea" (made from fried fermented rice, and served with salt, chilies and green onions). The Chinese use this tea to counter oily foods they have eaten (hence its name).

Along the way, we saw farmers harvesting and beating the rice stalks against large wooden drums to separate the grain from the chaff; tending their chickens, pigs and occasional cows; weaving (and selling) baskets and fabrics; and making tofu. We also met an ethnic Yao woman who was only too happy (in exchange for a tip) to show us her hair, which according to custom, is cut only once in her life, at age 18. The cut hair is saved, as is all hair that falls out while brushing and is combined with her current hair into a very large bun. Joyce is envious of their incredibly long hair and the fact that most women never get gray hair. 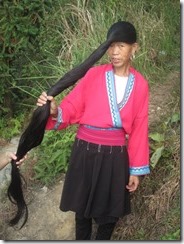 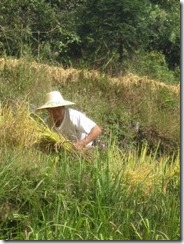 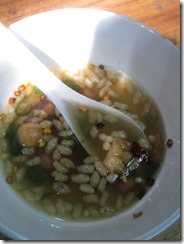 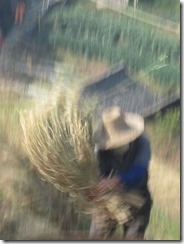 After our hike, our wonderful guide Julie, took us to a local restaurant for lunch where we had a four-course meal, all prepared with local vegetables and pork. The meal included village specialty of bamboo rice–gluttonous rice, mixed with taro and sweet potato, which is steamed and served in a length of bamboo. And since we had to wash our lunch down with something, why not the local beer–Liquay, which is made from Li River water.

From there, our guide took us back to Guilin, where we  spent the night in a non-descript Sheraton Hotel. Dinner was at Roasted Goose. Although the goose was pretty good, Joyce’s pan-fried shrimp were almost imperceptibly small, requiring one to eat the head, tail and shell in one bit and were not very tasty. Also, the shells stuck in our teeth. This is not like eating soft-shell crab, which has flavor. Worse, the restaurant was hosting a big wedding party where we got to watch the 2 minute ceremony (the groom looked thrilled, the bride looked like she wished she was somewhere else) and which had an incredibly loud DJ playing even louder music. Unfortunately to our ears, the Chinese love loud noise. After looking at some other menus, we should have taken our Longji guide’s advice and tried the Left Bank–a restaurant our hotel’s concierge mistakenly told us had a Western menu.

Restaurant error notwithstanding, we did take our guide’s advice to walk around the central city’s perimeter after dark when the lights were on. The central city is surrounded by the Li River on one side and a chain of lakes on the other side. The after-dark shoreline is a veritable light show and is lined by parks and colored lights, shining on trees that surround the shore and reflecting on the water. The lake shores are also graced by a few nicely illuminated buildings, such as a large hotel, a couple of office buntings, and most beautifully, two large pagodas. The riverfront is also graced by a line of about six abstracted bell towers (where the towers and the bells are actually graced by different color lights, creating a beautiful scene.

As nice as the lights were, the parks, and the pedestrian malls that ran off them were filled with people, even on a Tuesday night: People boarding lake sightseeing cruise boats, strolling in the park, participating in rhythmic exercise classes, listening to street musicians, and just thoroughly enjoying the city. All and all, a very pleasant way to spend a Tuesday evening. In fact, any evening. 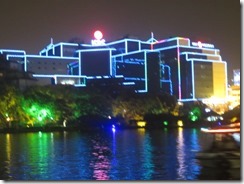 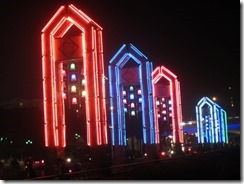