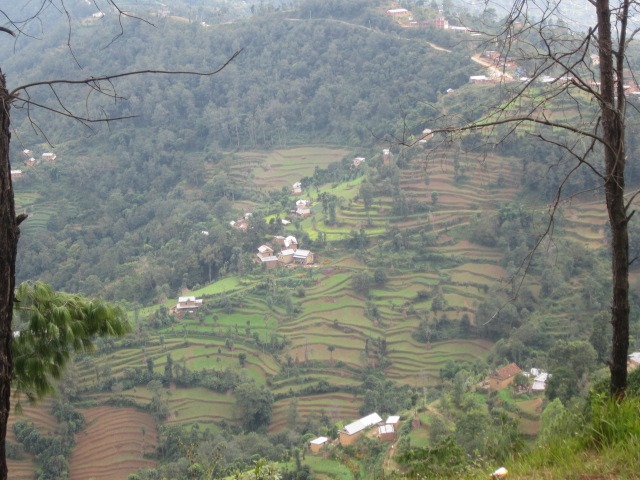 We couldn’t go to Nepal without thinking of a trek. So, we booked a mini-trek (2 day hike) starting from Dhulikheil  with Himalayan Trails (we also used them for a Bhutan trek…more about that in our Bhutan blog). About 30 km south of Katmandu, Dhulikheil sits at the rim of the Katmandu Valley, overlooking the valley on one side, and the Himalayas on the other.

Most treks seem to start with a car ride to get you to the starting point. On the way, we stopped atop a ridge at the Dhulikheil Lodge, where we had lunch (chicken breast stuffed with spinach, cashews and cheese with oregano, rosemary and corn sauce, and a chicken sizzler). Although the food was okay (they were out of the first 3 things we tried to order), the view from our terrace table was beautiful and well worth a stop.

Then we started a 2-hour steadily uphill hike with our guide through incredible views, across terraced rice fields, above wide valleys and to multiple levels of mountains in the distance. We passed through a number of small farm villages, with farmers tending their rice, barley, potato and vegetable crops, along with their cows, goats, and water buffalo. All along the way, as we had seen in virtually all our stops, children greeted us with friendly hellos and waves. 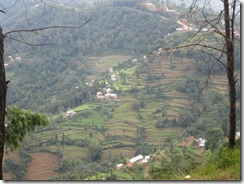 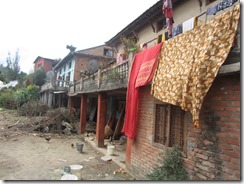 Our ultimate destination the Namo Buddha Resort Lodge, where we would spend the night. This remote, sustainable resort in the middle of the mountains has lovely grounds; the buildings are charming and the restaurant (included with the room rate) serves very good organic, vegetarian food. And early mornings on the patio are not to be missed, with views of the Himalayas–from Mount Annapurna to Mount Karolung. Just tell the staff to wake you at 6 AM if the weather is clear. The small, loft-style units, while interesting and traditional in layout,  are somewhat cramped, the ladders into the sleeping lofts are challenging to climb down for a bathroom visit during the night, and the charming low doorways can become downright dangerous if you forget to duck. Naturally, Joyce banged her head and also missed a step or 2 climbing out of the bedroom loft, banging her elbow. While each unit does have its own toilet and sink, showers are communal. Beautiful setting, intriguing place to stay, great food, and we met  some fascinating people. However, we would be hard pressed to stay more than a night unless we decided to stay in the area for a longer time period. We also saw and shared the facilities with (although did not meet) the son, daughter-in-law and grandchildren of the King of Nepal, who were also staying there.

After arrive at the resort, we dropped off our backpacks and we left for another 3.5-hour hike through the countryside to Dhulikheil Old Town, a 300 year-old town that was on an ancient trade route between Tibet and Nepal. The Old Town, which has been inhabited for more than five centuries, is now a very rural town with one dirt road. Although quite run down, it showed many indications of past glory days, with 3- and 4-story old homes with beautifully carved doors, windows and shutters. The town also has three Hindu temples, including the Narayan and Harisiddhi Temples (both adorned with wood carvings) and the Bhagwati Temple, up a steep set of stairs, with a stunning view of mountains and valleys. 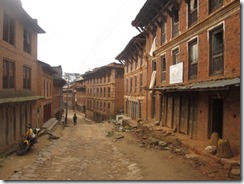 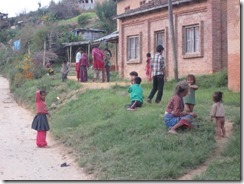 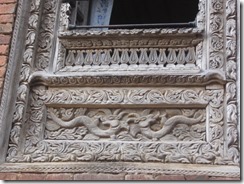 The next morning, we left for the return leg of our mini-trek, about 3.5 hours  of walking that ended in Panauti. Stops included:

Then, after a quick lunch at Banepa Village Restaurant (Mutton Thali and Water Buffalo Momos or dumplings), we were reunited with our car for our return to Katmandu. 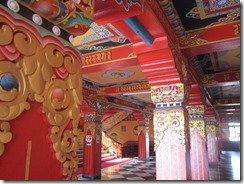 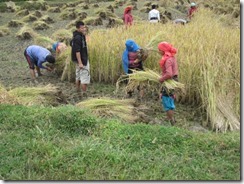 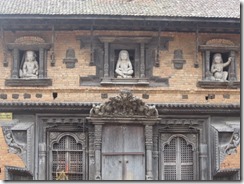