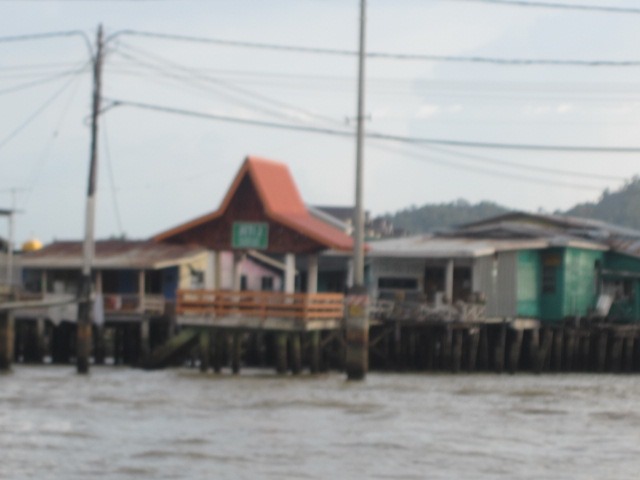 Brunei was a medieval naval power, for about four centuries (from the 15th through the 19th) and controlled the entire island of Borneo (not to speak of some of those that are now part of the Philippines). Today, the island is divided among three countries: Indonesia, Malaysia, and Brunei, with Brunei now occupying just a small, 2,226 square mile sliver of the island. It has, however, become a very, very rich sliver due to coal deposits and, especially, oil which was discovered in 1929. In fact, the country has so much oil that as of 2012, Brunei was the third richest country (measured by per capita GDP) in the world.

Since we were going to be so close to the country and its capital city of Bandar Seri Begawan (BSB), we decided to stop in for a day (literally 24 hours) to see how the third richest country in the world lived. Joyce spent hours trying to figure out how to get there from Mulu Malaysia. We couldn’t find any planes that went there. We heard that buses ran from Miri to Brunei but kept getting a different story each time we emailed bus operators. We finally ended up flying to Miri Malaysia and hiring a driver there to make the 2-hour drive. While more expensive than taking a bus, it was certainly easier—especially since we had to cross the border during the trip.

Our first exposure was, we hoped, not prophetic. After the well-maintained cities and countryside of the Serawac region in Malaysia, as soon as we crossed the border, we were very surprised to see all the roadside litter. While the amount of litter moderated as we got further into the country ad into the city, we encountered it again in BSB as people seemed to think that throwing cans, bottles, and litter on the ground and in the water were the norm in spite of the signs all around of stiff fines for littering.

BSB is relatively new. This isn’t because it’s a new city as it has a 1,000+-year history but because it was severely damaged by WWII allied bombing and then extensively renovated with the country’s soaring oil revenues.

But surprisingly, with few exceptions, BSB is no Dubai. It has none of the architect-designed business headquarters or commercial structures that characterize most nouveau-riche cities. Most of its commercial buildings, in fact, are modest boxes and most locals have shown a preference for living in their traditional water villages along the riverfront.

The Kampong Ayer water villages, which can be explored by the river (water taxi), by foot and via the water village museum, are the most charming parts of the city. They provide a great introduction to the way many of the city’s residents lived before the oil boom, and that many prefer to live now, despite opportunities for other lifestyles.

The 28 riverfront villages consist of stilted homes that are designed to keep them above rising tidal and floodwaters. Home to half the country’s population in the early 1900s, they still house about 20,000 residents, making it the largest water village in the world. These villages, although part of the city, often operate as self-contained communities with their own mosques, schools, and public services. 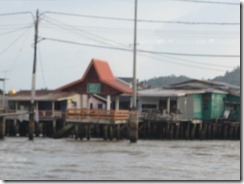 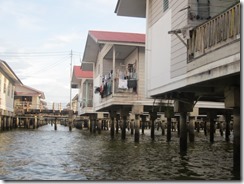 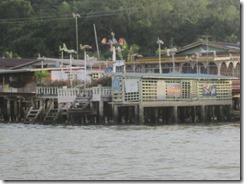 A number of the residents still work in traditional occupations and produce the country’s traditional handicrafts. In fact, many of the villages are still populated by people with common occupations. But, while many of the residents do welcome and some sell to tourists, they have not sought to turn their villages into tourist attractions. Although attractive and well-maintained the pastel-colored homes show the effects of the blazing sun and driving rain. They retain their charm despite, or more likely, because of this.

Monuments to the Sultanate

The royal family, however, makes up for this restraint. Although we have not visited the western sections of town in which the royal relatives live, we read that the villas and amenities, such as the private golf and polo club are beautiful. One, however, doesn’t have to venture out to the burbs to see how the Sultan of Brunei lives. Although we were not visiting on one of the three days per year that the public is invited into the palace, the back of the residence is visible from the river (via water taxi tour) and from a park in the city center. One thing is clear: this is no ordinary residence. In fact, it’s no ordinary palace.

Istana Nurui Iman, or the Sultan’s Palace, which is the largest residence in the world, is four times the size of the Palace of Versailles. The 200,000-square-meter building has 1,788 rooms and 257 bathrooms. The structure does, however, retain a touch of the common man. Filipino architect Leandro Locsin incorporated Malay and Islamic elements into a design that is said to be inspired by traditional Borneo Longhouses. This being said, we must have missed those longhouses that are graced by not one, but two 22-carat gold domes and is illuminated at night. For all the excess, however, it is a damn impressive sight. We could only catch glimpses of it from a water cruise that we took. 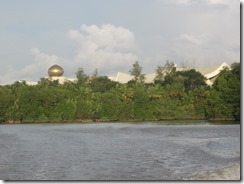 But if you want a closer look around the majesty that surrounds the royal family, you don’t have to wait to be admitted to the palace. All you have to do is visit the city’s number one tourist attraction: the Royal Regalia Museum. This museum is a shrine to the longest-reigning royal family in Southeast Asia and the repository of the current Sultan’s coronation regalia, highlighted by the royal coronation carriage and all types of ceremonial spears, musical instruments and other accouterments of royalty. To enter, one first takes off their shoes, which you normally do for entering mosques, but not museums. Also, as in mosques, you are given a locker for cameras, phones, umbrellas, water bottles, etc. as they are not allowed in the museum.

The first floor is almost entirely occupied by a recreation of the sultan’ s coronation day parade. The remainder of the museum displays the ruling regalia, including the sacred kris (daggers), crowns, ceremonial maces, royal umbrellas, shields and spears; the Sultan’s many medals, and many of the official state gifts he has received. You name it; it’s there. The remainder of the museum is dedicated to the constitutional history of the country, such as the history of the country since 1844 (especially its deep and continually evolving relationship with Great Britain), the origin of the 1957 constitution, and its full independence in 1984.

Although most of the country’s ostentation is dedicated to the Sultan, the city’s mosques also share in some of the nation’s wealth: 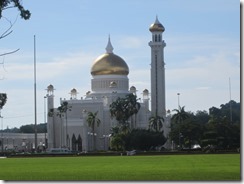 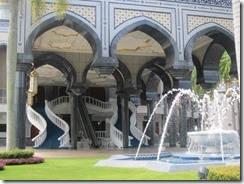 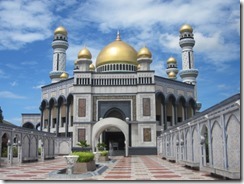 It’s about the grandeur that seems to surround everything to do with the sultan. Is it my imagination, or does there seem to be a common theme? What does it mean?

When we asked our concierge for the best place to go for fresh, good local food, she didn’t hesitate for an instance: Tamu Selera, an outdoor food market that offers all types of food options. After exploring all the options, we gravitated to the section of the market in which vendors specialized in seafood. Our choice: Bob Ume Kitchen Seafood, where Bob guided us through the selections. We began with local clams (dark, chewy, and very good) with a to-die-for oyster sauce with lemongrass, peppers, and onions. What was interesting about the clams is that you had to pry the shells open with your fingers to each of them. As clam lovers know, most clamshells pop open when they are cooked. These don’t. Not surprisingly, Tom had difficulty opening the shells, leaving it to Joyce to do the messy work. Next came a grilled trevally fish (mild taste, white flaky texture, although slightly dry) with mildly tart mango and lemongrass spears. While nice, we ended up eating most of the fish with whatever oyster sauce we could salvage from the clams. And since there was no alcohol in the vicinity—a theme in the entire country–we made do with coconuts hacked open at the top and served with straws.  Towards the end of our meal, the sky opened up with torrential downpours beating on the tin roof that protected customers from the rain. Like all of the rain we have experienced on our trip, it poured hard for about 30 minutes, then stopped. After all, it is the rainy season. 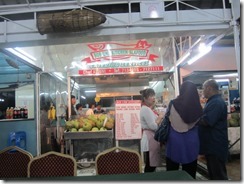 Since Tamu Salera is closed for lunch, and the river market stalls were not of interest, we had lunch at our hotel restaurant (Choices Restaurant at the Brunei Hotel). The prawns on spicy butter egg floss had a nice, interesting taste and texture, although too salty. fish and chips, on which we decided to gamble, were surprisingly delicious.

The Brunei Hotel was a comfortable hotel, whose furnishings reminded me a little of Israel…nothing ornate, little character, but certainly comfortable and serviceable. It was in a good location as it was a short walk to many of the attractions.

Although we tried to cover as much of the city as we could within our allotted day, time constraints and limited opening hours limited our ability to do all we wished. Among the other stops that we hoped to make but were unable to visit were:

I would like to say we will visit them next time, but there’s not likely to be the next time. No nightlife, no alcohol and little to do outside of paying homage to the sultan or religion. And a country where your hands may be cut off if you are convicted of stealing (or so we were told). It’s not our kind of place. Glad we saw it, glad to leave. It is no wonder that many people who live here make frequent excursions to Miri and Kuching in Malaysia.