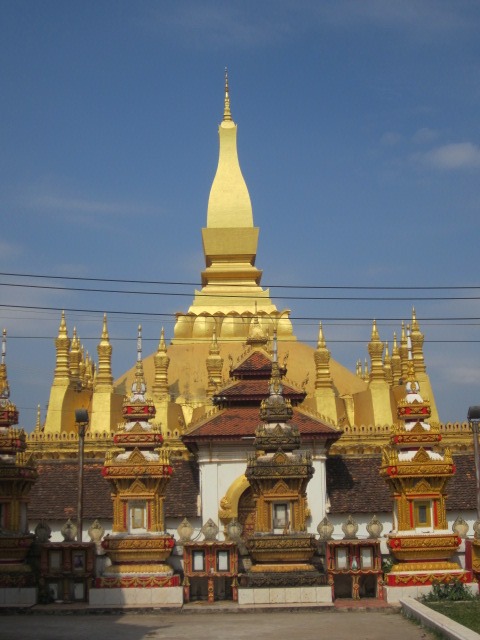 Our our last trip to Cambodia, we stopped by the Golden Triangle area and stepped foot into Laos for just long enough to say we were in Laos and to get our passports stamped. On this trip, we decided to learned more about one of the poorest countries in Southeast Asia. Our first stop was Vientiane, a relatively small capital city that pleasantly surprised us for its level of development, its cleanliness, its friendly and helpful people and its relatively sophisticated restaurants for such a poor area. The central city is small, however, and has very few notable sights. This worked for us since we had less than a full day in the city, however, we wouldn’t have missed much if we had skipped going there. Our whirlwind tour included:

Seem like pretty limited sights for a capital city? We though so. but try as we may, we couldn’t come up with much else to see or do in the in the city (other than the Oha That Lueng Museum which was closed for lunch when we arrived). Other than the long walk from this temple to the other sites (which is best done by tuk tuk), the city highlights can be is easily see in 3-4 hours.

With time for only two meals in the city, we had to choose carefully. We ate at:

Makphet is a highly regarded, and very popular restaurant that employs and trains disadvantaged street children to work under a professional staff in the preparation and serving of “innovative Lao cuisine”.  We began with grilled water buffalo fillet rolls with daikon and ginger in a tamarind dipping sauce (pretty good except that water buffalo, as we discovered, is quite tough). Entrees consisted of a modestly spicy “ancient” fish with green papaya salad, a contemporary take on a traditional dish with lightly fried fish with a slightly sweet, slightly tangy tamarind-based sauce and a very mild chicken curry with pumpkin and mushrooms. Both were very good. So good, in fact, that we had to try a desert. Crispy red rice with mango and pandan sauce with coconut ice cream was a another winner, with its interesting combination of textures and tastes.

Khop Chai Deu, another popular Laotian restaurant, where we had two dishes. The shrimp, melon and pineapple salad had a delicious vanilla lemon sauce that is very similar to a sauce on our favorite San Francisco dim sum dish (sauteed prawns with candied walnuts). Needless to say, we loved it. Our other dish, a traditional northern Lao dish called Laab Pork, was less compelling. It insisted of stir-fried pork scraps with fish sauce, lime juice, ginger, basil and a little chili.The taste was inoffensive, but uninteresting. The grizzle, however, was a turnoff.

The Salana Boutique Hotel was clean, comfortable and conveniently located with accommodating staff. No complaints, but nothing special. Still, if we ever return to Vientiane (which I seriously doubt), we would choose this hotel again due to comfort and location.