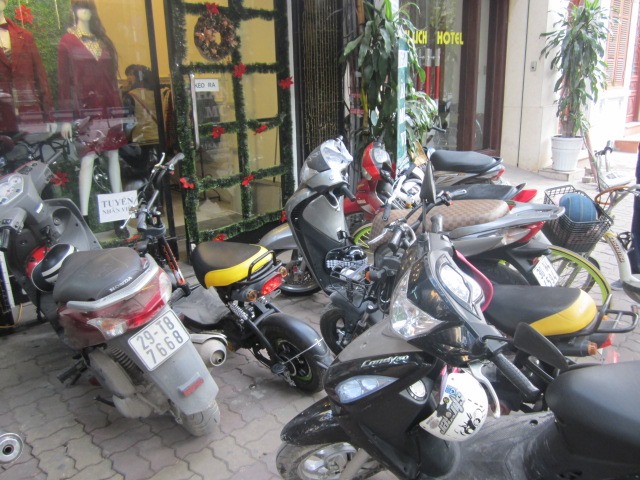 There is so much more to see and do in Hanoi in addition to touring the Old Quarter and French Quarter. Among our most interesting experiences were:

Surviving Hanoi’s Motorbike Culture. One of the first things you will notice is the city is dominated by motorbikes, which are much less expensive and can zip though traffic and small lanes much more efficiently than cars. These mosquito-like transports are everywhere, they continually buzz and honk horns and they attack in huge, unrelenting swarms. (OK, they don’t actually attack. Although they will do all in their power to intimidate you, they will always, somehow, manage to miss you.) They also take over virtually every empty spot in the city. Although they drive primarily on the street, they have turned the sidewalks into parking lots. They seem to take pride in parking in ways that make sidewalks impassable and sometimes block access to stores.We even saw one zip through the aisle of a storefront restaurant into a passageway that led to a courtyard in which it parked. And if a passageway is too narrow for its handlebars, no problem. As one of our guides showed us, they will chisel a groove into the wall in a way that will allow the handlebars to fit in narrow spaces. Meanwhile, everybody finds ways to make money from motorbikes.

Since you can’t escape motorbikes, you have to learn to live with them. This requires continual trade offs between assertiveness and caution; such as by taking advantage of any tiny break in the traffic to begin a slow, steady, predictable path walking through incoming fire and when you are walking in the only space the bikes left open to you, by ignoring their persistent horn honks and continuing of your own course. 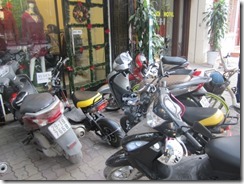 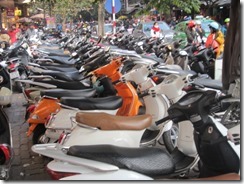 Sampling Street Food. Street food is a way of life in Hanoi. Virtually any type of food you could want, from soups, to stews, to dumplings, to skewers, to fruits, to desserts–and ubiquitous banana leaves filled with some type of sticky rice–is available on every city street. And some of it is very good.  Just as importantly, for city dwellers, eating street food is a social affair. Virtually nobody, we have been told, eats breakfast at home and relatively few eat lunch in their homes. Street food stalls provide a place to catch up with friends, meet new friends, share gossip and learn what’s going on in your neighborhood. Even those who choose to eat inside often cook their food on the streets, both since they don’t have room or ventilation in their homes, or just to catch up with friends.

Visiting Ho Chi Ninh—”Uncle” Ho, who is the father of the country, is honored by a large complex that contains his incredibly popular, massive and imposing mausoleum (which houses his embalmed body, for which there’s is always a long line), his house (a very modest, but pretty teak building in a small wooded park on the grounds of the former Presidential Palace–which Ho refused to live in–and contains many of his personal items), the One Pillar Pagoda (a shrine built atop a single large pedestal) and the Ho Chi Minh Museum (a large, architecturally interesting contemporary building that commemorates his early life and portrays the company’s struggle for independence via imagery). After going through security and following the lines (and getting yelled at for trying to cross a sidewalk in the wrong spot), we got into a line to go visit Ho’s embalmed body. Although the line moved fairly quickly, just as we got to the head of the line, we were halted for a group of several hundred dignitaries to go in front of us. Fortunately, the line does moves quickly. After all, it doesn’t take long to view a body in a glass box. Very reminiscent of Red Square in Moscow when we visited Lenin’s body. While this time, Joyce didn’t have any machine guns aimed at her for walking 5 inches outside of the lines drawn on the sidewalk, we were told to take our hands out of our pockets. Of course, normal respect was required such as no hats,no sunglasses, no water bottles, no talking etc. All I can say is that he was very pale. 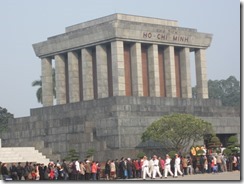 Contemplating the Temple of Literature. A revered religious site and architectural masterpiece that is part of the city’s first (founded in 1076) and most prestigious university. It is also one of the prettiest oases in the city, sheltering you from the constant buzz of motorbikes and the honking of horns (did we mention how annoying motorbikes and horns were?). Although the entire complex is humbling and tranquil, its highlights include the impressive main gate, the central pavilion that surrounds the lovely Well of Heavenly Clarity, the courtyard that houses more than 80 historic (dating from the 14th through 18th centuries) stone stelae (each mounted on a turtle that symbolizes longevity), the wood carvings of the Great House of Ceremonies, the hall that is dedicated to Confucius and the lovely ceremonial bell and drum at the north end of the site. A wonderfully relaxing and incredibly inspiring site. 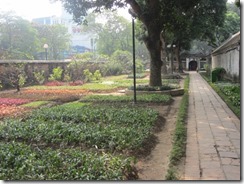 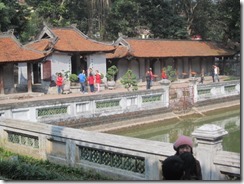 Army Museum, which we passed, but did not enter, on a walk to the Ho Chi Minh complex,  has outside displays of some of the Russian-built planes and tanks the country used in the American War and some of the American planes that it forced down and captured. It is also right next to the Flag Relic Tower, which is a reconstructed tower from the old city citadel. 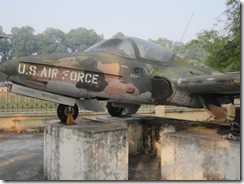 Lazing around Hoan Kiem Lake, the lovely lake and park,in the center of the city, that was the site of a legend surrounding the city’s founding, is the home of the pretty Ngoc Son island temple and a park in which Hanoians love to walk, sit and otherwise admire the surroundings. And just across the street to the west of the lake is a small park with a monument to King Le Than, the man who coordinated the forces to liberate the country in the 15th century.

Hoa Lo Prison, which known as the "Furnace" when the French used it to interrogate political prisoner and the "Hanoi Hilton" when the Vietnamese used it to imprison American POWs (including, most famously, John McCain), is a poignant memorial which we visited on our previous trip, but not on this one. However, one can go inside it and learn more about how the building was used.

Water puppet Theater is one of Hanoi’s most popular forms of tourist entertainment, it is, as the name describes, a puppet show in which the characters (fisherman, boaters, fish, dragons, etc.) perform typically perform about a dozen comic routines in the water. The mood for the skits are set by a nine-piece orchestra and singer playing and and singing Vietnamese music. It may not be high art; but it is entertaining. 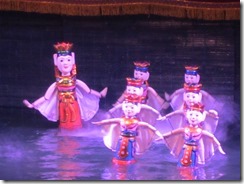 Window Shopping at the Dong Xuan and Hom Markets. It’s not really shopping, since you won’t find anything that a tourist will want to buy, and its not window shopping, since the open stalls have no windows, it is, however, fun to briefly explore the huge, rather inelegantly displayed selections of shoes, clothes, toys and pretty much anything else you want. The Dong Xuan market, which is a wholesale market with interesting street food stalls; a long alley, filled on both sides, with stalls selling any type of food you (or at least locals) could want.