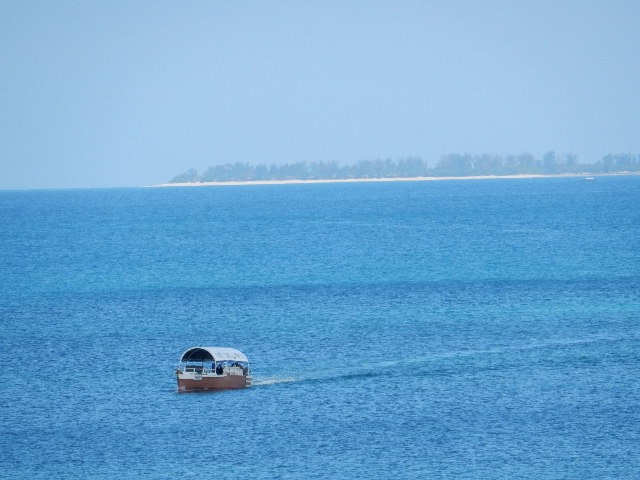 No one would ever accuse us of being beach people. Joyce tends to seek out shade when the sun is shining (too many years of sunburns and sunstroke in her earlier years before good sunscreen was standard) and both Tom and Joyce like to be continually moving versus sitting.  Yet, tell us that we can find coral and exotic fish someplace and we beat a path to the location. Although we no longer scuba dive, we are avid snorkelers. Zanzibar offers a wealth of opportunities for both diving and snorkeling. And right off Stone Town (Zanzibar) is Chumbe Island–the center of a large national coral park that houses more than 400 species of fish and coral. Although it is possible to go on a day trip, we decided to spend a night at the island’s sole resort.

The trip began at a dock by the Mbweni Ruins outside of Stone Town, the ruins of the palace of the Sultan who was forced to flee Zanzibar in the 1963-1967 (confirm) revolution in which the islands gained their independence from Oman. We left on a small ferry for a 40-minute ride to the island, the coral reef National Park and the very eco-friendly Chumbe Lodge. 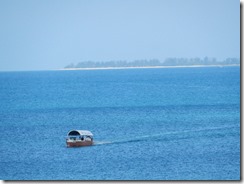 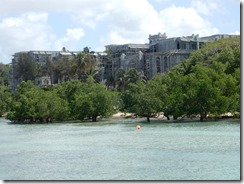 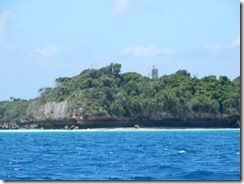 After an orientation we checked into our unit: a very basic, but pretty two-story thatched bungalow with table and chairs, couch, coffee table, hammock, king-sized bed with mosquito net and fans, and solar-powered reading lights and hot-water shower (not to speak of a charming lock box that could charge many different devices while they are locked securely in place). And, oh yeah, no doors. While the floor of the first level and the bathroom walls were concrete, the rest of the structure was made of sticks lashed together with twine, straw mats and other natural materials. Soaps, shampoos, insecticides and moisturizing creams were are all natural. 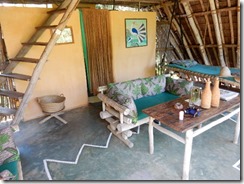 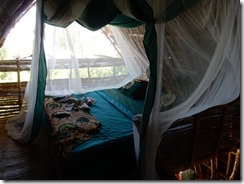 We were then off for a one-hour forest walk during which we explored about half of 2/3-sq km fossilized coral-based island’s ecosystem. Our guide explained the geology, some of the more interesting of the 120 species of trees, including the role of the critical pioneering mangroves and the nutritional and medicinal uses of the fruit of the island’s three huge baobab trees. We learned how different species thrive in an environment with no groundwater (since the coral is so porous, it doesn’t retain water long enough for the trees to absorb it) and about the three of the island’s animal species: crabs (especially the large coconut crabs), bats and a few all but extinct Ader’s Duker antelope (originally introduced for food,with few surviving). 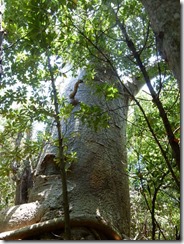 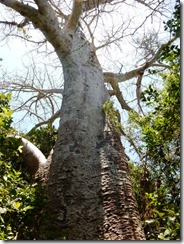 We also explored the island’s two historic buildings: the 131-step, 1904-vintage solar-powered, British-built lighthouse and the small mosque that was built for the island’s lighthouse keeper. Then a decent buffet lunch, which included a light yellow curry sauce with calamari and beef skewers. 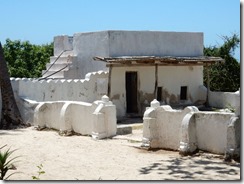 Since snorkeling can only take place at mid-tide, we did not arrive in time for the morning trip. Our chance came at 2:30, when we went about a half-mile offshore via motor boat and slipped into the crystal-clear, luke-warm water. We were surrounded by coral about three to ten feet from the surface: all types of hard coral (brain, plate, table, mushroom and lots of staghorn). We also saw some soft coral (especially small fans), sea anemone, huge sea urchins, starfish and sea clams. And we caught a glimpse of a large spiny lobster in its crevice. And of course, fish: parrotfish, grouper, angel fish, batfish, moorish idols and many others.

Only two things were in short supply. First was fish. Although we certainly saw a fair number, they were much more limited than in other places we have snorkeled. Most importantly was the color of the coral. We did see multiple shades of green, including some very bright lime green, and the tips of some of the staghorn shown bright blue. We even saw a couple bright oranges. These, however, were the exception. Most of the coral was bleached out or algae covered, and most that did have color were very muted greens, yellows and browns. While it was nice and we are certainly glad we experienced it, overall it paled in comparison with some of our favored spots such as Komodo Island Indonesia, Bonaire and our favorite spot of all, Lizard Island on the Great Barrier Reef.

We spent the afternoon walking along the along the beach and in the shallow waters along the shore, swimming through the waves, marveling at the eroded coral shoreline and, when all this became too much, lounging on hammocks with some wine and just staring at the shoreline. Since the typical intertidal walk was called off due the timing of the tides, we were forced to devote the rest of the afternoon up until dinner time to pure leisure–not a concept we typically associate with vacations. And being an island paradise, of course we caught a beautiful sunset. 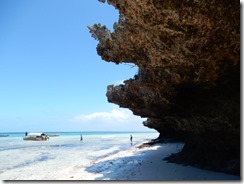 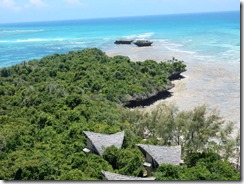 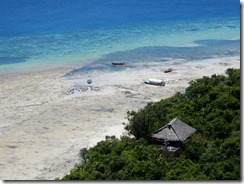 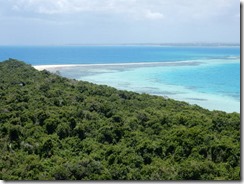 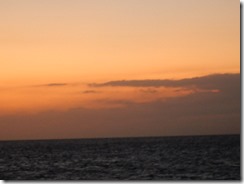 Later came a buffet dinner, which included grilled cigal (a cross between shrimp and spiny lobster), fish curry, vegetable masala and Zanzibar lentils–along with a bottle of Shiraz. The food, while okay, will certainly not make Chumbe a culinary destination.

Then, at 8:45 PM, we went on a crab walk, to explore a few of the island’s 10 species of land crab. First are the ubiquitous hermit crabs, which come in many shapes and sizes, depending on which vacant shells they adopt. We also saw a couple orange crabs. We, however, were primarily after bigger game–coconut crabs. These nocturnal, land crabs can live over 40 years and grow to about 24 inches in diameter and 12 pounds in weight. Although they eat all types of nuts, fruits and seeds. it is so named for its particular fondness for coconuts, and its ability to climb coconut trees to pick them and to crack them with its powerful claws. They were pretty impressive. 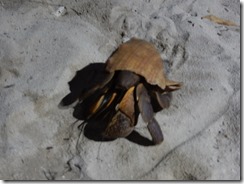 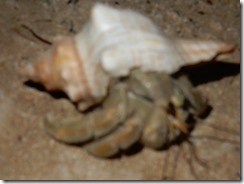 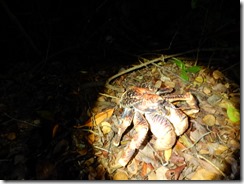 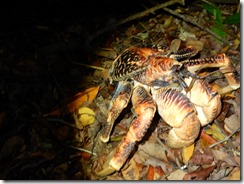 After a good night’s sleep and being gently awoken by singing and cooing birds, we had a large island breakfast (a delicious juice made from passion, orange and mango; fresh fruit with muesli and yogurt; and a choice of breakfast entrees). Then a bit more relaxation before catching our morning boat back to the mainland. After a brief driving tour of the very affluent Mbweni neighborhood, we returned to central Stone Town to learn more about the city and the spice trade.

We were glad that we went to the island, and glad we stayed overnight for a night. But, as active boomers who are not beach people, one night was sufficient. If you like the beach, or came with your children, as several people did, you might enjoy more time frolicking in the water and small beach area.