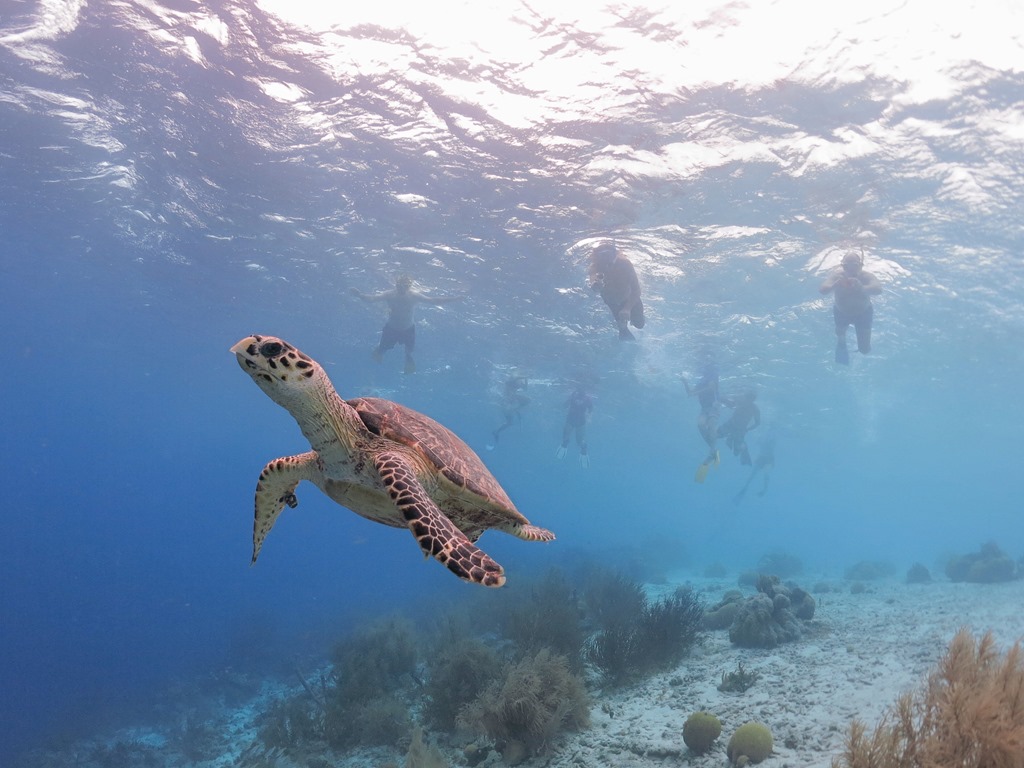 Bonaire and its much smaller sister island, Klein Bonaire, have more than 100 dive and snorkeling sites in protected marine preserves. Combined, they provide access to 57 species of hard and soft coral and 350 species of fish, including 111 endangered species. We had a chance to sample about 10 of these sites–six shore snorkels off the coast of Bonaire and four great snorkels off Klein Bonaire.

We saw dozens of different species. Hard coral included leaf, stag horn, elk horn, vase, barrel, pillar, and the most common, brain and leaf coral. Soft included extensive sea rod, sea plum, dangerous fire coral and elegant fan coral. Nor can you forget sponges, including extensive tube coral and huge, orange elephant ear. Although the coral and sponges did not provide as much color as our previous visit–mostly orange, greens and rust, with occasional splashes of brighter reds and purples–the fish more than made up for these lacks. Among the more interesting of the dozens of species we saw were graceful French and queen angelfish, pyramid-shaped spotted trunkfish, porcupine fish and honeycomb cowfish, many, many schools of blue tang. We saw long, tube-shaped needlefish and trumpet fish, large barracuda, tiger grouper and black margate, majestic blue heads and thousands and thousands of beautiful, small, iridescent blue chromics. We also saw at least half a dozen species of beautiful parrotfish, including queen, rainbow, black, stoplight and princess. We also saw other species altogether such as giant anemone, christmas tree worms (red christmas tree-shaped organisms with that, when one snaps their fingers next to them, snap back into their protective coral).

Rather than attempt to mention everything we saw at each site, we will just provide a few of the highlights and our subjective, high-level overviews of each (we did not have an underwater camera).

Klein Bonaire Snorkeling Sites. Klein Bonaire, a small, desolate desert island that is about a half mile of the west coast of its larger cousin island, is generally viewed as having the best snorkeling and diving in the area. Based on our experience diving and snorkeling in other contenders, such as Grand Cayman Island and Belize’s Ambergris Cay, we have no argument with this assessment. It offers something for everyone, with a huge selection of hard and soft coral, fishes and a wide range of additional seaside. While motoring out to the the island you often pass flying fish. Near the shore, you have to struggle to remain above the very shallow coral while snorkeling. One hundred feet from shore, you reach a wall that plunges a mile into the deep.

You can find three ways of getting to and snorkeling off Klein Bonaire:

We chose the third approach, entrusting ourselves to the capable hands of Sea Cow Charter Tours. We went out with Sea Cow Tours on 2 separate days to do their double dip snorkeling (snorkeling in 2 different spots each day). Before we entered the boat, we were watching (while sitting at a lunch spot by the boat) Gea and Henk, the owners, prepare the boat. We were very impressed watching Gea cleaning the masks and snorkels that people would be using. Usually we see people only doing a quick rinse and wipe of the mask. Gea was using a cloth and diligently cleaning every nook and cranny. You know they were clean and sanitized.  Once on the boat, we were offered water, punch or soda as we made our way to the first snorkeling site. While on route, Gea gave excellent instructions in an easy to understand manner to put novices at ease with snorkeling.
She (as well as Henk and the crew) switched between languages at ease (the primary language was English). Throughout the trip they made sure that everyone was comfortable with snorkeling and went out of their way to be friendly and helpful. When Joyce was having problems with her personal mask, Gea quickly offered up her mask as an alternative. Homemade food, including breads and sandwich rolls were offered and, when snorkeling was done, a happy-hour punch was available. We have been on many other snorkeling tours throughout the world. Gea and Henk run one of the best operations that we have experienced. You felt that they really cared that you enjoyed yourself and walked away with an excellent experience—which we did. That’s why we went back for a second day of snorkeling with them—something that is very unusual for us.

The sites we visited were:

Gea and Hank also provided a very good explanation of the Bonaire Marine Preserve, what we were likely to experience at each site and background about the area. Among the most interesting thing we learned is the incredible role parrotfish: first in the way in which the largest female converts into a male when a male dies. Second, and most impressive, is the ubiquitous, protected (due to the huge value it provides) parrotfish’s role in creating the area’s landscape. By using its beak-like teeth to pry algae from coral, it not only cleans the coral, but also chews off and swallows a lot of the fossilized coral. Although it can’t digest it, it does break it down into sand. An individual large parrotfish can create more than a ton of sand over its lifetime. All of these voracious eaters combine to create a full 70 percent of all the area’s sand, compared with only 30 percent for all the erosion caused by waves.

We didn’t have an underwater camera with us, but here are some pictures taken by a professional photographer on our boat. 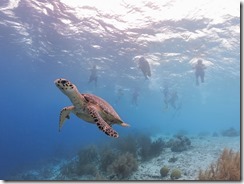 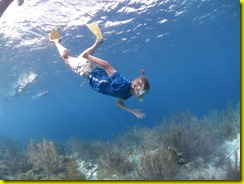 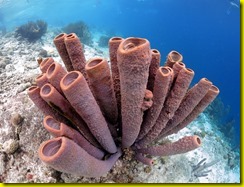 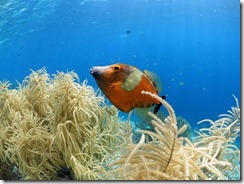 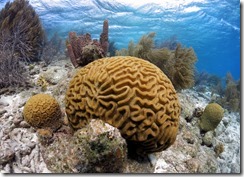 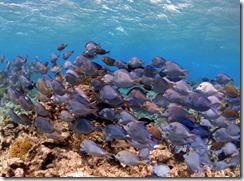