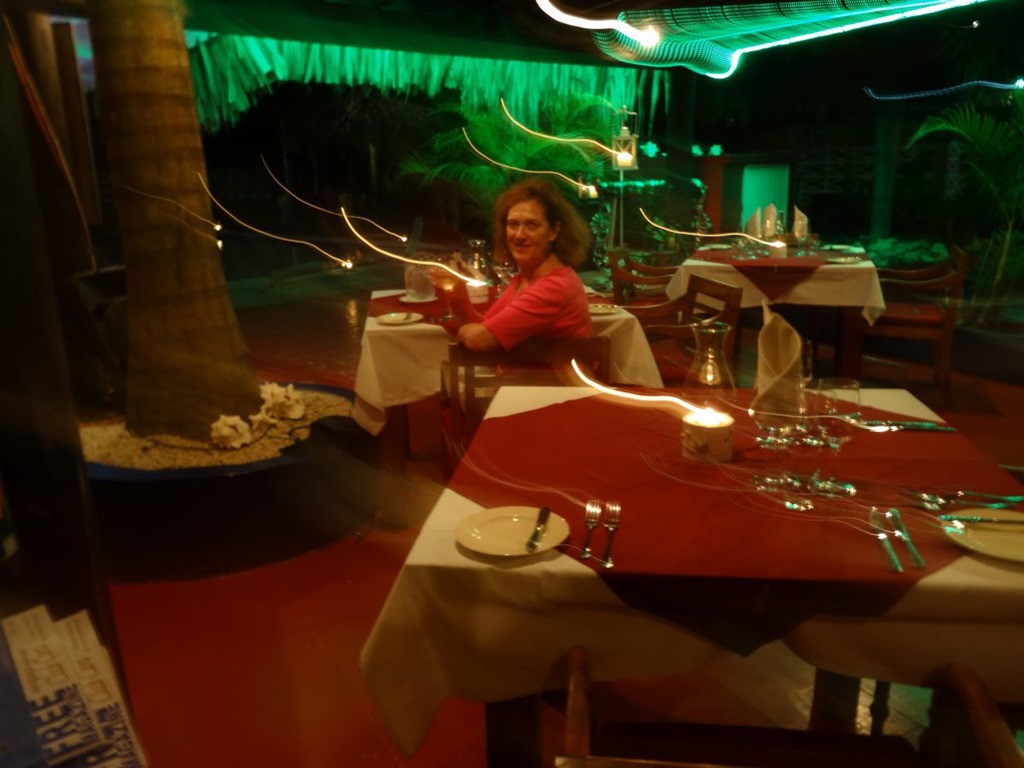 Although we only had five days (lunches) and four evenings (dinners) in Bonaire, we tried, as always, to make the most of our dining opportunities. And since we were on an island, the vast majority of our meals consisted of seafood. This, however, did limit our choices, since the only four types of fresh fish that were available were mahi mahi (which we do not enjoy), tuna, wahoo and for dinners (but not lunches), barracuda.

For dinner, after trying the three most highly recommended restaurants on the island, we were so impressed by one–Chez Madeleine–that we decided to return to our final evening. The three restaurants, in declining order of our experiences, were:

To ensure that the wonderful food, atmosphere and service wasn’t a fluke, we felt compelled to go back again (something that we rarely do) on our final night on the island. The evening’s amuse bouche was a Parma ham wrapped cantaloupe with tomato and chive. After a bison carpaccio appetizer with arugula, parmesan and quail egg, we had two entries: grilled tuna with béarnaise sauce and veal prime rib with a cream truffle sauce sprinkled with black truffles (both came with the same vegetables as the previous night), and surprise: both the food and the service were superb. We would whole-heartedly recommend this restaurant to anyone who wants to experience a small intimate setting, great service and great food. 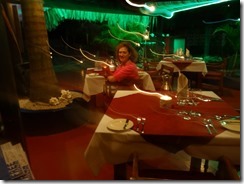 When we are on an island or by the shore, we get into something of a lunch rut: We love going to atmospheric, outdoor, shoreline restaurants with views to eat grilled sandwiches with the freshest fish. The only exception–where we have a chance to experiment with good local food, which we did at Posada, where we had one of our favorite lunches

Two Food Trucks. Yes, Bonaire has them also. We split a lunch between two trucks:

We stayed at the Bellafonte Hotel, which is just a short 5 minute drive from the airport and within walking of one of the popular snorkeling beaches in Bonaire. You do need a car to go anywhere, but you need a car to go anywhere in Bonaire unless you plan to miss the beauty of the island and just stay in town. Plus, driving around is very easy. We had wanted a junior suite, which was unavailable the first night so we settled for the entry level room the first night and then transferred to a junior suite. The difference in the rooms is basically additional space with a separate living room and a view, with the junior suite giving you a beautiful water view. Upgrade if you can. Both do have a small cooking area, coffee maker, refrigerator and toaster. The junior suite also had a stove top. As you would expect in a place where people are very friendly and helpful, the staff at the Bellafonte were A++. Every single person was friendly and very helpful, patiently answering our millions of questions, recommending snorkel spots and restaurants. All in all, we were very pleased with this hotel and highly recommend it—as long as you have a car. And, if you are getting a car, ask the hotel if they have provide any discounts (we got a discount through the hotel by booking in advance).