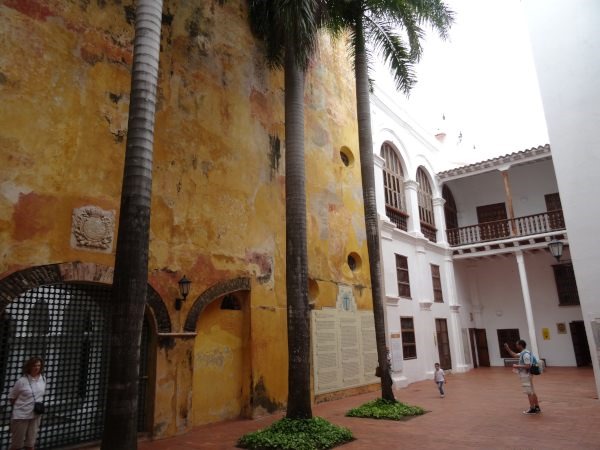 No visit to a city is complete without us exploring some of the more interesting museums. Cartagena was no exception.

Palace of the Inquisition

The huge and beautifully restored palace, at the head of Simon Bolivar Square, has gruesome history which is told in the first floor of the museum. It was the local headquarters of the 200 year-long long Spanish Inquisition (1610-1821) which punished crimes including heresy, blasphemy, bigamy, adultery and anything else that seemed appropriate to the powers of the time. The Inquisition began by requesting people to turn themselves in in return for leniency and then moved onto forcing and enticing people to inform on others that they suspected of crimes. The museum described the initial means of assessing guilt and innocence (anyone weighing more than 1 kilogram per centimeter over one meter in height was presumed guilty), and the court’s “perfect” record of prosecutions, whereby everybody arrested was ultimately found guilty. It also showed relics and reconstructions off number of the torture devices used to extract confessions–devices including garrotes, racks, sticks and devices for crushing sculls and fingers, as well as tools for punishing the “guilty”, such as axes, guillotines and gallows. It didn’t look like a pleasant time was had by anyone accused of a “crime”.

The third floor of the palace portrayed the history of Cartgena though a combination of explanatory panels (mostly in Spanish), maps, models and artifacts. It discussed life in the area for the 3,500 years before the Spanish arrived, the creation and growth of the city and its evolving role in trading among, and eventually administering other Latin American Spanish colonies, and then the declaration of and fight for independence, including the deadly siege the Spanish laid upon the and city to subdue it, the reprisals they enacted and the ultimate 1921 victory of Simon Bolivar’s followers and how the victory in Cartagena became the last battle that persuaded the Spanish to withdraw from the continent. It ended with a painful description of the post-revolution decline of Cartagena caused by the loss of its leaders (from death during the Spanish siege and reprisals), the silting of the canal and a combination of emigration and plaques–and the gradual rebirth at the end of the 19th and beginning of the 20th centuries.

Another floor of the palace is devoted to explanations of the the renovation of key Cartagena buildings and the processes that are followed. 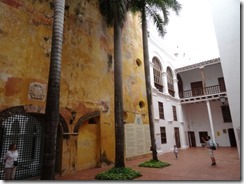 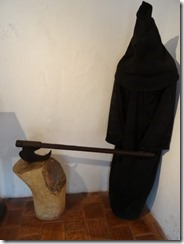 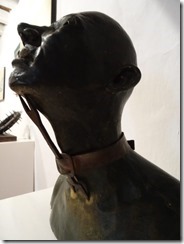 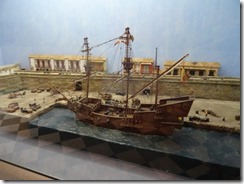 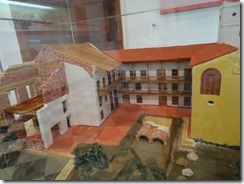 Although we had a particular interest in the history of the city, we were also anxious to get a sampling of its art. While we did find and look through a few galleries, especially those around Plaza de La Aduana, we also wanted to explore some of the work that was deemed to be “museum-quality”. While small, the museum does have a number of interesting pieces, and is well worth a quick visit.

This a tiny version of the huge Bogota museum (with a couple of its main galleries closed for renovation) that provides the same, albeit much more brief, historical and cultural perspective on the country (with particular detail on its development and use of irrigation system) and organizes its much smaller gold displays in the same general way (by region/by period). It underwhelmed us after the amazing Bogota museum, but was a nice introduction to the evolving role of gold in Colombian cultures.