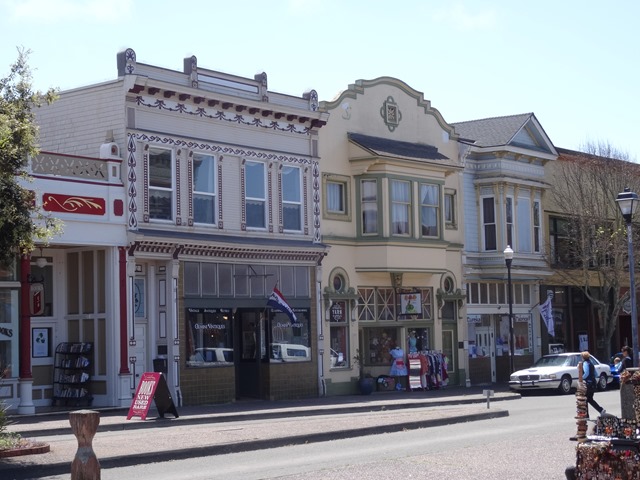 All three of these Humboldt County towns have their charms; especially in the form of grand, well-maintained Victorian mansions and homes. Each of the towns’ growth and prosperity was funded by a different source. Arcata, for example, earned its initial fortune by selling mining supplies to aspiring gold prospectors: Eureka from lumbering, it’s Trinity gold mine and to a lesser extent, fishing: Ferndale funded construction of its "butterfat palaces" from dairy farming. All, however, have generally recovered from bad times, rebuilt their heritages and now attract significant number of tourists.

Each has its charms and attractions. Arcata has its central Plaza, university (Humboldt State) and wildlife sanctuaries. Eureka has its Victorian Old Town, it’s especially lovely Carson Mansion (where we once spend a glorious night alone, free to explore the wonders of its meticulously restored and decorated rooms), it’s harborside Boardwalk and its museums and historic parks. It is also home to wonderful North Coast Coop (with its wonderful variety of fresh produce, meats and seafood) and the Kinetic Sculpture Museum (which has examples of a number of the more artistic and elaborate of these contraptions from the decades of races). See our following post for our impressions of this year’s Kinetic Sculpture Race. Ferndale, meanwhile, appears to be the most affluent of the three. It is also its own history museum and historic park. The entire town, in fact, has been designated as a state historic landmark. It’s attractions include its large number of beautifully restored Victorians, an amazingly landscaped, terraced cemetery that climbs a hill across from a pretty church. Each of the towns, and indeed the entire region, however, does share a common thread. Humboldt Country, which has become the cannabis-growing capital of the country, still vividly reflects the hippy heritage of the its 1960-era settlers. A disproportionately large percentage of residents are in their 60s and 70s, long hair, long beards, jeans and flannel shirts are universal and the aroma of marijuana seems to perfume the air.

We have always stayed at the Carson House (including one stay where we had its entire historic Mansion House to ourselves) and eaten at its 301 Restaurant. Although we stayed at the Carson House (although it in the mansion) again this trip, we decided to pass on dinner at 301, which has always been our favorite. That was until it apparently redefined its traditionally upscale menu and comprehensive wine list to more popular tastes and prices.

Sea Grill (Eureka). We ordered two entrees. The Alaskan King Crab legs were previously frozen, but still quite good, without the excess of salt that we have come to expect with this dish. Joyce had less luck with her halibut with garlic butter sauce. The fish on the first plate was dramatically overdone. While the replacement was done perfectly, the garlic was so strong as to totally obscure the fish. Since we ordered a bottle of wine in the lounge, before seeing the menu, we ended up with a Pinot (Clark and Telegraph Belle Glos) that while wonderful, was a bit much for the dishes we ended up ordering.

Victorian Inn (Ferndale). We were in the mood for a light dinner. We shared a fried calamari (lightly breaded and fried with a nice soft texture) and dungarees crab cake (lots of meat, lightly pan-fried and good taste). These with a light 2013 Handley Pinot Gris made for a nice combination.

Cafe Waterfront (Eureka). We took lunch just after the race left Arcata Plaza. We, after all, needed substance to prepare for a tough afternoon watching the kinetic sculptures’ travails navigating up the Manila Dunes and down Deadman’s Drop. We ended up with two dishes: beer-battered halibut and chips; and a crab melt sandwich with tomato and jack cheese on sourdough toast, which came with a cup of tomato soup. We enjoyed both of the dishes. After exploring many of the options, we returned for Sunday brunch. Although our halibut cakes with eggs were less than we had hoped, the seafood scramble (with scallops, bat shrimp, tomato and dill, were more interesting and tasty.

Victorian Inn (Ferndale). After dinner at the Inn, we decided to return the next day for lunch (not there are many choices in Ferndale). What a difference. My chicken and mushroom pot pie had a thick, gloopy, artificial tasting sauce. Joyce tried twice to get a medium rare burger. Both times, it came out well done. Interestingly, not only did our server not stay at the table to see if the second was okay, she never even returned to the dining room! After waiting for 20 minutes (by which time I had eaten all I could of my meal) we called another server who took the burger, gave us our check (sans burger but no word of apology for the kitchen) and left.