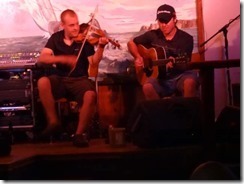 We ate lunch at four restaurants in towns in and surrounded by Cape Breton National Park:

Cheticamp, the town at the western entrance to the park, does have a handful of full service, generally family-oriented restaurants that offer a selection of comfort foods (especially pizza), standard popular appetizers, meats, pasta, local favorites (such as poutine). We, however, were there for the local, just off-the-boat seafood. Although we sampled local oysters, mussels, fish (haddock and sole) and crab, we were there for the lobster. While two of the three recommended restaurants offered only chicken lobsters (1-1/4 pounds), the third rang our bell with lobsters that started at two pounds and went up from there. We tackled these two-pounders both nights:

Le Gabriel. The restaurant is divided into two sections. The dining room, where we had reservations for a nice, spacious booth, looked comfortable and service appeared to be good. We, however, chose the larger, much less comfortable bar, despite the crowd and its small tables. The reason–the bar had a band (see below). Besides the tiny tables, the room was noisy and the service was virtually non-existent. In the spirit of experimentation and diversification, we ordered one two-pound lobster (which it our pleasant surprise, was hard-shell (which offers more meat per pound than soft-shell) and the Captain’s Platter, which came with large portions of broiled haddock and sole and steamed shrimp, mussels and lobster. Our third surprise came when we got the bill–especially when we adjusted the price for the favorable exchange rate and an additional 10 percent discount available through our hotel. This uncooked lobster, for example, which would have cost about $30 from the primary San Francisco lobster distributor (which we would have steamed ourselves), ended up costing the equivalent of $19 U.S., fully cooked, served, and with a baked potato to boot.

After this, we decided we couldn’t afford to eat anything but lobster for the rest of our Nova Scotia trip! So the next night, we returned (this time to the dining room) where we both had two-pound lobster dinners. Given the restaurant’s and the entire town’s virtually nonexistent wine list, I became quite familiar with local Alexander Keith ales, both his IPA and his Amber. Not bad, especially give the options.

We also ate at one restaurant in the town of Pleasant Bay, a small hamlet that is carved from the center of the park.

Rusty Anchor, in the town of Pleasant Bay, where we continued our lobster-eating tradition with a naked lobster roll (although not in the same league as that from the Wiscasset, Maine, Red’s) and a somewhat over-mayo’ed lobster club (with tomato, cheese and a fried egg (which distracted from the taste of the lobster) on lightly toasted white bread. Okay, but not a favorite.

Restaurant options in Ingonish, at the eastern entry to the park, are quite limited. Lunch required a bit of a search to find our lobster roll (although we did explore alternatives with an open mind, none of the options stacked up). We end up at:

The only two fine dining stops are the Keltic Inn and inn at which we did stay, the Seascape Coastal Retreat. We chose to eat at home.

Seascape Coastal Retreat offers choice of a two or three course meal for hotel guests. We decided to skip desert and opted for the 2-course meal. Appetizers were smoked Atlantic salmon with capers, red onions and mild horseradish sauce; and a mildly disappointing Atlantic shrimp curry in a popadum (a light flaky dough) basket. Entrees consisted of roasted Atlantic salmon topped with a tomato, olive and caper sauce and seafood pappardelle with lobster, shrimp and scallops in a light roasted garlic cream sauce with herbs and peas. Both were OK, but the pappardelle, in particular, lacked taste. Although the wine list was limited, it, unlike our other restaurants, they did offer wines from outside Nova Scotia. We selected a Brouilly that, while not our favorite, did work with our dishes. In hindsight, we wished we had gone to the Keltic Inn instead.

We found, by far, the most entertainment options in Cheticamp. Although the town has limited amenities, one thing it has in abundance is evening entertainment. Although there is a nightly performance of a historical musical comedy, we decided to take our music straight. Over the course of two evenings, we heard four musical groups. First, came the country and light rock band that played at Le Gabriel restaurant. Nothing special (especially the singing), but we still appreciated the music. But the town’s primary musical entertainment is fiddling–Irish fiddling. We ended up seeing three different Irish fiddlers over our two evenings in Cheticamp. The first, at the Doryman Pub, was accompanied by s guitar and keyboard. Although not exactly our taste in music, we appreciated the fiddler’s skill and energy. The second, at All Aboard restaurant, was a soloist who lacked any energy. We, however, hit the Irish fiddling jackpot our second night at Le Gabriel with Colin Grant and his keyboardist. Fun, lively, engaging music played with a verve that engaged the entire audience. By the end of the performance, we were all calling for an encore, which we unfortunately did not get. In Cheticamp, we stayed at the Maison Fiset house. This was an incredible place mainly due to Lyne, the manager, who was amazing. No question or request was too much for her. She was all service was a capital S. The rooms are nice, don’t get me wrong. We stayed in 2 different rooms. The king size suite was spectacular. Great view, Jacuzzi, deck overlooking the water. All you could want except for a plug by the bed. Our second night was in a queen bed (which was actually more comfortable than the king the night before). The queen had plugs by the bed, but was smaller and only has a small bath/shower. While it had a balcony, the balcony didn’t have much of a view. Overall, get the king suite if you can and ask for softer pillows. And ask for the discount coupons they have for some of the restaurants.

In Ingonish, we stayed at the Seascape Coastal Retreat. These small 1 bedroom huts have nice views (at least ours did), a bedroom (queen bed), small living room, galley kitchen bathroom and a small porch. It was clean, compact and comfortable. However, while we understand that they have to make their money during the “season”, we  felt that it was over-priced compared to other places where we stayed. Still, it is in a beautiful location, the service is friendly (they put a little snack in your room during the afternoon), and it is clean and comfortable.