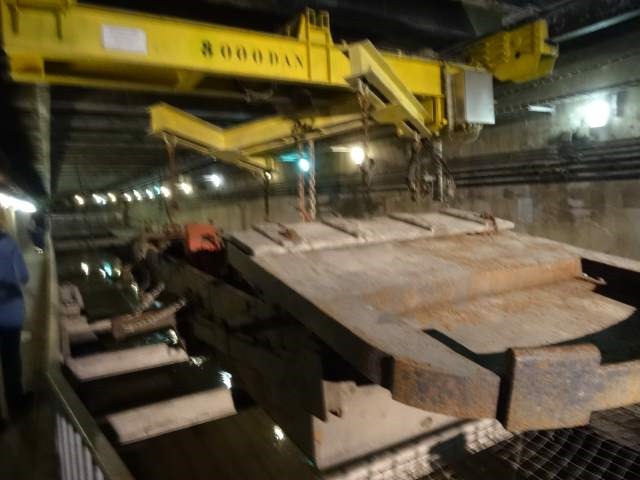 One could spend months just in Paris’s many museums. Here are a few of our favorites.

The depths of a major city sewer system, with water flowing under your feet, may seem like an unusual subject and location for a museum. But Musée des Égouts has been a popular site for years. After walking several stories below ground, you reach the section of the city’s main system. As you walk through the tunnels, with pumps humming, pipes overhead and untreated sewer water flowing alongside and under your feet, you know you are in for a different experience.

The museum traces the history of the city’s water and sewage system from the first century when inhabitants of Lutetia (as the first settlement on Ile-de-la-Citi was named) pulled their water directly from the Seine and dumped their sewage onto the streets and the land where the earth served as a natural filter. Water needs and sewage problems, however, emerged as the city grew. But in the 4th century, the Romans had much greater needs and wanted public water (including for the baths) to flow naturally into the city, rather than having to it up from an increasingly polluted river. Therefore, they built a system of aqueducts to supply fresh water (albeit not enough for the city’s growing needs). Most people still had to carry, or pay others to carry water required for their personal needs from the river.

Although they did provide open ditches for sewer water. Rather than let it flow through the streets, they did not address the growing sewage problem which, by the Middle Ages, was largely responsible for plaques. By the 1300s, they began covering the ditches, but still allowed it to run directly into the river.

The first initial efforts at systematically addressing the problem came during the Renaissance, when the first hydraulic pumps were installed and, between 1490 and 1550, all houses and businesses were required to dig and dispose of waste in cesspools. Although this helped somewhat, the modestly filtered waste still flowed into the river that was still the primary source of the city’s water.

By the 1800s, Napoleon I (Bonaparte) began installing steam pumps and digging new canals to bring fresh water in from less polluted sources. The river, however, was becoming more and more polluted. It took until 1854 before the issue was seriously addressed. At that time, Napoleon 3 assigned Baron Haussmann to address many of the city’s problems. In addition to designing the city to eliminate cramped, narrow streets and create wide avenues and boulevards to open the city to light and to facilitate transportation and the creation of a long-term infrastructure, he also appointed Eugene Belgrand to design and spearhead the creation of a water system that would both bring a sustainable pure water supply to a growing city and to also create the foundations for a modern sewage system that would not only efficiently remove wastewater, but also treat it before it was released into the river.

Belgrand created a more modern system of aqueducts, built reservoirs to store it until it was needed, create a system by which less pure, but still usable water (effectively gray water) could be used for less sensitive purposes (such as for washing streets) and for creating a long-term means of collecting and treating all wastewater before discharging it into the river. The plan mandated that by 1894, all buildings would have to install drainage systems that channeled rainwater and wastewater into the new sewer system (rather than into cesspools).

Not only did he create the system, he also designed machines and processes to continually flush and cleanse the sewer system, filter out and return dirt and sand to the ground (especially farm fields), separate bio-waste from and aerate the water before returning it to the river. This system has been continually expanded and enhanced, but not significantly changed to the point that it now handled and treats more than 1.2 million liters of wastewater per day.

The museum not only traces the history and explains the details of the operation of the current system. It also shows you some of the actual equipment that is used, as well as models of historical gear—including the system of large hollow balls that Belgrand created to clean the sewers—a system that is still used today.

L’Orangerie is one of our all-time favorite museums. Not only does it contain two oval rooms (just the shape and size Monet requested) to display two, huge, four-panel murals of his Giverney garden, it also contains the collection of Guillaume Apollinaire and his wife. Apollinaire is the art dealer who put many Impressionists and Neo-Impressionists on the maps

The museum devotes one full floor to the Monet murals, and another floor to the Apollonaire/Walter collection. Monet specifically donated both series of Nymphéas (water lily) panels to the French government, to be housed in specially designed oval rooms and illuminated by a diffused light, in the Orangerie. Each room contains four panels that effectively wrap around each room to provide 360-degree experiences: A full-immersion experience that is almost like visiting the Giverney gardens in person (see our post on our Giverney visit). 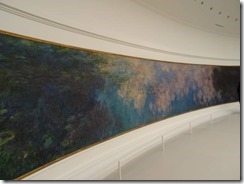 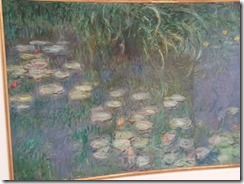 The History of Modern Art­­–In One Family’s Collection

The basement houses the extraordinary Apollonaire/Walter collection. It contains an overview of Apollonaire’s role in encouraging and assisting in the creation of four of most important artistic movements of the large-19th and early-20th centuries: Impressionism, Neo-Impressionist, Cubism and Fauvism. The exhibit provides an incredible overview of emblematic works from each of these eras (as well as a display of his office, and models of his rooms). The exhibit is organized by artist. It includes work by virtually all the most famous and influential artists of the period, plus those of some who are much less known. Among the masters are:

Renoir worked with Monet to develop plein aire painting and experimented with the use of broken brushwork to open up his painting. This collection includes two dozen paintings through all stages of the artist’s career; from portraits to landscapes to still-lifes, including some of his most recognized work. 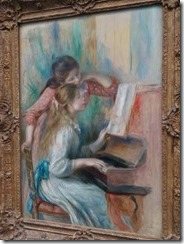 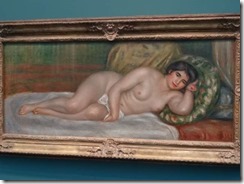 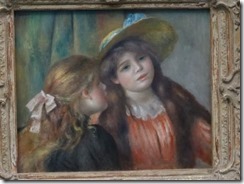 Cezanne crosses all boundaries. He began working with Picasso, then with early Impressionists to move almost to sketching where he served as a precursor of much modern painting by emphasized geometric shapes, structures and volume. Citing his contributions, Picasso called him “the father of all of us.” 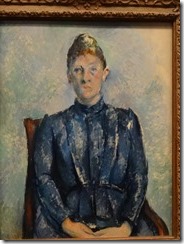 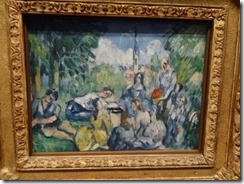 Matisse began as a Neo-Impressionist but then, in the early 20th century, “liberated color” by creating Fauvism. Then, later in life, he evolved to adopt more African, Moorish and Moroccan influences and, eventually, as seen in his Odalisque series, even began incorporating some classical elements into his work. 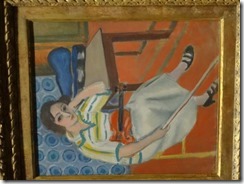 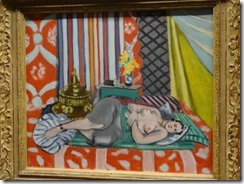 Picasso was a friend and co-lover of African art, but Guillaume was not his dealer. Paintings are, therefore limited, especially to some in the artist’s Neoclassical and Analytic Cubist periods.

Deran constantly evolved his style from Fauvism, to Figurative, to Classical in painting everything from portraits to landscapes to still-lifes. 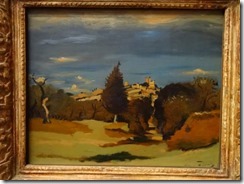 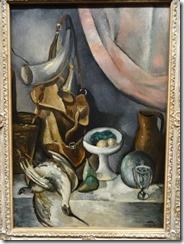 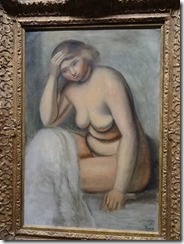 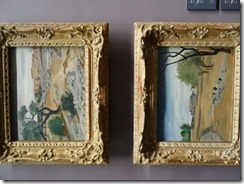 Modigliani began working with Brancusi as a modernist structure and in his short, scandal-laced career (and life), moved into figurative drawings of people with simplified forms. 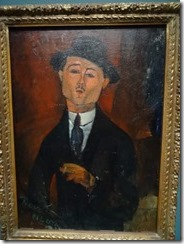 Among the lesser known, but still very talented artists are:

Marie Laurencin who was a member of the “Picasso Gang” embraced Cubist and Fauvist techniques in creating figurative forms in pastel colors. 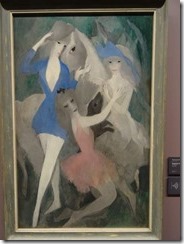 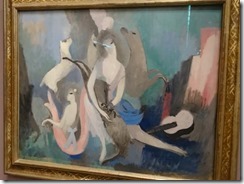 Maurice Utrillo, a mentally unstable alcoholic, focused on urban scenes (especially around his native Montmartre), culminating in his “White Period” where he applied heavy layers of white impasto with a palette knife. 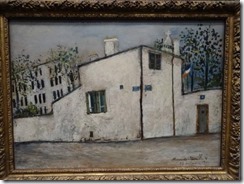 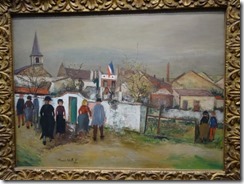 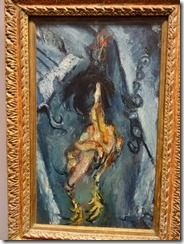 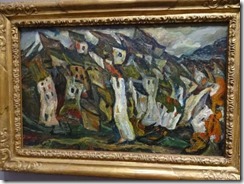 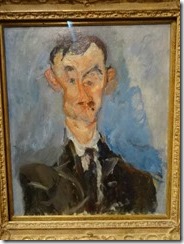 Overall, that museum has an extraordinary collection and deserves to be much more popular than it is.