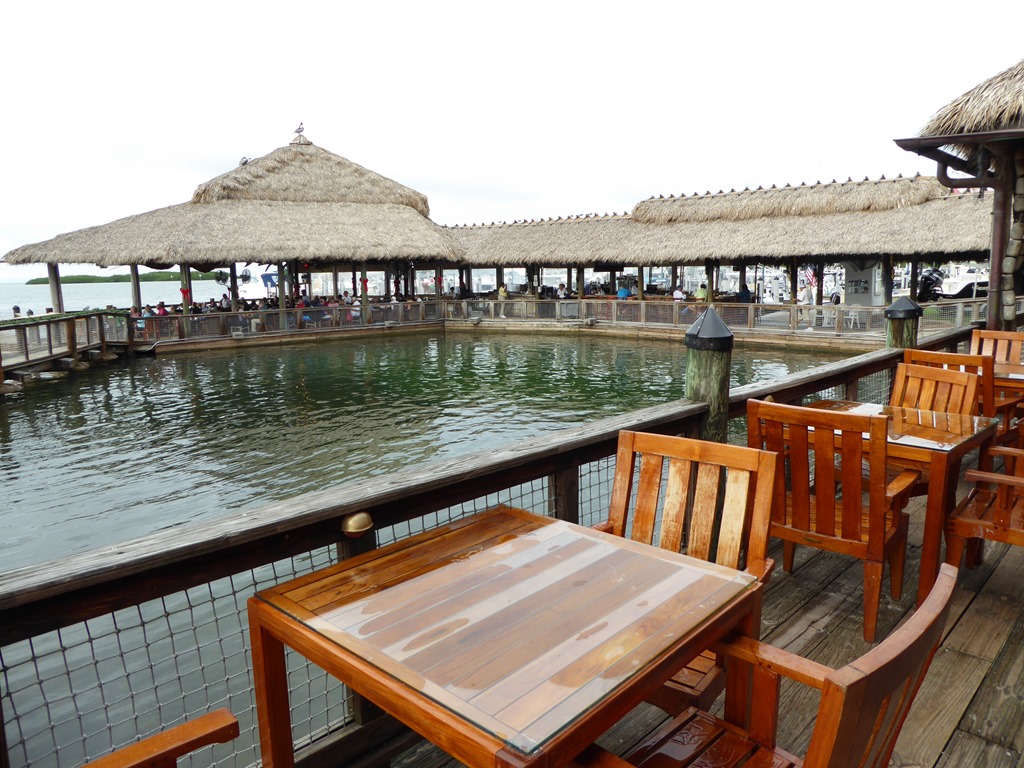 We seldom get down to the Florida keys, but when we do, we always enjoy it. The weather and the atmosphere always make this a great place to visit. The more painful part is the drive down from Miami. It took us almost 2 hours to drive the first 30 miles. But after that, the traffic started to lighten and became almost delightful. Delightful because the only car available when we picked up our reserved car was a Mustang convertible. Gee, such a hardship!

While it was raining in Miami, it became warmer and clearer the further we drove to the Keys. Of course we took advantage to put the top down and cruise.

Our traditional stop en route to Key West is lunch at Islamorada Fish Company. This company, located on the harbor, sells fresh fish and has an open-air, thatch-covered restaurant built on a dock, overlooking the water. The wrap-around deck also attracts more than its fair share of giant tarpon fish which the company feeds with bloodlines from freshly caught fish, and diners can feed with small shrimp bought from the store. Our lunch consisted of two very good dishes: grouper sandwich and giant, perfectly cooked fried oysters. The stone crab claws (the primary reason for our stop), were less sweet than those at Joe’s in Miami and the mayo/mustard sauce much less tasty. But it is still a good stop. 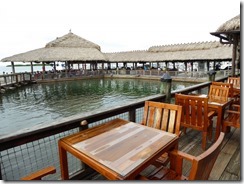 Key West: A Day in the Life of Party Central

Let’s face it. Key West is a party town. Although it is officially part of the United States, that’s just an accident of history. That of being part of Florida, an accident of politics. Key West is actually a country unto itself: Residents call it the Conch Republic. It has a character all its own with nice gingerbread houses, former government buildings such as Harry Truman’s Little White House (now a museum) and the U.S. Customs House. And then there’s Duval Street (think a mini Bourbon Street without the street drinking, but with lots of drinking in bars). 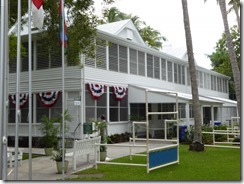 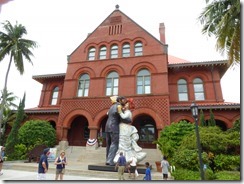 And since Key West is an island, it makes sense that it would operate on Island Time. But in Key West time, the visitor’s day begins at sunset.

We have written about life in the town’s Party Culture in previous posts. Rather than go back to basics, we’ll just provide highlights around our favorite traditions and most recent discoveries for each part of our Key West Days.

Here are some of our most recent updates: 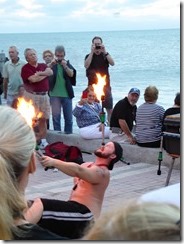 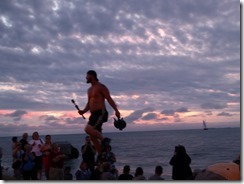 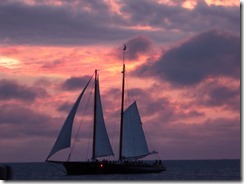 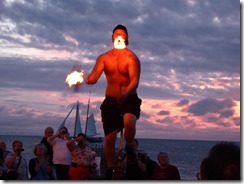 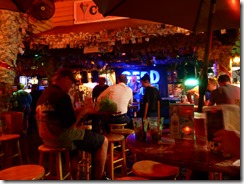 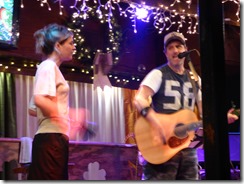 This post may give one the impression that drinking and partying are the only thing one does in Key West. Not quite true. The city has “industry” beyond alcohol. It, for example, has multiple micro-cigar factories and stores, a number of key lime shops and pie bakeries and its own pepper sauce company (even though peppers are not grown in the Keys). And, at least according to a sign on a building, is in the process of buildings its own rum distillery. This being said, however, the island’s largest industry (beyond bars, restaurants and hotels) is almost certainly T-shirts. Every other storefront offers them and many “make their own” by ironing any of multiple decals on a shirt of the buyer’s choice. 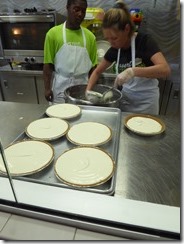 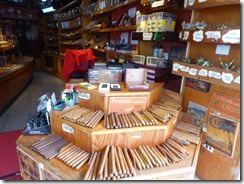 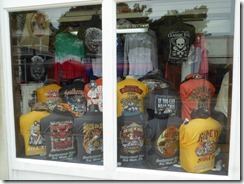 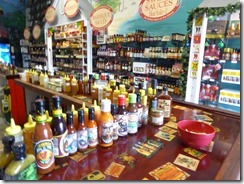 We missed the annual Christmas Parade of Boats by two days (December 12). But we were there for the annual Christmas Bike Parade that was so long as to suggest that every island resident, plus a number of tourists joined in on the fun. Bikes and/or riders were outfitted with reindeer antlers, Santa suits and hats, and some hauled bike trailers that served as mini-floats. And after the parade, participants boarded the Conch Train for a reprisal of their route.

Back in the old days, Key West’s economy was based largely on sponging—not as in begging tourists for money, but as in diving for and harvesting sea sponges and other items (such as Conch Shells) that did not require refrigeration.

By the mid-1700’s however, entrepreneurs discovered a new means of earning money from the sea—salvaging. By the early 19th century, more than 100 ships per day passed by the treacherous shoals. Given ships’ limited power options and navigation capabilities and the slow response to steering, any mistake or slow reaction (especially at night)—not to speak of an unanticipated storm or hurricane—could result in a ship going aground. The average was one ship per week. In 1920, 18 Spanish Galleons were lost in one storm alone. All these ships carried cargo and some, especially the Spanish Galleons, often carried huge quantities of gold and silver.

There was, therefore, money to be made from these wrecks. In some cases, big money. The SS Issac lberton, for example, foundered 1n 1856 with a cargo of Carrera Marble valued at $256,000 in 1856 dollars. The 1857 SS Central America went down with $2 million in gold (about $125 million in today’s dollars). Meanwhile, Galleons, such as the Atocha, which sank way back in 1682, carried even richer cargoes. True, not all ships carried gold, silver or marble. Many carried rather pedestrian cargoes, such as silk, spices and china from the Far East, or just shoes, dresses, clothes and so forth from U.S. ports.

But regardless of the cargo, there was big money in salvaging. By the 1820s, virtually every seaworthy schooner in the city was devoted to salvaging and those who didn’t actively salvage built and ran warehouses to store salvaged goods, ran auctions or bought salvaged goods in bulk and sold them at retail prices. Salvage ships rushed to any spot a wreck was thought to be or even stationed watchmen at strategic spots in anticipation of mishaps. Once a wreck was spotted, salvagers rushed to be the first to the site: The reason, the one who arrived first was named the Wreck Master. They could determine if they could handle the wreck alone or, if they needed help, who they would retain and how the proceeds would be divided. Once a wreck was being salvaged, warehouse operators and merchants rushed to be the first at the dock to meet the salvage ship at the dock in hope of scoring a storage contract or buying good on the cheap. Many, including Asa Tiff, after whose salvage warehouse the museum is modeled, built tall watchtowers so they could spot wrecking ships approaching port. Customers also got into the act, with weekly salvaged goods auctions becoming major social events.

The salvage business was large and lucrative. By mid-century, Key West had the highest per capita income in the country and more than two-thirds of Florida’s entire export income came from salvaging.

But was this type of pillaging even legal? Absolutely! First, the law of the sea specifically permits it. Second, governments encouraged it. Not only did salvaging bring money into government coffers, it also saved lives. Wreckers, after all, were often the first to discover and reach foundering ships and they were required to bring all crew members and passengers to safety before any salvage works were done. Key West had  a special Federal Salvage Court and staffed by a judge who literally wrote the book on maritime salvaged law. Wreckers were typically awarded between 25 percent and 50 percent of the value of the cargo, depending on the difficulty and danger of the recovery job.

Although the salvage industry gradually died out after the invention of the steamship and modern navigation equipment, there are still wrecks and still a need to salvage their cargos. True, the cargo ships and Spanish Galleons of yesterday have generally been replaced by yachts and supertankers. But as long as there’s a need, there will always be adventure seekers willing to do the job.

And what of all those gold- and silver-laden Galleons that went down without a trace? The real adventurers of the salvaging trade are still looking for, and occasionally finding them. The aforementioned SS South America, for example, was discovered and salvaged in 1987 and a large silver bar and pieces of eight from the ship are displayed at the museum. Meanwhile, the Atocha, the biggest, richest wreck of all was salvaged by adventurer and salvager Mel Fisher in 1985. Carrying more than 40 tons of gold and silver (not to speak of precious jewels, it yielded $450 million in both historical and monetary treasure. Some of these artifacts are on display at the Mel Fisher Museum, which is only about a block from the Shipwreck Treasures Museum. (We visited the amazing Fisher Museum on a previous visit, but did not return on this trip. 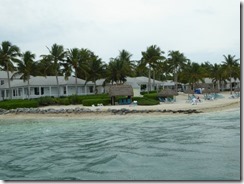 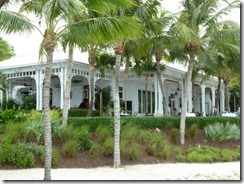 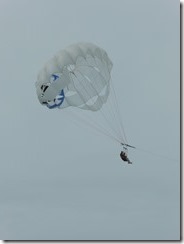 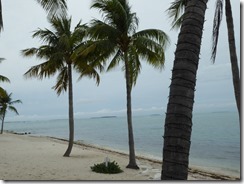 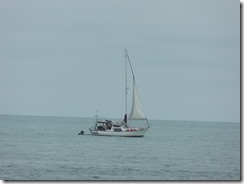 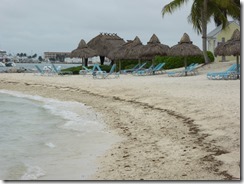 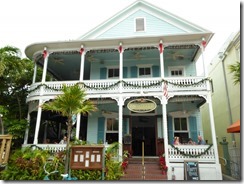