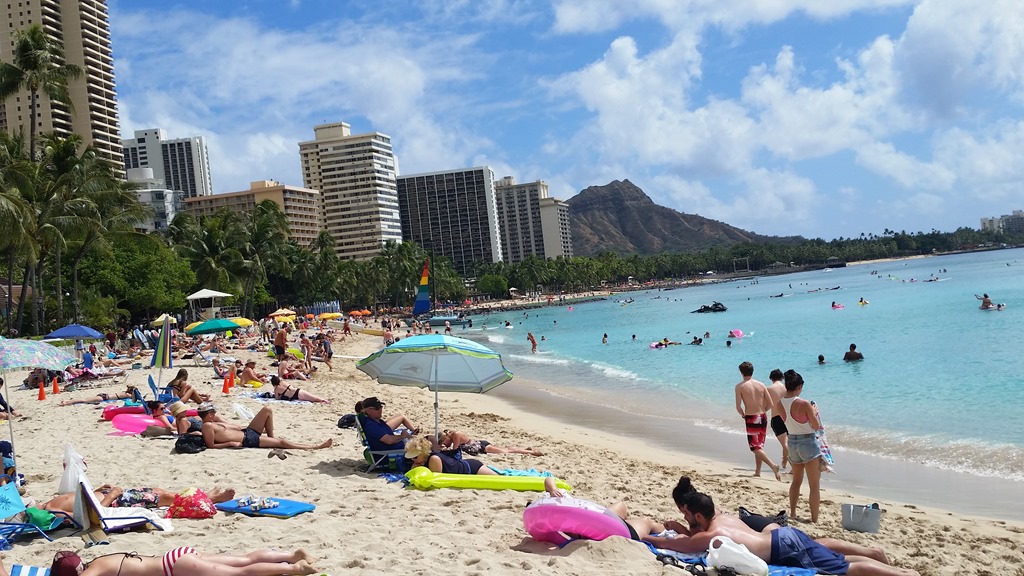 There is more to Honolulu than Pearl Harbor. In our short time on the island, we set out to explore as much as we could

A Day on Waikiki

After a day of actively learning about the art of war, we were ready for a day of peace and leisure. So, after a nice catch-up breakfast with a friend, we were ready to spend the day in in Waikiki, especially the luxury-store packed Kalakaua Street, and of course, along the beach. Since we are not ones to lie on the beach, and had planned other days snorkeling and playing in less crowded, less touristy Kaui’I and Maui waters, we contented ourselves with a few hours of staring at the majestic Diamondhead, dodging people on the beautiful the beach and wading the shoreline from the Aquarium to Ala Moana Harbor.

Along the way we stopped for a nice lunch and a couple of celebratory sunset drinks. But even Waikiki can’t escape the presence of the U.S. military. So rather than fight the Army, we decided to (at least metaphorically) join it by touring the US Army Museum of the Pacific which occupies one of the Army’s original coastal batteries.

US Army Museum of Hawaii

This Waikiki Beach Museum, which occupies the 1911-built Battery Randolph, traces the role of warfare and armies in the history of Hawaii, beginning with tribal warfare, Captain Cook’s introduction of guns onto the islands, the role of King Kamehameha in defeating smaller tribes and unifying the islands and the army created by the monarchy. Its primary focus, however, is on the U.S. Army’s role in Hawaii and on the contributions that Hawaiian soldiers played in various U.S. Army conflicts. The U.S. Army’s involvement began in 1898, with the first army camp built on Oahu and expanded with the creation of additional forts, a coastal defense system and complementary mobile defense force, the development of the Army’s Hawaiian aviation force in the 1910s and 20s and the introduction of radar. Nor would any mention of the Army’s involvement in Hawaii be complete without a mention of the way it placed the entire island chain under military rule for three years after the invasion or the fingerprinting and in many cases, detention of residents of Japanese ancestry.

The discussion of the roles that Hawaiians played in American wars began with the Spanish American War and WWI, and, of course, expanded greatly in World War II, with the invasion of Pearl Harbor. It emphasized the valorous service of so many Hawaiian soldiers of Japanese extraction in the war despite the fact that the country for which they were fighting had detained many of their families and specifically discussed their enrollment and training in the Military Intelligence Language Program which enabled some of these same soldiers to infiltrate and gain valuable intelligence from Japanese civilians an d soldiers. The museum also examined the role of Hawaiians in subsequent wars, such as Korea, Vietnam and the Arab Gulf Wars and especially the critical contributions of Japanese Hawaiian soldiers such as Senator Daniel Inoye and General Eric Shinseki. Additional displays discussed the role that the Army Corps of Engineers played in Hawaii’s development (and Hawaiian’s role in the Corps) and particularly distinguished Hawaiian medal winners.

But enough of war and soldiers. Let’s talk food and lodging

MW. We were introduced to this elevated “Hawaiian Comfort Food” restaurant by friends who joined us for dinner. We began with two delicious shared appetizers: Ahi Poke with ikura, Uni and rice crackers; and pressed chicken with soy sauce. Entrees consisted of seafood gumbo (with scallops, Kauii shrimp, clams and Andouille sausage), mochi-crusted opakapaka with somen noodles and soy vinaigrette; braised shortribs with foie gras and truffle mashed potatoes; and beef tenderloin stew with oxtail roulade and beef stew risotto. We particularly enjoyed our two seafood dishes. And since we did so well with our appetizers and entrees, we had to try the desserts from a James Beard-winning pastry chef: MW Candy Bar (macadamia nut praline with salt caramel, Waialua chocolate and cookies) and tropical fruit creamsicle brulee (with lilikoi sorbet, tapioca pearls, tropical fruit, likikoi custard and guava chiffon), of which we particularly enjoyed the candy bar.

Alan Wong’s. Although we had been here twice before, this visit was like a tale of two restaurants: highly accomplished food combined with some of the most amateurish service we have ever experienced. As for the food, we shared three dishes, all of which were very good: “Da Bag”, consisting of littleneck clams, Kailua pig and shitake mushrooms steamed in broth in an aluminum foil bag; baked ginger-crusted onaga with miso vinaigrette, hamakua mushrooms and corn; and steamed shellfish bowl of lobster, shrimp, clams and mussels in a Bouillabaisse-style broth. As for the service, when was the last time when a bread server told you he forgot the type of bread he was serving (it was focaccia)? How about when you asked about a bottle of wine and the server responded that the sommelier was off and there was no one else who could tell you about it—suggesting as an alternative, that you Google the wine? Seriously? Telling us to Google the wine to see if we want to order it? On the positive side, the server, who admitted he was new, was very nice. Nice, yes, but we would have expected something more from such a renowned and popular restaurant.

Chef Mavro. While Alan Wong combined very good food with mediocre service, Chef Mavro combined excellent service with mediocre food—at nosebleed prices. Our experience began when the prix-fixe four-course menu contained not a single item that appealed to us, and we were effectively forced to select the six-course option, which neither of us were able to finish. We, however, accepted this and even substituted an optional dish—Perigord truffle risotto with a very generous portion of black truffle shaved at our table. (Good, but paling relative to the last such dish we had at Paris’ Maison de la Truffe). Additional good, but non-memorable dishes included foie gras parfait and a dessert plate of mixed chocolates. This being said there were two dishes we greatly enjoyed: roasted Krohole lobster with kobocha and brussel sprouts; and lamb loin with cranberry, sunchoke and toasted sunflower seeds and olive crumbs in lamb jus—offset by two dishes that we did not at all enjoy (goat cheese tarte and chioloate plate chocolate. Overall, not a bad meal, but not at all memorable—which you would expect at the price. Too make matters worse, wines are available only via pairings or by the glass—not by the bottle. That made the wine so much more expensive than it should be. We had been here before and really enjoyed it. This time? An okay meal, combined with okay wines for (with tip). The price? Just under $600. Not what we IT industry veterans would consider to be good “price-performance”.  Definitely this will no longer be a destination for us. The worse part is that some people that we recommended the restaurant to on our plane to Honolulu ended up showing up the same night we were there. We only hope they had a different experience than we did and don’t blame us.

Tiki’s. Although not in the same league as our dinner restaurants, Tiki’s, on Waikiki Beach, proved to be a quite a good lunch stop. We had three dishes: fried beef tenderloin Gyoza dumplings with grilled onions, miso chili aioli and Kahagaki sauce; Ahi Poke with seaweed, soy sauce and sesame oil on local arugula; and best of all, bacon and lemongrass crusted ono medallions with Molokai purple potatoes, chili sauce and baby bok choy. Nor did it hurt that we were there during Happy Hour, with $5 margaritas.

Although restaurants are critical to any of our trips, we do not live by food alone: We also need alcohol. We discovered three especially interesting bar stops:

We rented a private condo  through VBRO. It was an absolutely gorgeously renovated 1 bedroom condo in the Ilikai Hotel and Suites (which as we learned from a friend, was featured on the opening scene of Hawaii Five-0). All new furnishings, comfortable bedding, great kitchen area with anything you could want, and wonderful view that you could see from the balcony or from within the unit. Our hosts met us upon arrival and were amazingly helpful and friendly. So much better than a hotel. We really enjoyed our stay. And, within an hour or so after we left, our security deposit was back in our account. 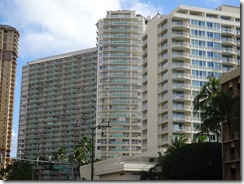