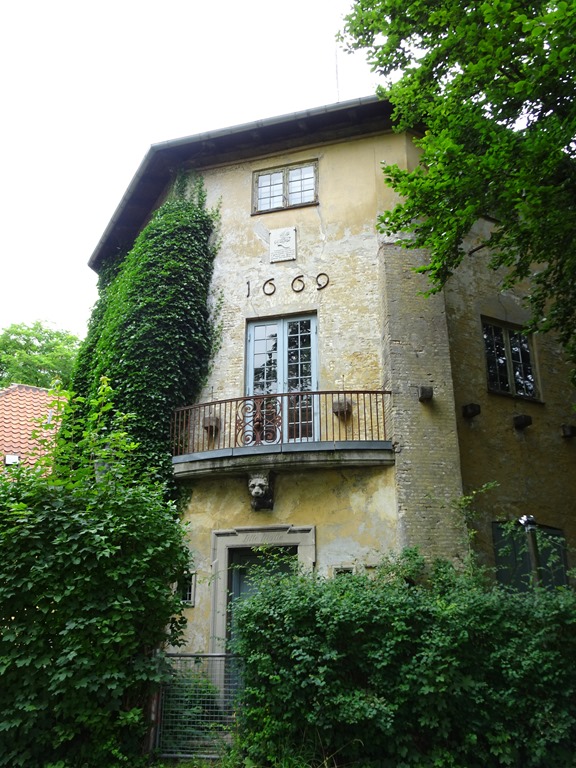 Copenhagen is a vibrant city. But one needs to explore the area beyond Copenhagen’s city center too.  Among this area’s highlights are:

Christianshavn (Christiantown), an island just south the Latin Quarter, has not suffered as many fires as its northern neighbor. It, therefore, has a larger number of older buildings and retains more of its traditional character. The island, which was reclaimed from the sea, was built into a fortification, some of whose redoubts still remain along its southern shore. The area also drew a number of early Dutch settlers and was heavily influenced by and retains much of the Dutch influence that was reflected in the neighborhood’s mid-17th century nickname of Little Amsterdam. It even retains the bases of some of the island’s original windmills. 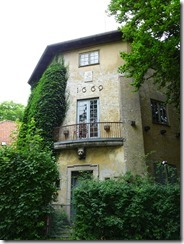 Later development was spurred by fires in northern sections of the city which not only drew more people but also more concern for fire prevention. Streets and intersections were built to be wide enough to accommodate fire engines and building codes outlawed the use of exposed wood on building exteriors. This, however, was after the construction of a number of half-timber, Dutch-style warehouses with peaked rooflines and beams from which to haul loads up from the street. 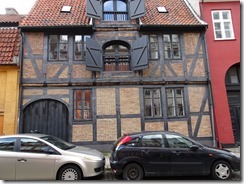 Although much of this character remains, a number of buildings are also showing their age and the hazards of being built on reclaimed land. Some of their pylons have sunk into the unstable soil resulting in sagging structures and uneven walls. 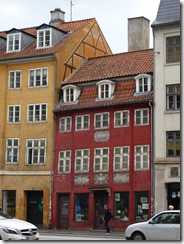 The area’s stone-based buildings, especially its two largest churches, have fared better. These include the 1759 Christian’s Church and its burial crypts (at which the Dalai Lama once spoke), and the spiral-spired Baroque Church of our Savior that is dated from 1695 (which was immortalized by Jules Verne in Journey to the Center of the Earth). 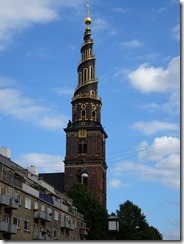 The area’s fortunes had sagged along with its walls and low-prices attracted artists and other trendsetters in the 1950s and ‘60s. The area has since attracted a number of well-to-do residents and the cafes and boutiques that tend to follow. A number of these residents now spend parts of their incomes and time along the town’s canals whose waters are not lined with pleasure craft and whose banks are regularly lined with grills and parties.

The 1950s and 60s also drew another type of resident that had decidedly different lifestyle goals. The hippie community that took over an old Army Barracks and created the Free State of Christiana.

Christiana is a unique neighborhood within Christiantown that merits its own mention, if not an entire blog post. Copenhagen’s original 1970’s hippie center used to be characterized by dirt roads, workshops, makeshift houses and an open use and selling of drugs. While the government tried to shut the community down, it continues, but with more strict rules on illegal activities. The alternative community is now a green, relatively autonomous commune that is housed in a renovated military barrack that is now very unmilitary-like with wildly painted buildings, anti-establishment graffiti, organic markets and an alternative kindergarten for its residents’ children. It currently has about 850 inhabitants (not to speak of thousands of visitors), some of whom are grandchildren and even great-grandchildren of original settlers. The neighborhood also has a number of cafes, music clubs, an offbeat, counter-cultural atmosphere and dozens of spots to congregate and just enjoy a vibe that is even more mellow than the rest of this very mellow city.

This ultra-mellowness is due to largely to one unique, Chrisiana street, unofficially named “Pusher Street” for a formally illegal activity to which, after many unsuccessful efforts to shut it down, the city and police tend to turn a semi-blind eye—the active and very open sale and use of marijuana, hashish and related paraphernalia. Those in the market can buy and smoke virtually any of this—although not hard drugs, which the community and the city absolutely bans (along with weapons, violence and private cars)—anywhere in the commune. Although nobody actively bothers this open trade, sellers do take care. Photography is strictly forbidden on this one street and most sellers where masks, so as not to broadcast their identity.

But while sellers are modestly discrete, consumers just don’t seem to care who sees or can identify them. Virtually everybody is smoking. Whether they are walking down the street, sitting at a café, playing chess or backgammon, listening to music, or just hanging out. Their joints in their hands, casually puffing, just like it was a regular cigarette.

Although almost all are mellow, one of the dope tents we passed seemed to be the source of periodic loud pops and flashes of flame. When we looked in and asked what was happening, the vendor explained his own particular form of entertainment—throwing lighters into the fire and waiting for them to explode in a flash of flames. When we asked about the obvious risk of fire, the owner brushed it off by explaining than he had been doing it for years with no mishaps. Well, just about anything seems to go in Christiana, as long as you don’t break any of the community rules and you don’t hurt anybody. 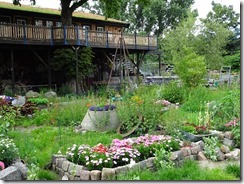 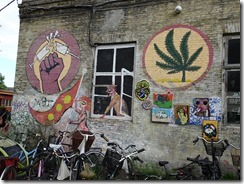 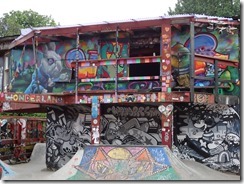 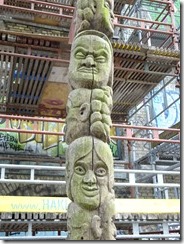 Frederiksstaden, an affluent, 18th-century suburb that has since been incorporated into the city. It has a number of stately homes (many of which have since been converted into multi-family dwellings, museums or embassies), a popular shopping district and tall domes of both the Russian Orthodox Church and the Marble Church (which, while taking 150 years to build, is actually constructed of limestone rather than the much more expensive intended marble). It is also home to Amalienborg Palace, the winter residence of the royal family. Build in 1760, the place consists of four buildings (on the Queen and her husband, one of the Crown Prince and his family, one for state quests and one than now serves as a museum. And since the Queen is sometime in residence, the palace also has a daily Changing of the Guard ceremony (which is mercifully short here than that at the Swedish Palace). 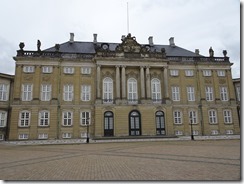 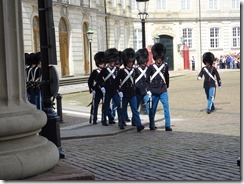 Amaliehaven, which is home to Edvard Eriksen’s Little Mermaid sculpture (popular with tourists, but disdained by most locals). But whether or not you like the statue, everybody likes the lovely, partially elevated park that leads to Toldboden, a very casual, inexpensive seafood (mostly fried) café with beer, wine and lots of outdoor seating, 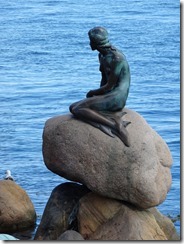 Holmen, another of the city’ many islands, is home to the huge, modern and expensive (over $500 million) structure that was completed in 2000. Sited directly across from Frederiksstaden’s Marble Church, and with a clear view through the Amalienborg Palace Plaza, it has also been subject to considerable controversy, especially surrounding the control that the donating family (a co-founding family of the Maersk shipping empire) exercised over the design details and especially in how they managed to fund the “donation” largely out of tax breaks. It is, nonetheless, an impressive structure, at least from the distance across the water at which we saw it.