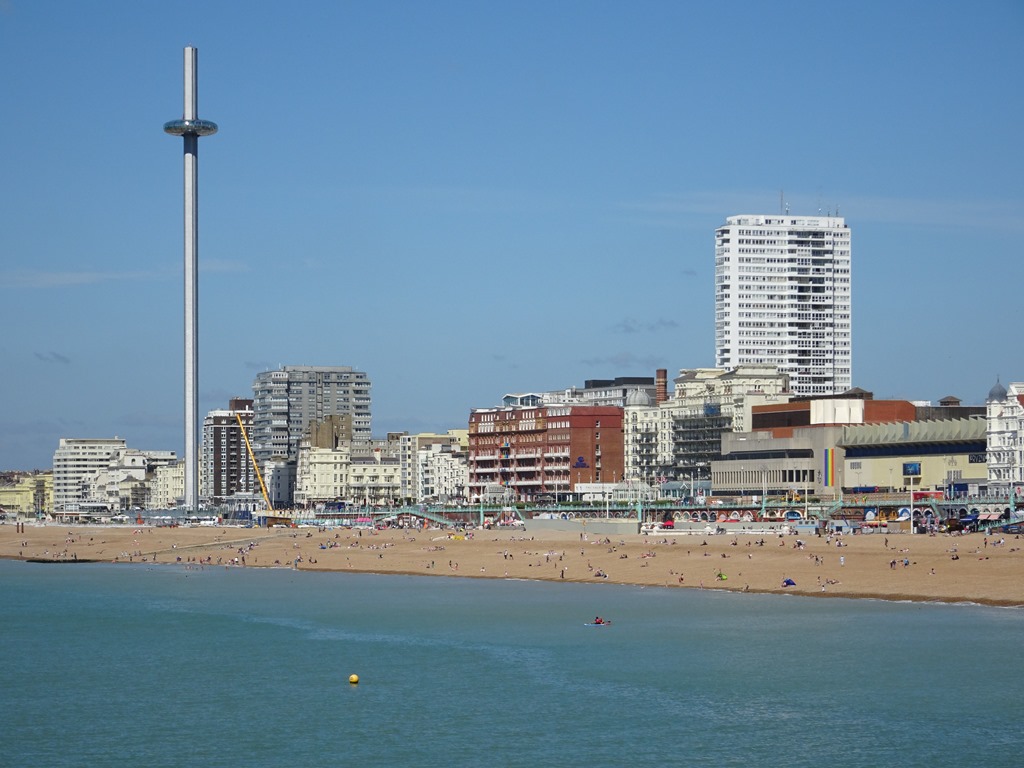 For all our times in England, we have never gotten down to the southernmost part of the country along the English Channel. So this trip, we decided to postpone our London visit by a few days to explore the coast and the surrounding inland area known as The Downs.

We began our exploration in Brighton, one of country’s and the world’s first beach resort, complete with an amusement pier. Our objective was not to lay on the beach or ride roller coasters. We were on a journey of exploration: to briefly explore the city and then to use Brighton as a base for briefly exploring neighboring towns, to familiarize ourselves with the region’s attractions and to determine if we want to return for a more focused and extended visit to one or more of the areas we discovered this trip.

Although Brighton is certainly a beach resort, it has never been your run-of-the-mill, pack-up-the-family for a cheap weekend type of resort. It has generally attracted a more refined and discerning clientele that has included Princes and Kings, their wives and sometimes, their mistresses. In fact, the town’s primary attraction is a pavilion built by the Prince of Wales (who became King George IV) to host lavish society parties.

Although no longer the resort of kings, Brighton is still a beach town. The Beach is a long strand of stony beach (in contrast to the sandy beaches of America’s Atlantic Coast) that is broken up by beachside cafes, concessions and children’s areas. And for those who prefer to experiences from a distance, there’s British Airway’s 1360, a circular viewing platform that meets its customers on the ground and carries then up a several hundred-foot pole for a birds-eye view of the beach, the channel and the city. 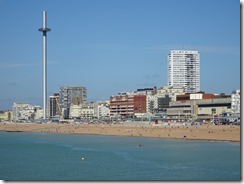 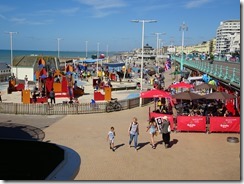 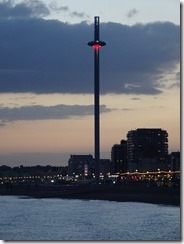 The highlight of the beach is Brighton Pier. This several hundred meter, Victorian-era (1899) amusement pier is packed with arcades, fast-food and casual restaurants and at the end, a number of amusement park rides. It is, as would be expected, more atmospheric, more lively and more fun under the evening lights than it is in the day. 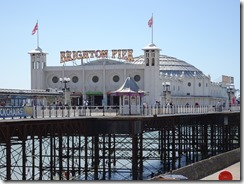 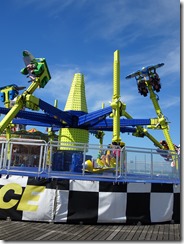 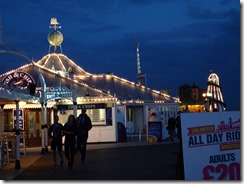 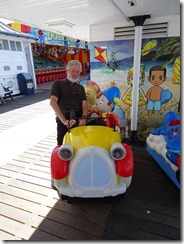 Our favorite parts of the city, however, are off the water.

The Prince of Wales (who later became King George IV in 1820) commissioned this park and seaside pleasure palace to his specifications. Architect John Nash designed and completed it in 1823. As interior photos were not allowed, you have to visit this amazing complex to fully appreciate it.

The palace was tuned to the bachelor lifestyle of the playboy/gourmand/glutton/party-animal prince. The lavish palace was designed as a conglomeration of Mughal and Indian architectural styles–a fantasy of onion domes, turrets, minarets. The interior, by contrast, is primarily Chinese, or at least the 18th/19th century European vision of Chinese, with oriental paintings, vases and furniture surrounded everywhere by painted, carved plaster and molded bronze dragons. The prince went so far as having mahogany stairway railings carved in the shape of and painted to look like bamboo.

The most fascinating thing about the palace, however, is the size and elaborate décor of two, huge, domed rooms: The Banqueting Room and the Music Room. And speaking of giant (albeit less lavish) rooms, its huge kitchen could accommodate dozens of chefs and cooks to prepared elaborate, French-inspired meals that could consist of up to 100 different dishes piled on the huge dining table. But as inspired as was the cuisine, the Prince was particularly demanding as to how the food was presented—every dish had to be a work of art.

Most of the remainder of the palace is more subdued. The galleries, the upstairs’ princes’ bedrooms (for when George’s two younger brothers visited) and especially the restrained bedroom of Queen Victoria (who was the second monarch after George IV) and found the “bachelor pad” palace to be ill-suited to her and Albert’s preferred, quite family life. She ended up selling the Pavilion to the city and building another, more family-oriented seaside resort (Osborne House) on the nearby, but much more remote Isle of Wight.

After the sale, the building went through many different uses, including, most interestingly, as a hospital fir Indian soldiers during WWI. It has since been renovated and now operates a must-see museum.

The Royal Pavilion, however, consists of much more than just the palace. It’s surrounded by a beautiful garden that consists partially of a very popular open lawn, and a lovely, free-form flower garden. It also has another buildings—the Brighton Dome, which is currently the city art museum, used to house the Prince/King’s horses in almost luxury as their owner. 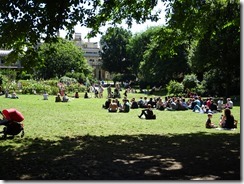 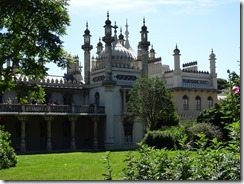 The Lanes is another must-see Brighton destination. This warren of small pedestrian streets and alleys used to house fisherman. It now houses a combination of renovated and new buildings that house hundreds of restaurants and boutiques in a charming and perpetually crowded neighborhood. 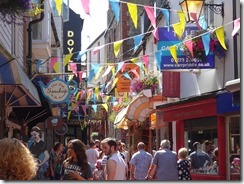 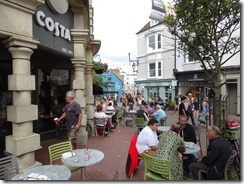 The Brighton restaurant scene consists primarily of casual, family restaurants: a healthy mix of Chinese, Italian, Indian and other ethnic restaurants, burger and pizza joints, plus dozens of places that offer large selections of very fresh, simply prepared seafood. And of course dozens of fish and chip shops.

Often in the mood for seafood, we ate at two fish houses and one of the closest thing that the very casual city has to a fine dining restaurant:

We stayed at the Hotel Una on Regency Square. The location was perfect…a short block to the beach and walkable to other sites we wanted to explore.  Each room seemed to be unique in layout and in furnishings. As we ended up changing our arrival date, we were in a room our first night that had steps leading to the bathroom. We were happier in our second room with no steps to trip on when visiting the bathroom in the middle of the night. The rooms were nicely furnished and had some interesting features and sitting areas. Staff was excellent and very accommodating. Breakfast consisted of a choice of hot items, as well as fruit, juice, cereal etc. All in all, a nice place to stay.