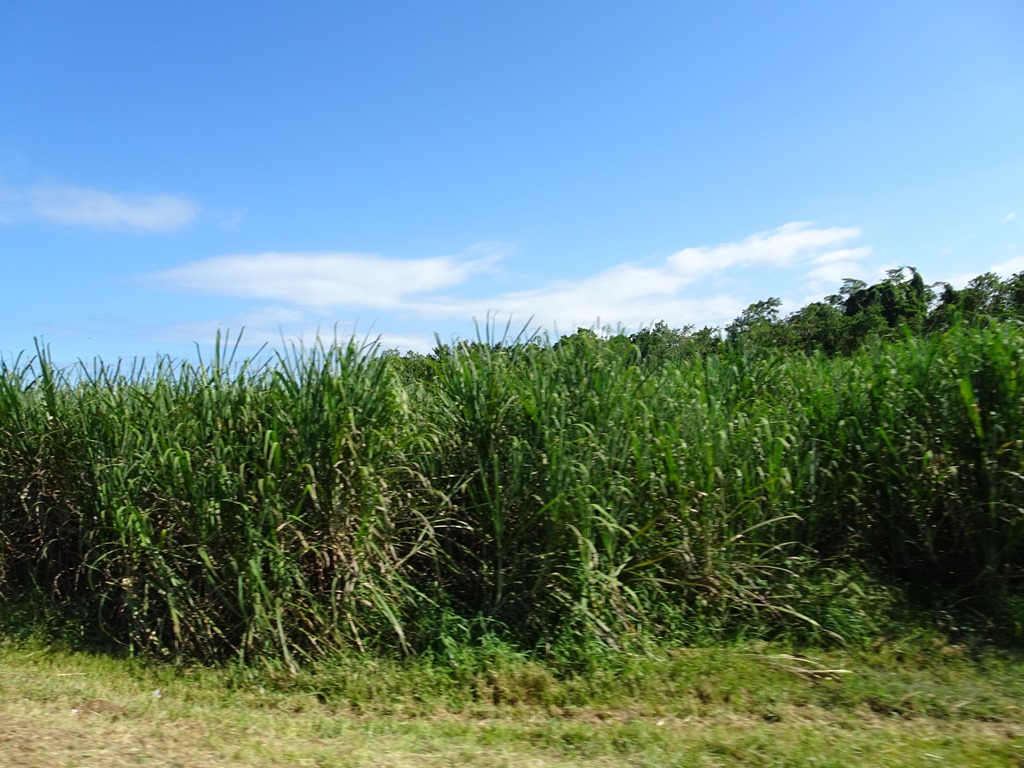 Continuing our adventures around the Great Barrier Reef region, we used Port Douglas as a jumping off point to explore one of the Australia world heritage rainforest areas. We drove north along the occasionally lovely Captain Cook Highway through Mossman, Daintree and Cape Tribulation (Cape Trib). The drive takes you up and down scenic mountain ranges, through agricultural (especially sugar cane) valleys, and along pretty palm-lined, white sand beaches that provide great views of the fog-shrouded mountains. 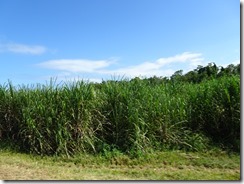 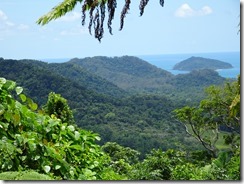 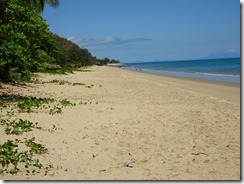 Although the drive is lovely in itself, we went primarily to walk through the Wet Tropics World Heritage Rainforest. The world’s oldest tropical rainforest, which is more than 100 million years old, is a veritable Petri dish of unusual species. It contains the greatest diversity of endemic species of plants and animals in the world with 40 percent of the continent’s plants, one-fifth of its bird species, a quarter of its reptiles and a third of its amphibians and its marsupials.

Parts of the forest are also home to many of the world’s largest and most venomous snakes, largest (up to 23-feet 2,200 pounds) and hungriest crocodiles, largest, most dangerous, endangered birds (the six-foot, razor-clawed cassowary, of which there are only 1,200 left in the wild) and largest (up to six-inch) bird-eating spiders. We didn’t see any of these however. The park, parts of which abuts another World Heritage Site (the Great Barrier Reef), consists of a large tropical rainforest that flows directly into a mangrove forest—two very different ecosystems in a single park.

We explored the rainforest portion via roughly 5 km of trails through Mossman Gorge in the southernmost section of the park, which is dissected by the Mossman River. The rainforest is, as would be expected, a densely packed mass of trees (including giant Kauri pines), a wide range of palms and ferns, and all entangled in vines—some of which have already strangled, killed and grown above the original host tree.

Since the rainforest soil has such a high water content, it provides little support and little oxygen. The trees have responded by growing “buttress roots” that spread out from the base, both above and below the surface. These provide both additional support and an additional source of oxygen. Some of the roots that we saw ran from about 10 feet above the ground and were suspended in air for perhaps 20 feet before burrowing into the soil. Many trees sported all types of epiphytes and some hosted basket ferns so large that their weight bent the trees. Although it is supposedly home to many species of birds and marsupials, we saw little evidence of fauna, other than for a few beautifully colored butterflies.

We then walked the short, but lovely 1 km Jindalba boardwalk trail further north in the park, closer to the shore of the Coral Sea, where the rainforest met a mangrove swamp/forest from which most of the Queensland coast (including the city of Cairns) was formed. The rainforest portion of the trail provided some great examples of the way vines strangle trees. One large tree was in the process of being strangled by a 3-inch diameter vine that was winding itself all the way up the trunk. Another was a fascinating tangle of vines that had once surrounded a tree that has since not only died, but has entirely decomposed, leaving an open lattice of vines. 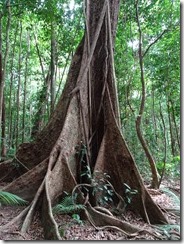 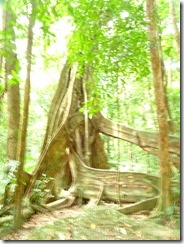 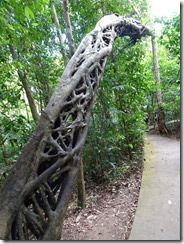 The trail then leads through a thicket of cycads (an ancient fern) into a mangrove forest, with its multiple species of trees and their tangle of prop, aerial and knee roots—all evolved specifically to provide support, to trap nutrients and to provide oxygen to the trees, and with leaves that excrete the salt absorbed from the salt and brackish water in which they live. Slightly further inland, meanwhile, larger hardwood trees, like Yellow Pendas, rely on large buttress roots to provide stability and oxygen in the muddy, waterlogged soil. 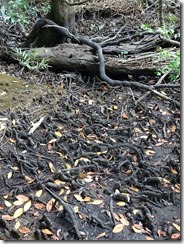 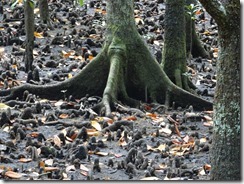 A smaller boardwalk trail, at one of the Daintree resorts, ran through the midst of a forest filled with fan palms—with long, relatively narrow fronds that radiated from the center to form a circle. While these fans (which grow to up to 6 feet in diameter) are lovely in and off themselves. They are even prettier when you look up into the sunlight through the trees’ (which reach up 60 feet) multiple, overlapping fans. These create an appearance almost reminiscent of a ceiling of Dale Chihuily blown-glass plates. 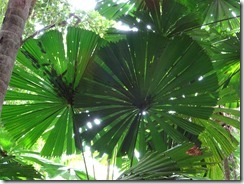 The long day required some sustenance along the way. This came from two stops: