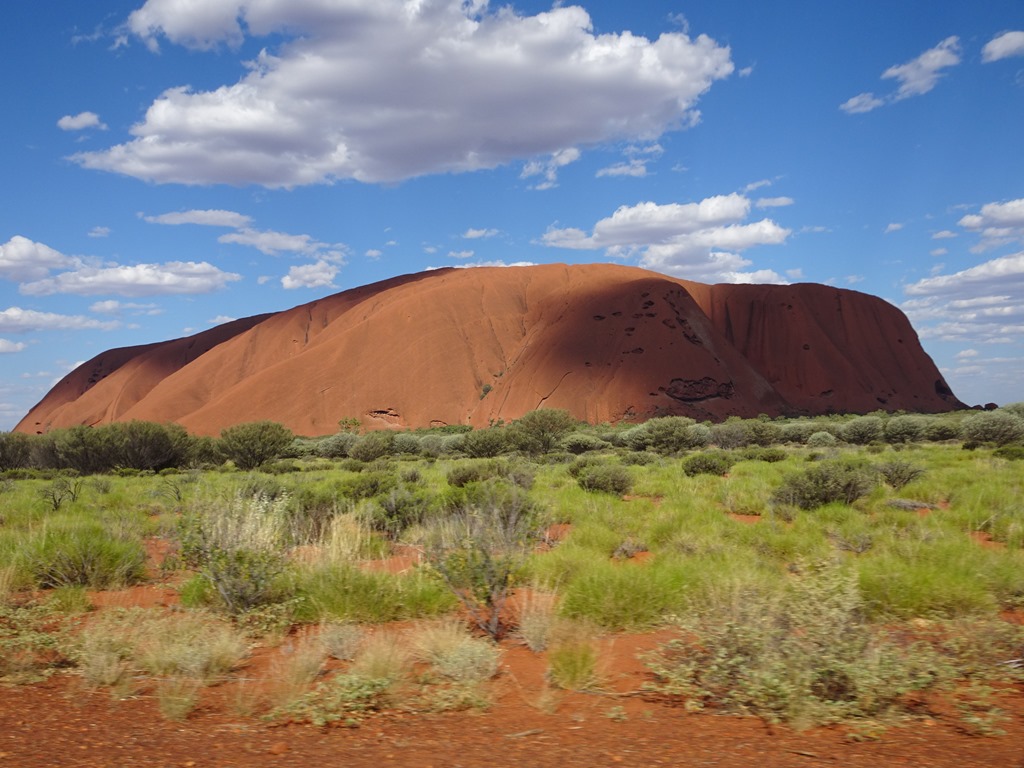 Although we are spending the vast majority of our two months in Australia within about 50 miles of the coast (primarily northeast and southeast), we made one venture into the nation’s vast hinterland. In our case, into Australia’s Northern Territory, an area that covers almost one-third of the continent (more than half a million square miles). Although this state contains many of the nation’s kangaroos, it contains less than 1 percent of its human population.

Although we put over 1,000 kilometers on our car, we only made 4 stops in this vast state:

Our next several blogs will talk about each of these sites.

Ayers Rock, or Uluru, is a World Heritage site known both for its natural and its cultural importance and is the largest monolith in the world. The immense red sandstone rock, which measures 5.8 miles in circumference and rises more than 1,100 feet from the dessert floor. It is like an iceberg in that two-thirds of its volume is underground. For the aborigines, however, it is much more than a majestic rock. It is the their most important spiritual site—a physical and spiritual meeting place that just happens to contain one of the area’s few large permanent water hole (Mutitjulu) that provided not only the most reliable source of water in the parched desert, but also a source of shelter and game for weary travelers. 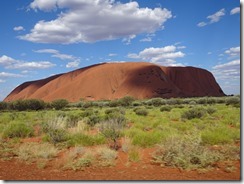 We are always tempted to climb any mountain we see, and Uluru is no exception. It even has a well-marked, cable-assisted trail (similar to and, almost as steep as the final leg of Yosemite’s Half Dome) that is available for climbing. We, however, had no intention of doing so. First, it is a revered religious site that, while technically open to climbing, is strongly discouraged. The Cultural Center in the park in fact, has a “no-climb” pledge that visitors are encouraged to sign. Second are the more practical reasons, it is dangerous (several people have been killed). Moreover, even in the best of circumstances, and the day we visited, with temperatures above 110 degrees, was hardly the best of days. In fact, the trail was officially closed due to the baking heat. 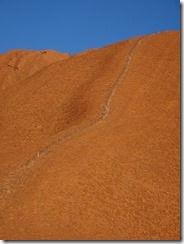 This being said, we did view the monolith by day from all different angles. We began with a visit to the Cultural Center which explains the concept of “Tjukurpa”, the foundation of the aboriginal Anango people’s entire way of life—including their culture and their relations with each other, other peoples, with animals and plants, and with the land. The center portrays the peoples’ lives and culture and provides a history of their initially welcoming and increasingly difficult relations with whites (especially after the whites began cattle ranching), how they lost their land and eventually recovered it (with certain conditions) in a pioneering agreement with the government.

The rock itself is, as would be expected, awe-inspiring: Its very size, the apparently symmetrical, elliptical shape and smooth texture from a distance, which, as you get close, reveals fascinating erosion patterns and large sections of rock that have broken from the surface and crashed to the ground (providing caves in which ancient travelers could shelter). And the especially pretty area around the Mutitjulu water hole. 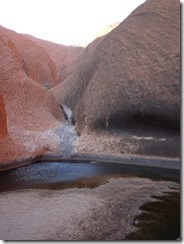 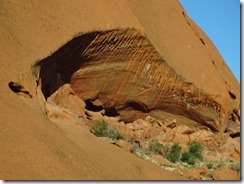 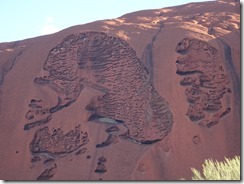 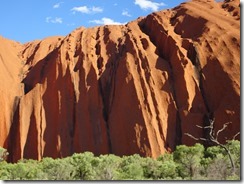 The most interesting view—at least from the pictures–however, is in the evening, when the setting sun casts the red rock in a surrealistic glow. Although the clouds of the early evening portended a great sunset, they had disappeared by the time the sun actually set on the day we were there. Rather than turning brilliant shades of pink, orange, red and mauve, the rock just gradually darkened. 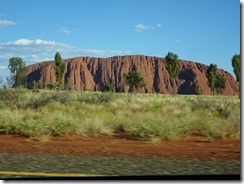 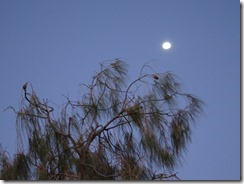 Our sunset view, however, wasn’t wasted. Our view, from the top of a restricted-access dune was accompanied by unlimited Australian sparkling wine, canapés (shrimp, crocodile, beetroot-infused goat cheese, etc.) and, when it got dark, an overview and walk through a huge light installation (virtually in the shadow of the rock) that was created by British artist Bruce Monro. His Field of Lights installation consists of a large field, planted with clear plastic stems, topped with 50,000 hand-blown, frosted glass bulbs that are connected by 38,000 kilometers of fiber optic power that transmit light generated by thousands of projectors, each of which projects different colors of light and different intervals. The projectors themselves are powered by batteries that store energy generated by solar panels. 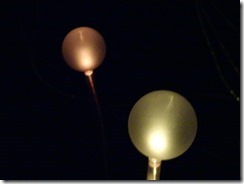 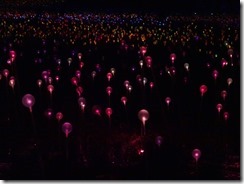 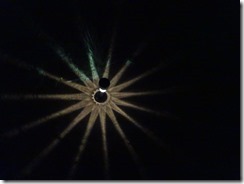 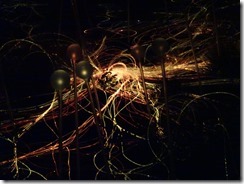 The huge installation, which cost about $1 million to construct, remain in its current place for a year (April 2016 to April 2017). It will then be deconstructed, returned to England and selectively reused as other installations are created and funded. Although an immense and interesting project, the effect of the light projected from the bulbs across the large field was not as inspiring (at least to us) as it promised to be. This being said, when you get right down into the field, you experience other types of light—the star patterns of the walkway’s guide lights and especially, the light emitted from the incredible tangle of 38,000 km of optical fiber. This itself (not to speak of the sparkling wine and the canapés) was almost worth the $75 admission price (for a package about in the middle of the many offered viewing options). We wouldn’t rush back or tell others to go.

Kata Tjuta, Walpa Gorge and Valley of the Winds

Although Uluru gets all the press, the other sites of the park are at least as beautiful and as interesting. Kata Tjuta is an impressive field consisting of 36 large rock domes that were deposited tens of millions of years ago as part of a huge alluvial fan created by retreating glaciers of the last Ice Age. Although it is smaller and lesser known than Ayers Rock, in some ways it is more beautiful rock in the same National Park. The formation would be considered huge, were it not for their proximity to Uluru or Ayers Rock.

The viewing area, which is closest to the rock and most visited, offers a panoramic view of about a dozen of the rocks. 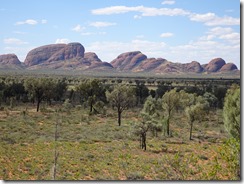 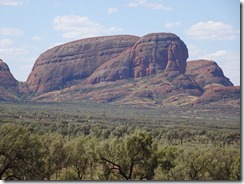 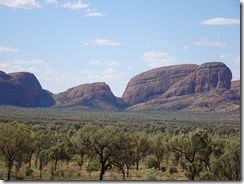 The interpretive walkway to the viewing platform (which is mercifully covered to protect one from the fierce sun we experienced) provided a good overview of the geology, the flora and the fauna of the area and how they are all interconnected. Just as beautiful as the rock formation, however, was the landscape. Iron-oxide-tinged sand covered wide expanses of the land. Plants—especially spinifex grass (the hardiest of all grasses) which is one of the few that survives in this brutal environment—stabilize the dunes and shelter the many species of insects and retiles that live here. Although the grassy dunes are littered with many hearty bushes, the landscape is pocked by occasional trees, especially Kurkara pines, the largest of the trees and one of the few whose roots can drill deep enough into the soil to reach groundwater and thereby, spare themselves from reliance on sparse and occasional rainfall. (Sparse except during monsoon season when the land and the roads are often so flooded as to be impassable.) 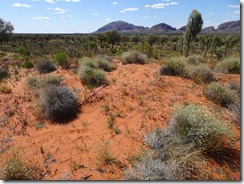 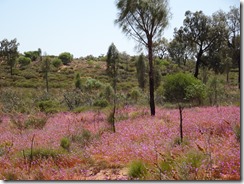 Speaking of rainfall, a recent small rain prompted the blooming of a few patches of pretty purple and yellow wildflowers, which significantly brightened the landscape of red sand, pale green and yellow grasses and bushes and bare wood of dead or dying trees. 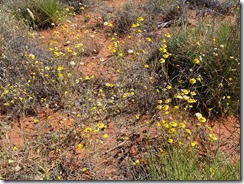 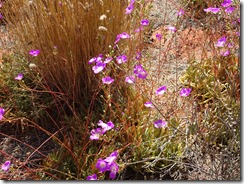 Two other stops that are several kilometers down the road, away from Ulara provide even better views of Kata Tjuta and the opportunity to explore the domes in more detail. The Walpu Gorge and Valley of the Winds stops let one view a few of the larger of the rocks and to hike around them. Although we got close, we were not prepared to take advantage of the opportunity to venture into the canyon. Since we arrived in the middle of a very hot day, and had no advanced information on the trail, we had neither the clothes to protect us from the fierce sun, the water to keep us hydrated in the heat nor the time to capitalize on the wonderful opportunity. Something that turned out to be very unfortunate. 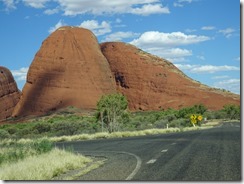 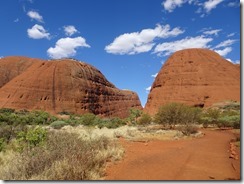 Yulara, a resort community (quite a nice one in our limited experience), is the closest thing to a town in the region of the park.  We ate dinner (after more than an hour of canapés and sparkling wine at the Field of Light). Our choice among the restaurant options was:

Arnguli Grill, where we had two dishes and, of course, a bottle of wine. We enjoyed the smoked Tasmanian salmon with Spanish onion, micro-herbs and extra virgin olive oil; and a huge, eight-bone rack of lamb with mustard sauce, corn-flaked crusted white corn grits (not our concept of grits), sun-dried tomato, green beans and bok choy. Our wine was a bottle of Barossa Valley merlot, a nice 2014 Thorn-Clark Sandpiper merlot.

We stayed at Emu Walk Apartments. Picture a hot, humid, dry, harsh but beautiful landscape. Then in the middle of this is a comfortable oasis…the Emu Walk Apartments. Quite expensive, a little out of character, but very comfortable and large…not at all what one might expect in such a remote area. The washer/dryer (they also supplied detergent) was welcomed as we had sweated quite a bit in exploring the area. Small kitchen, dining room/living room and bedroom. Great air conditioning and just a 5 minute walk to “town”. It is part of a resort area. Reception closes around 7, but you can use the reception desk at the adjacent hotel for any needs. Restaurants within walking distance. Plenty of parking.