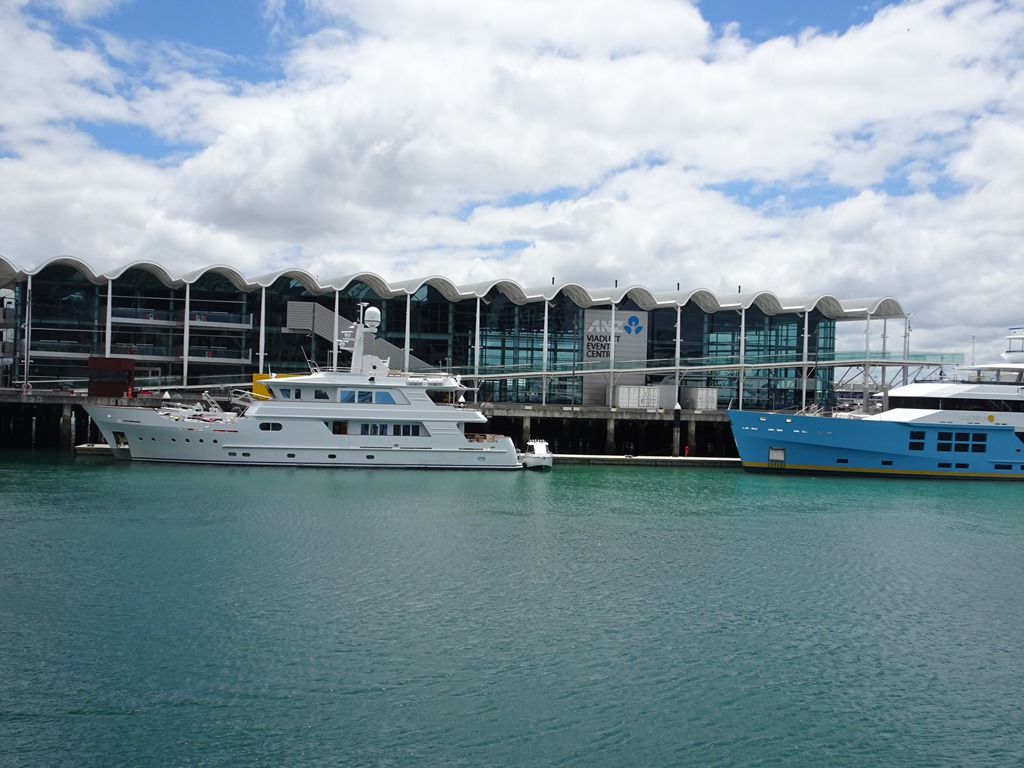 Although we have spent a fair amount of time on New Zealand’s North Island on previous trips, our only stop on the North Island this year was confined to Auckland. Auckland is the country’s largest city and commercial center. It was also the place from which our plane to San Francisco departed (which was the reason we stopped here).

Polynesians first settled the Auckland area about 800 years ago when they discovered an amicable climate, good agricultural lands and great fishing. The area began attracting British whale and seal hunters in 1769 and soon after, a few settlers. The Mauri tribes and the initial settlers established amiable relations and mutually beneficial trading relationships.

In 1830, the chiefs of a few tribes went to England, met the Queen and, believing that the British could bring peace to the warring tribes, agreed to accede to British rule and sell land only to the British. While this allowed Britain to buy land at a low price, not all the tribes were happy with such an arrangement. Not surprisingly, the British government was very happy with the agreement since they sold this land at large profits to British settlers.

Like many New Zealand cities, Auckland is largely a product of New Zealand’s gold rush. It then transformed itself initially into an agricultural center and then into a port city and commercial center. Since it is the closest large city to Polynesia and other South Pacific island chains, it has become a de facto center for transport to and trade with the islands and has also attracted a large population of islanders. This, in addition to sailing and the revitalized waterfront area, shape much of the city’s current culture and its identity of the “City of Sails”.

Although much of the central city is rather old and not especially compelling, Auckland does have some interesting streets and areas. The most dynamic area of the city, by far, is around the waterfront. After a century as a run-down port and industrial area, the waterfront has become the center of development and activity. The central waterfront, around the lovely 1912, neo-Edwardian Ferry Building, Queens Wharf, and especially Princes Wharf and Viaduct Basin have already been converted into bustling entertainment and commercial complexes.

Viaduct Basin, in particular, is lined with upscale restaurants, a Maritime Museum and currently houses at least three former America’s Cup Racing Yachts. The K21, which sailed in the 1987 Cup races and was the center of a legal controversy, is on display in front of the museum. Two others are available for charter, for sailing lessons and for competitions among amateur sailors. The basin itself, and the harbor on the other side of the promenade, are lined with an incredible collection of cruise ships and private yachts. 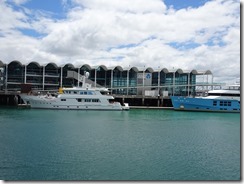 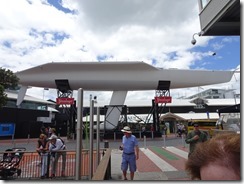 The Wynyard Quarter, just west of the Basin, was among the most rundown of the city’s waterfront and industrial areas. It, however, is now eight years into a huge 30-year plan to convert it into a preferred residential, commercial and entertainment neighborhood. A couple of modern commercial buildings, the ABV complex has already been build and a number of restaurants and parks already draw large numbers of people to the area. This is especially true on Friday nights, when the restaurants are complemented by dozens of food trucks and a free showing of outdoor movies. 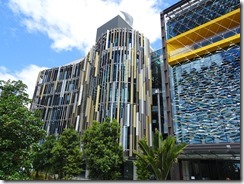 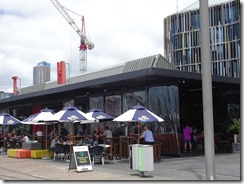 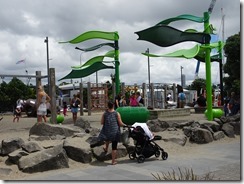 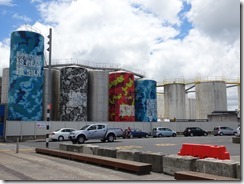 Back in the central city, the blocks just inside the harbor have razed and are now lined with modern, 20-30-story skyscrapers, the Britomart transportation hub and the pretty, multi-block Takutai Park and atrium shopping center. 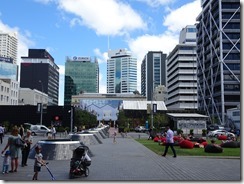 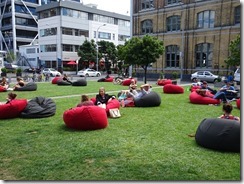 The center of the city is less distinguished. High Street, the original commercial street, now looks hopelessly outdated and has long-since been replaced by the more modern Queen Street. SkyCity, meanwhile, is the central-city’s most prominent landmark. The complex, which contains a number of upscale hotels, bars and restaurants. It also houses the country’s largest casino complex and SkyTower, the tallest structure in the Southern Hemisphere. This 328-meter tower, which was opened in 1997, is a broadcasting and telecommunications tower that is also one of the city’s biggest tourist attractions. It has a restaurant, a bar, a multi-floor observation deck and a couple of popular adventure opportunities. These include an opportunity to walk around the top of the structure on a meter-wide platform (the Vertigo Climb) and a chance to take an express, freefall-journey from the top, to just above the ground (the SkyJump). 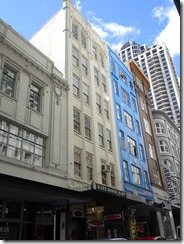 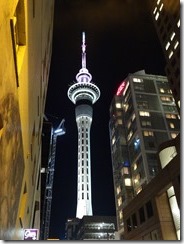 Among the CBD’s other highlights are:

And speaking of clocktowers, the one at the Civic Theater, next door to Town Halls, is also quite nice, especially when it is dappled in sunlight as the evening we saw it. So too was Aotea Square, the park behind Town Hall and the theater, which had food trucks and was preparing for a concert the evening we were there. 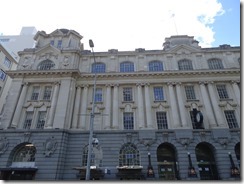 We also took a walking tour, which provided an overview of some of the city’s sights and a number of anecdotes, but not much history or many concrete facts.  Among the highlights were:

Then, pointing out to a spot in the Harbor beyond the Queen Street Wharf, our guide explained the story behind the 1985 bombing of the Greenpeace Ship, the Rainbow Warrior. The ship, which had been harassing the French was planning a nuclear test in French Polynesia. A French Intelligence unit bombed it, killing a New Zealand reporter. When the New Zealand government arrested and jailed the confessed bombers, France protested and threatened to ban New Zealand exports to France, and attempted to do so for the entire European Economic Union. Since New Zealand was so dependent on these exports, it was forced to relent. The affair, however, prompted it to reassess its entire foreign and trade policy and to distance itself from Western countries in favor of closer relations with Pacific nations.

The area around Albert Park has a number of interesting sites. These include: 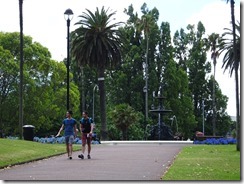 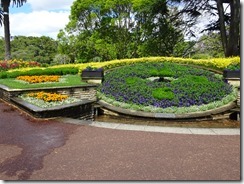 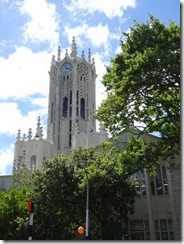 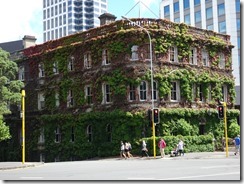