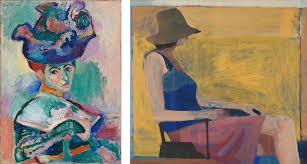 San Francisco’s Museum of Modern Art (SFMOMA) has been opened for almost a year now and we have been enjoying our membership there (at least, when we are in town). Currently, it has a special exhibit that we visited.

SFMOMA’s Matisse/Diebenkorn exhibition traces the extension of Henri Matisse’s innovative treatment of color and style into the mid-20th century through an examination of the inspiration that Diebenkorn, an important California painter, gained from Matisse and how he drew from and extended the master’s techniques.

The 100 work exhibit (40 from Matisse and 60 from Diebenkorn) starts with Diebenkorn’s initial exposure to Matisse paintings during his Initial 1943 visit to view the private collection of Sarah Stein’s private Matisse collection (Stein, along with brother Leo and sister Gertrude, was one of Matisse’s most important promoters and patrons). Diebenkorn’s subsequent visits to a Matisse retrospective in a Los Angeles and to other museums and galleries around the world continued his exploration of Matisse’s work.

The exhibit traces Diebenkorn’s career from his days as a student at Stanford, to teaching in Champaign/Urbana, Berkeley and UCLA and his 1964 Cold War-era government-sponsored trip to the Soviet Union.

It begins with his early Abstract Expressionist phase, follows him through his brief but important representational and figurative work and culminates in his incredible geometric expressionist “Ocean Park” series. The exhibit demonstrates how Diebenkorn was influenced by Matisse’s use of color, composition, technique and in some cases, even subject, such as in their still-lives of orange peels and portrayals of their respective studios.

The influences are emphasized by dozens of side-by-side comparisons such as Matisse’s “Woman with a Hat” with Diebenkorn’s “Window” and Matisse’s “Goldfish and Palette” and Diebenkorn’s “Urbana #6”. The groupings, along with descriptive material, highlight the artists’ similar approaches to abstraction–how Diebenkorn applied Matisse-like design elements such as wallpaper and textile patterns, polka dots and arabesques; the two artists’ similar treatment of human figures–especially faces; their use of interlocking shapes; and how they simplified the details of landscapes to focus on contrasts in light and color.

And speaking of color, the colors that so define the innovative and mature later work of Diebenkorn’s celebrated Ocean Park series (from 1967) seem to pull colors such as his pastel blues, pinks, yellows and aquamarines, directly from Matisse’s own palette.

For all these similarities, however, Diebenkorn continually developed, expanded and reinvented his own style. His homage to Matisse, however, is evident in everything from his subjects to his compositions to his colors.

The similarities are really interesting and the exhibit is well worth visiting.