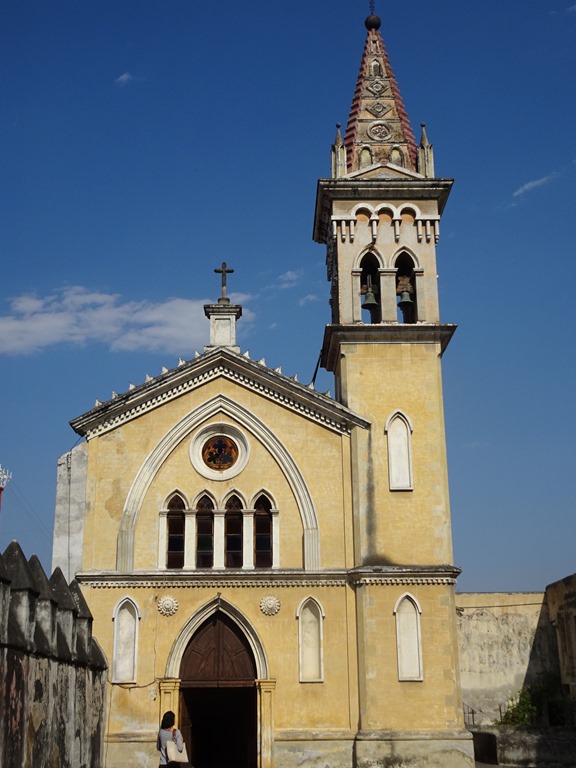 Our last stop on our Mexico trip was Cuernavaca.

This ancient (dating from 1200 BC) city retains some lovely colonial buildings and serves as a getaway for Mexico City residents. The old town indeed has some historic, impressive and lovely buildings. Among these area the: 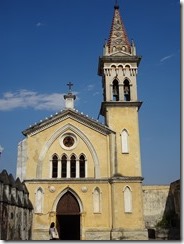 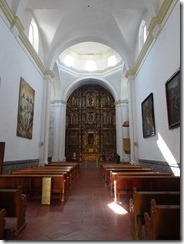 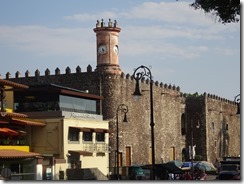 The city also has a number of pretty streets, with decorous rows of houses and commercial establishments. Some of our favorites are Calles Luis Ruiz Allercon, Comonfort, Juarez Garcia, Casares Campos and Netzahualcoyotl. A number of courtyards are also lovely, none the more so than our own hotel, Calle Netzahualcoyotl’s Villa Bonita Les Terrasses, which has two lovely gardened courtyards, including a nicely planted passageway from which hangs dozens of pretty ceramic pots with orchids., And speaking of plantings, the views we could catch of Revolution Park and Gardens also looked lovely, although it would have been nicer if the gardens were open. Or, for a bit of lively entertainment, you can try to make it through all the bars on Calle de Las Casas.

Unfortunately, there is also the not so-lovely. While a number quiet residential streets are quite pretty, the same cannot be said for a number of the city’s thoroughfares that appear to be perpetually packed with large, noisy and smelly trucks and buses. And speaking of disquieting, there’s also the huge, hulking, imposing, forbidding and foreboding black granite sculpture of Jose Morelos, a leader in Mexico’s efforts to liberate itself from Spain.

Alondra, French-Mexican café whose offerings range from tacos to fondue. We split our efforts, and although we would have preferred faster service, we enjoyed both of our main dishes. I had a chicken enchilada with lettuce, sour cream, cheese, refried beans and red sauce. Joyce a chicken breast sandwich with bacon ham, gouda cheese, avocado, lettuce and mustard mayo. We were much less enthused by the cheddar cheese nachos with jalapenos. The chips were round, stackable, Pringle-like corn chips and the cheese was closer to Cheese Whiz, than actual cheese. This, however, was made up for with a couple of very good margaritas: one lime and one a particularly interesting tamarind.

House Café, set nicely around the hotel’s swimming pool, the restaurant aspires to California Cuisine and somewhat succeeds. We had two dishes. The grilled marinated shrimp on watermelon cubes with feta and mint was light, refreshing and good. We, meanwhile, enjoyed the tamarind sauce with the grilled pork ribs, but found the ribs a bit overcooked and dry for our taste. We also enjoyed the red cabbage slaw with jicama and the jasmine rice. Wine was a repeat from Teotihuacan, a Mexican L.A. Cetto Reserva Privado Nebbiola, although this was a 2012, rather than 2011.

Villa Bonita Les Terrasses, the lovely boutique hotel at which we stayed, has just recently opened a restaurant (initially just breakfast and lunch) in the beautiful garden we discussed above. Although we have only eaten breakfast (which was included in our room price), we were impressed by both the food and the service. I was particularly impressed by a breakfast dish I had not previously had; Desayeno Morelense, a dish with a layer of taco chips, topped with sauce (a choice of red or green), cheese, cream, fried egg (with soft, runny yolk to mix in) and chills. All this with a serving of refried beans in a taco shell. Almost enough to get me back to eating larger breakfasts (in addition my customary fresh fruit, which was served before the main course.

Our hotel was the very lovely Villa Bonita Les Terrasses. It was a very pleasant place with quiet and pretty courtyard. It had a swimming pool that we didn’t use. The staff speaks little English but could communicate decently. 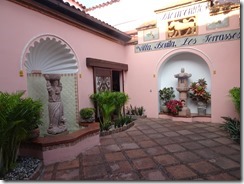 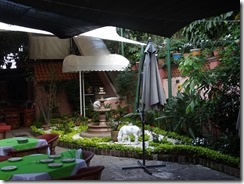