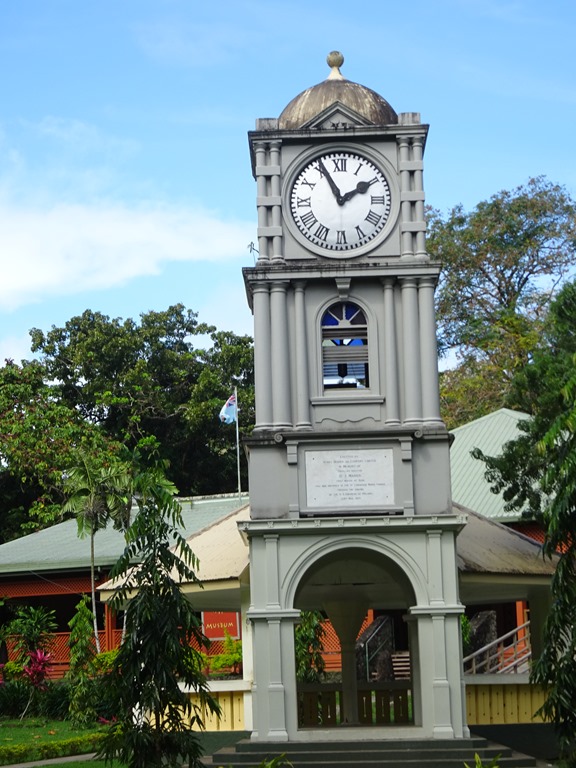 Fiji is another South Pacific dream location. Although we planned to visit three of the archipelago’s 300+ islands, we ended up on only one—the main island of Vitu Levu—in the sake of cutting our total South Pacific trip down from the initially laid out nine weeks to a more manageable seven weeks. After all, how much paradise and how much snorkeling can we accommodate at the same time, before we become jaded. So we decided to postpone Vanua Levu and Taveuni to our next trip.

We began our Vitu Levu visit, suitably enough, in Suva, the nation’s capital. With a population of about 75,000, it is the largest city in the tropical South Pacific islands.

Initially settled by mariners from Indonesia (via the Solomon Islands) more than 3,000 years ago, Fiji was the beachhead, so to speak, for subsequent migration to Tonga and Samoa, nations with which they share common heritages and cultures. It is primarily a fishing culture. The islands also produce an extensive range of pottery and carved wooden tools and ornaments and even created a salt production facility about 1,500 years ago.

By 1814, however, the sandalwood supply had been exhausted and trade slowed. Still, foreigners came and a number of sailors remained voluntarily, or were shipwrecked and marooned. Many integrated into the local population, bringing new knowledge and skills. They also brought diseases to which the locals had no resistance and by 1900, more than half the native population had died.

Europeans, however, regained interest in the islands by the mid-19th century, creating plantations to grow goods including cotton, bananas, copra, coffee and especially sugar—building the first sugar mill in 1882. But since the local population had fallen so dramatically, they had to import the labor to man these endeavors. While some of these laborers were kidnapped from other islands, the bulk of this labor came from India, in the form of indentured servants, many of whom remained when their committed service had been completed. Other free Indians and Chinese also came on their own, some to work in the fields, some to open their own small businesses. Many from both countries—especially Indians–continue to make up a large percentage of the nation’s population.

After four failed attempts at self-government, Fiji, between 1871 and 1874 formed a governing body that combined British and Fijian commissioners and local Fijian governors. After continual disagreements that threatened to devolve into chaos, the nation’s leaders requested that British manage it as a colony, which it did until 1970, when Fiji gained its independence.

A Brief Tour of Suva Fiji

We began our tour of Suva by a stop at the Fiji Museum in the lovely Thurston Park. After passing under the pretty colonial clocktower, we explored the museum where we learned the history of the country (as summarized above) and saw and learned about as number of historical artifacts. 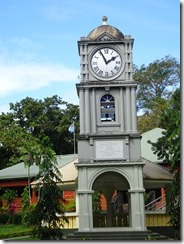 Among the most impressive were 19th century versions of a couple of the ocean-going outriggers, one of which was about 60 feet long with a sail, huge oars and shelter from the weather. The exhibit included a 19th century dugout canoe and nets, traps, hooks, spears and even poisonous branches that natives put into the waters to stun the fish and make them easier to catch. One of the prized possessions of the maritime exhibit is the actual rudder of the HMS Bounty, which was recovered from Pitcairn Bay, where the ship went down when the crew returned to Fiji. The larger second wing of the museum displays historic artifacts that include pottery shards from the time of Christ and 1,600 year-old bones. It displays remnants from different stages of the nation’s history and different islands, examples of carved whale bones and teeth, and discusses and provides artifacts from the early missionaries and their efforts (including those of Reverend Thomas Baker who was killed and eaten by cannibals in 1862) to convert natives from their traditional ancestor worship to Christianity. 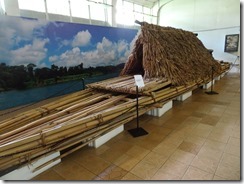 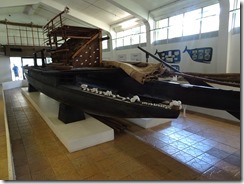 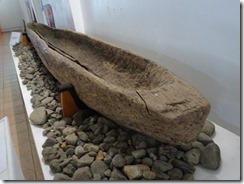 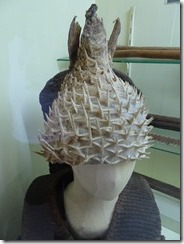 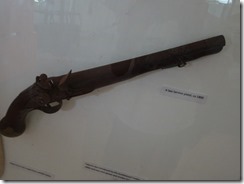 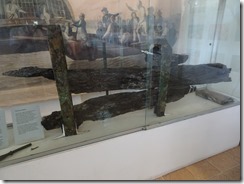 Among the museum’s other galleries are those dedicated to the islands’ natural history (with stuffed versions, pictures and explanations of many endemic and rare flora and fauna, to the nation’s Indian heritage (with explanations of the religions and culture they brought to Fiji and one devoted to beautifully preserved masi (fabric made from treated and pounded mulberry bark) garments (for high ranking officials) and ceremonial dress and carpets.

From Thurston Park, we explored the town, from Suva’s lawn bowling center to the well-manicured Albert Park and its viewing platform, to the rather imposing and austere-looking Parliament and government building complex. Although we walked through much of the central city, we focused primarily on the historic (or at least what passes for historic in a city that is little more than 100 years old) buildings. These included St. Andrews church and the Roman Catholic cathedral, the Old Town Hall and the Garrick Hotel and the city’s Carnegie Library. 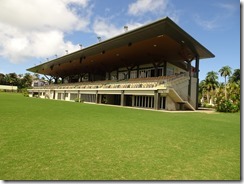 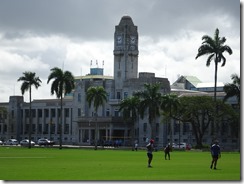 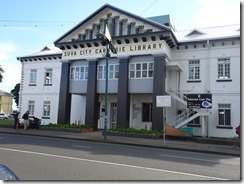 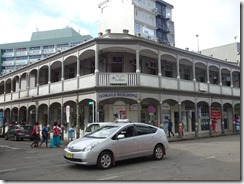 We, meanwhile, spent most of our remaining time at the straight-forward, yet elegant, century-old Grand Palace Hotel. Although it initially housed sailors and prostitutes, it was expanded and greatly enhanced into one of the most elegant hotels in the South Seas, playing host to celebrities and royalty. While it retains much of its original charm, it has been essentially rebuilt and significantly expanded, reopening in 2014. 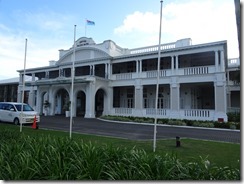 We were in the city for a single afternoon and night, enough for only two meals. We made the best of them.

Governor, a four year-old Asian fusion restaurant in what used to be the Governor’s house, is casually, yet tastefully decorated with photos and artifacts from the country’s colonial-era history. The food, however, is quite contemporary. We split two dishes for lunch. Chicken/prawn potstickers with a hoisin-based dipping sauce and grilled, turmeric mahi mahi with fried tamarind-ginger, braised bok choy and large, sweet potato fries. Although we certainly enjoyed the building and the food, we were especially impressed by George, our host and server who did all he could to help ensure that we began our Fiji adventure with a sampling of the island’s incredible hospitality. 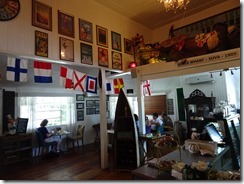 Prince Albert (at Grand Pacific Hotel). We began with a very interesting amuse of kava (juice of a fermented root) granite topped with a tangy, preserved mango skin. We then shared two dishes, beginning with disappointing lemon and mango-infused poached octopus carpaccio served on a bed of beetroot gel with burnt orange dressing and a traditional Fijian pudding made from seaweed and coconut cream, topped with sea grapes. We followed with a very good banana leaf-steamed macadamia-herb crusted mahi mahi with ricotta tortellini and a delicious passionfruit rum puree that made the dish. While the restaurant was, unfortunately out of the sauv blanc/semillon that we had ordered from the small wine list, we ended up with a serviceable 2016 Oyster Bay pinot gris.

All topped off by brief (10 minute), but very relaxing, complementary neck massages at the hotel’s spa.

We stayed at the aforementioned Grand Pacific Hotel. This beautiful hotel is located right by the government building and the Thurston Gardens. It certainly was a luxury hotel when it came to the rooms and the beauty of both the hotel and the bar area that overlooked the water. A very comfortable place indeed.