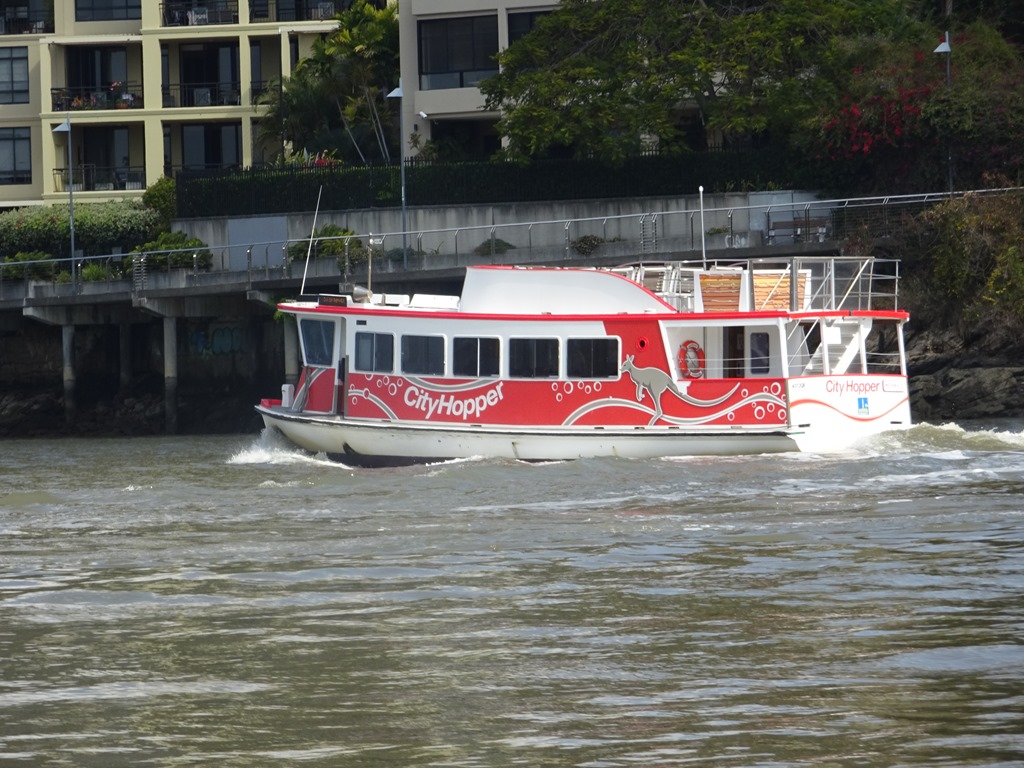 Brisbane, the third largest city in Australia, and the capital of Queensland is the only major city in the eastern half of the country that we had not been to. We rectified that gap on our South Pacific trip as a three-day stopover between Fiji and Papua New Guinea.

The Brisbane River, which loops around the central city, is Brisbane’s main feature. A free City Hop ferry provides an excellent way not only to travel around the central city, but also to provide a high-level orientation to the city. We used it for both purposes, both as a convenient transport from the southeast corner of the central city and also to gain an overview of the city’s layout and to see its skyline from different angles. And for a bit of an overview of the city, you can pop off the ferry at Thornton Street and take the short walk to Kangaroo Point, the riverside cliffs that remain from a volcanic ash flow that was eroded first by the river and then by men who used it as a quarry. Or the other option for an overview, go south from the Thornton Street stop toward Story Bridge for a climb through and above its trestles. 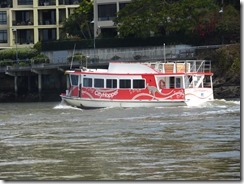 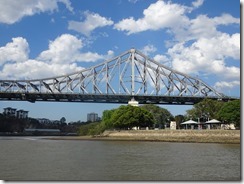 Brisbane is an overwhelmingly modern city characterized generally by high-rise office and residential towers constructed over the last 20 years, and continuing today, with cranes popping up all around the city center. Interspersed in this sea of modernity, however are a number of remnants of the city’s past, often in the form of sandstone banks and civic buildings from the late 19th and early 20th century.

Remnants of and homages to the past are evident in the northwest corner of the central city, with a couple of the city’s major churches, the Post Office and the beautifully restored Regent Theater, located on the downtown’s Queen Street pedestrian mall. This, of course, is not to forget ANZAC Square, with its statues, shrine and eternal flame commemorating the heroism and the sacrifices of the Australian and New Zealand forces that served in World War I. 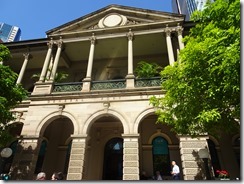 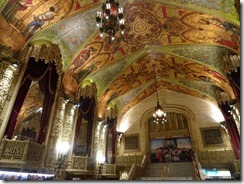 Modern commercial and residential high rises, while scattered throughout the city center, are in particular abundance in the central west, between Queen and Alice Streets, after which you find something totally different, with the tranquility of the city’s large, Botanical Gardens, with its pond, riverside walk, trees, flower gardens, open lawns and, just across the river, the striking Kangaroos Point cliffs.

To the east, the Queensland University of Technology campus and a string of grand, stately old buildings including the Old Government House, the Parliament Building, the exclusive Queensland Club, the nicely restored “Mansion” office complex and the huge sandstone Treasury Casino.

This popular near-in “suburb” has become one of the most popular sections of Brisbane, especially around the beautiful, multi-functional Southbank Park. This park, nestled along the riverbank opposite the central city, has it all. It certainly has large lawns on which people can lounge, playgrounds in which children can play and flower gardens to admire. It also has its own micro-tropical rainforest and an artificial beach. Or you could choose to swim in a more traditional park swimming pool. For food and drink, there is a food hall, a beer garden or you can BYO food to enjoy on a separate picnic island. For sports, there are sporting fields and a stadium for more organized sporting events. Cultural and educational opportunities? Take your pick. It has its own cultural center with theater, symphony hall and an art gallery. There are separate movie theaters and outdoor (covered) concert venue. Educational opportunities include a science center and museum, a conservatorium and the state library and even a small university. If you are in the mood for art you have to choose among museums of old art and of contemporary art, the aforementioned art gallery and an opportunity to learn about and create your own art in the museum’s arts center. And you can experience a different culture in lovely reconstructed, wood carved Nepalese pagoda that was originally constructed for the 1988 Brisbane exhibition. Or just take it all in from your own high-altitude perch in a cab of the 200-foot Wheel of Brisbane.

With so many things to do, the park draws thousands of people; some of whom are looking for more dining options than are available from the park’s food court or beer garden. This creates private sector dining opportunities. Just outside the park are a couple of traditional 19th-century pubs and two streets—Little Stanley Street and Grey Street that are lined with dozens of restaurants and cafes of all food types and ethnicities, each offering a choice of indoor or outdoor seating. 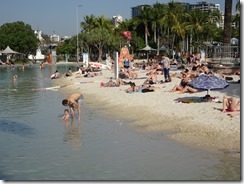 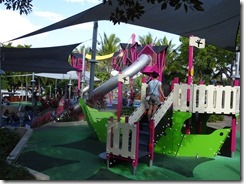 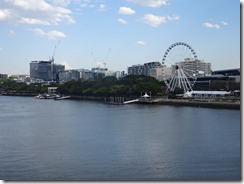 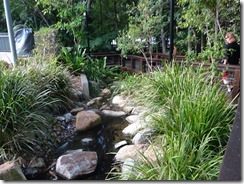 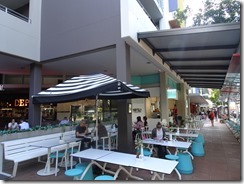 The Euro is a European-influenced restaurant whose food is based on fresh, locally-sourced ingredients. We had two dishes. Joyhce was less than inspired by her pan-roasted barramundi with baby beets, shallot puree and black garlc sauce. While the skin was nice and crisp, the flesh was mushy and the sauce had little taste. IK fared much better with pan-fried duck breast with mandarin emulsion, fermented pumpkin and roasted Jerusalem artichokes. While the vegetables were fine, they weren’t exciting. The duck, however, was tender and sweet and the sauce provided a wonderful complement; a wonderful dish. We had these with a bottle of very nice 2015 Carrick “Unravelled” Central Otaga pinot noir.

The Lab, in the Treasury Hotel, began as an ideal dining experience. Given that I planned to have a roasted rack of lamb (with zucchini, roasted green peppers, roasted garlic and wild peach jus), I was able to justify one of my favorite Australian cabs, a Wynn’s Coonawarra Black Label (2015), regardless of Joyce’s order of scallops, shrimp asparagus, snow peas and “exotic” mushrooms in XO sauce). I left her on her own with a 2016 Marlborough Catalina Sounds sauv blanc. While the cab and Joyce’s dish were wonderful, my lamb was overcooked. No problem. Our server and the chef agreed and it wa recooked. After waiting far longer than for the original, I asked about the status. They said it would be another five minutes. Ten minutes later, I asked again, they said five minutes. Ten minutes later, they said it was being plated, Five minutes later, they said the chef didn’t think it was done to the medium rare and put it in again. Next time, it was being plated. We asked for the check, planning to eat an apple for lunch, they said it was being plated. After a delay, the check finally came (less the lamb and the glass of wine). Just after it was processed, and signed, the lamb came. It was medium well. I ended up eating much of it anyway. But by then, no server would come anywhere near our table. We left without another word exchanged. They should be ashamed of themselves. And they should fire the chef, who as we were told, was not the same one who prepared Joyce’s delicious meal.

River Quay Fish, a casual, open air seafood restaurant where we had three small plates of fried whitebait with chili sauce and pickled greens; grilled Moreton Bay bugs with lemon herb butter, rice and hot/sour sauce with green papaya salad; and onion rings with a Gage Roads Sleeping Giant IPA and Mitchell Semillon. Okay for a quick lunch, but none of the dishes were at all memorable.

Aria, by far, the best meal and the best service we had in Brisbane. After an amuse of labneh with pickled greens, cucumber and dukkah, we each had a different first course. Murray cod with fennel, saffron and olive was quite good, but surpassed by the wonderful grilled Moreton Bay bugs with shitakes and seaweed butter (by far the best of the three bug preparations of this trip). Main courses were equally good, While cobia with clams, sugarleaf cabbage and black vinegar was nice, the roasted lamb loin with eggplant and miso was as standout. Our wine was a 2010 Right Bank, Cotes de Boug Bordeaux from Chateau Falfas—decent, but with virtually no fruit. The meal was completed with two delicious petit fours: chocolate tartlet in a macadamia nut crust and orange and poppy seed olive oil cake, followed, on the way out with a small box of macaroons.