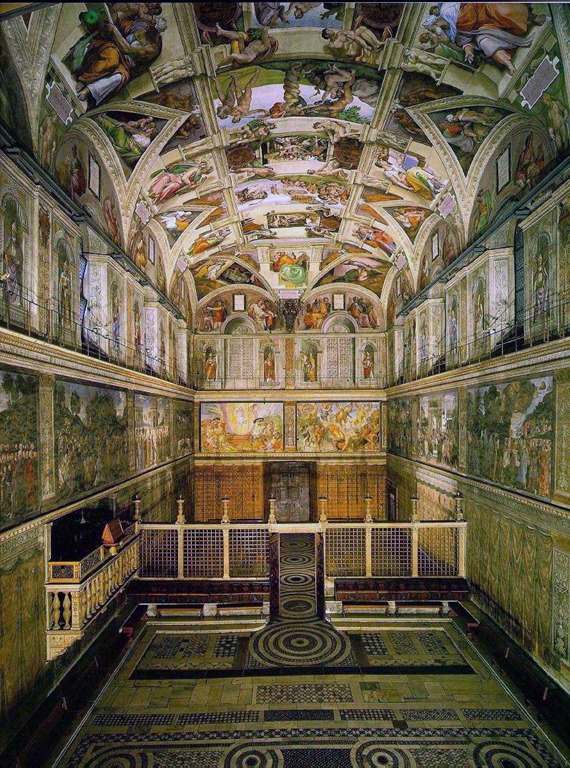 What can one say about the Vatican? The massive scale of St. Peter’s Square, the awe you experience in Michelangelo’s Sistine Chapel, the beauty of the Raphael Rooms, the treasures of the multiple Vatican Museums, the majesty of Bernini’s St. Peter’s Cathedral and Michelangelo’s dome and the way his Pieta bring tears to your eyes.

And how to react to them? With awe over their incredibly beauty and inspiration from their religious significance, or indignation over how the clergy spent the Church’s fortunes on monuments to their own vanities and lavish lifestyles rather than on providing alms to the less fortunate among their flocks?

Fortunately, this was not for us to decide. We were just there to experience perhaps the most incredible collection of art and beauty that can be found anywhere in the world.

On our  first visit to the Vatican about 30 years ago, we waited for hours for admission, struggled to figure out how to spend our time, maneuvered among the crowds to get views of particular pieces, standing with craned necks in the packed Sistine Chapel—and still not understanding what we were seeing. It taught us a valuable lesson—to find another way. The time, we signed up with Walks of Italy for a small group (12 people), pre-opening admission before the large crowds (7:30 vs 9:00 AM), professionally, art historian-guided tour of the Sistine Chapel, the Vatican Museums and St. Peter’s Cathedral.

What a difference. After whisking past the line already queued for General Admission, our guide gave us charts that showed what we would see, panel-by-panel, on the Sistine Chapel’s ceiling and its walls, explained the history and context of what we would see, from Pope Julius II’ initial commissioning of the very young Michelangelo (who had only recently completed his training as a sculptor and had not previously created a fresco), to the difficulties he faced in working on the four year (1508-1512) project, the types of mistakes that he made in working with this unforgiving media and how he rectified them.

She discussed some of the specific ceiling panels such as those of the Creation of the Sun and Moon, Separation of the Waters, Original Sin an Expulsion, Noah’s Sacrifice and especially, the iconic Creation of Adam.

She then described Michelangelo’s later (1541) greatest Sistine Chapel masterpiece, the incredible altar fresco of The Last Judgement, which depicts everything from souls rising up to face the Lord’s judgement, the paradise of Heaven, the wrath of God and banishment to Hell, numerous saints and a number of scenes from Dante’s Inferno. Also, some of the other artists’ works lining the side walls of what was designed as the Papal Chapel.

We then spent about 20 minutes, in mandated silence, wandering freely through the chapel in the company of only about three dozen people. An amazing experience! 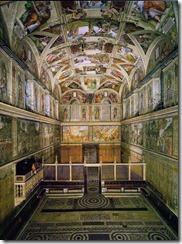 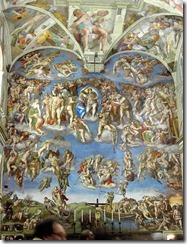 Then, after answering all our post-viewing questions, our guide brought us through the dozens of Museum Rooms—gallery after gallery of religious and secular treasures, each organized by category such as Egyptian, Etruscan, Greek, Roman, Early Christian, Medieval, Renaissance and Modern Christian art. Other galleries are dedicated to Archeological discoveries, manuscripts, Classical sculptures, Candelabra and Tapestries. There are also displays of enormous papal rings, ancient bibles, challises and many types of gold, silver and ivory religious artifacts and of some of the more spectacular state gifts to the Vatican and to Popes. 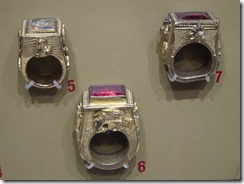 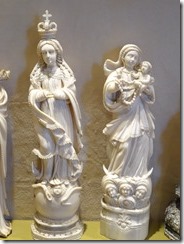 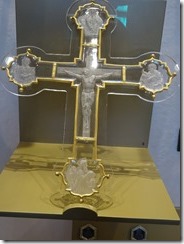 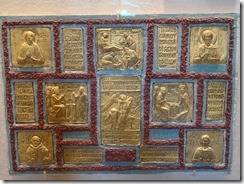 There are also a few vary different types of museum galleries. These include a fascinating: 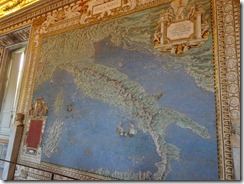 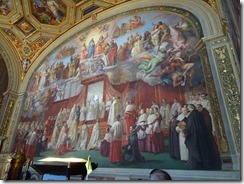 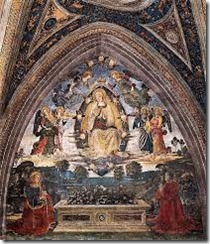 We then retraced our steps through the crowded galleries (which were never designed as public galleries and had to be retrofitted for this purpose) and navigating our way through the then, jam-packed Sistine Chapel, we enjoyed as few minutes in a sunny, outdoor courtyard before passing through the Vatican’s Post Office (postcards, anyone), and one of the few official Vatican gift stores (where you can, believe it or not, stock up on bottled Holy Water), we proceeded to the last stop on our tour:

Saint Peter’s is Catholicism’s most sacred shrine. It is also an: 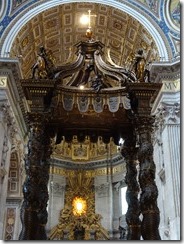 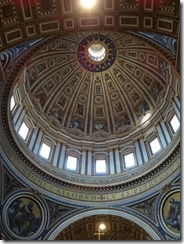 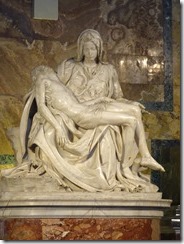 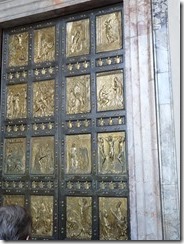 Although we spent some time on our own after the wonderful 3.5-hour tour, we were in no condition to wait for an additional hour or two to climb (or longer the take the elevator) to the top of the Dome.

By the time we exited the cathedral into the massive column-lined St. Peter’s Square, we had to literally push our way through the what would probably be a five-hour line to exit the grounds of the city-state, a separate, self-governing country that Mussolini granted the papacy in return for not publicly opposing his government or his policies.

The Pope’s control, and for a brief period, even his residency, however, extends beyond the official ??-acre confines of Vatican City. Via di Conciliazione, a roughly mile-long, divided boulevard that stretches from the Vatican to the Tiber River, is lined with former Palaces (presumably of Cardinals and other Vatican Officials), many of which have been converted into embassies and exclusive hotels. 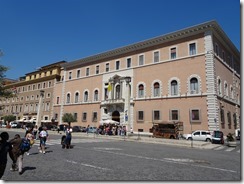 At the end of the boulevard, on a strategic bend of the river, sits a massive fortress.

This huge, 6th-century fortress, created by order of Pope Gregory, has served variously as a mausoleum (for Emperor Hadrian), a medieval citadel, a prison, a place of papal refuge (by Pope Clement VII) and currently, a museum. 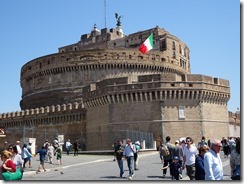 The fortress has been used to protect the Vatican and the papacy. It, in fact, had a secret, underground passage that led from the Vatican Papal Apartments, to serve as an emergency refuge. It was once used for this precise purpose for seven months in 1527, when Pope Clement VII used it for refuge during the Sack of Rome. The fortress was enhanced to accommodate its papal guests by the creation of two papal apartments, with the mosaic-floored, fresco-walled Paul III apartment being the most elegant. The castle museum is also now home to an armory and an interesting military museum that houses ancient armor and weaponry, including ornately-detailed swords, crossbows and firearms. 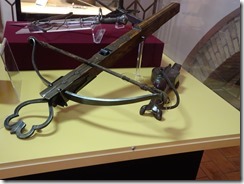