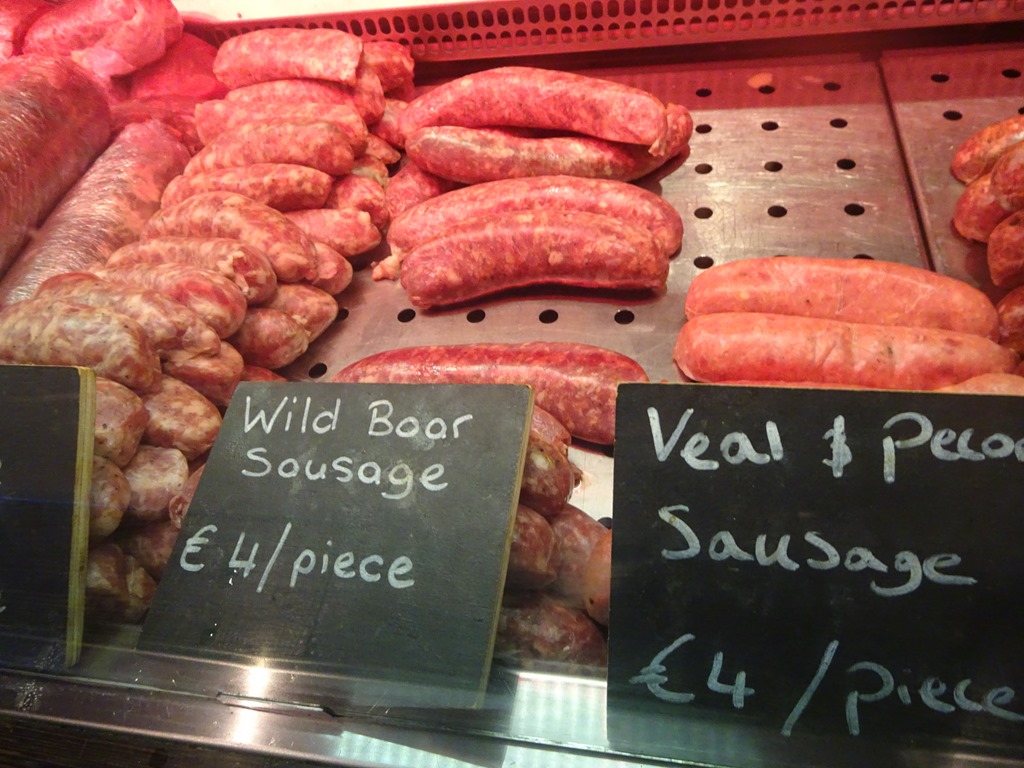 While we were staying in Valletta Malta, our hotel made some very good recommendations for eating. And we also discovered a few on our own.

Sciassa Grill is an excellent spot for meat. You are welcomed to the restaurant with a personalized discussion of the blackboard that lists daily appetizer options. Then comes a personalized tour of the meat case with about eight different types of sausage and then, the main event—a case of meat including multiple cuts of beef, and racks of lamb and veal. You choose what and how much you want, with each piece of meat cut and cooked to order. We made our choices and were pleased with all of them. We began with an appetizer of wild mushrooms (portabella, oyster and chestnut) baked with truffle butter and a soft-boiled egg that you mixed with the mushrooms. Then came a runny, smoky, grilled piatella cheese with carmelized onions which was paired with sausages (Joyce chosen three sausages for her meat course: wild boar, veal and pecorino cheese and Maltan with coriander, garlic, salt and pepper. Tom had a medium rare veal chop with mushroom sauce. For wine, the sommelier recommended a very reasonably priced Maltan wine, a 2017 Caravaggio Merlot. I ended with a generous pour of Churchill Tawny Port. 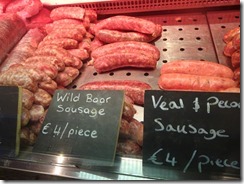 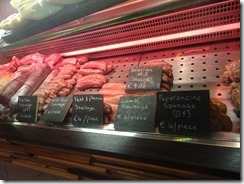 La Sfolglia Bistro, where we began with a large bowl of snails whose very unusual sauce (including white wine, mustard and Worchester Sauce) ended up detracting from the dish. Our second dish, a salt-baked whole seabass, however, more than met our expectations. On the positive side, the fish (which was accompanied by very good roasted and mashed potatoes and an overcooked bowl of vegetables) was delicious. On the negative side, it was huge—25 percent more than we could eat, but for which we had to pay. Combined with an interesting, but somewhat expensive (E30) Maltese wine (2015 Neptunus Vermentino), this was easily the most expensive meal we had on either Malta or Sicily.

Valetta and St. Paul Bocci Club is a tiny, very informal family affair. So much so that the husband and wife own and run the front end of the restaurant while their son cooks the fish caught by the husband’s brother. Although they may sell five to ten types of fresh seafood to retail customers each day, they only cook one or two per day The day we visited, they served two dishes: a very good pan-fried, whole calamari and an absolutely delicious seabass fillet in white wine, parsley, garlic, salt and pepper. With the meal, a bottle of very inexpensive (E12), quite pleasant, Maltan wine. The next day, as we happened to walk by, we decided to stop by and ask what was being served. Although he was out of food for the day, he suggested that we stop at a nearby restaurant—one at which his other son is the chef.

Beati Paoli is a more formal, more upscale affair than is Bocci Club, with a more expansive menu and higher prices and more elevated cuisine. It, along with Sciassa Grill, was one of the best meals we had on the island. Our dinner consisted of two main dishes, both excellent. These were tagliatelle in lobster cream sauce with half a lobster, and pan-fried seabass with prawns, parma ham and sage. Dinner was accompanied by another credible Maltese white wine, this a lightly-oaked, 2017 Isis Chardonnay. We finished with a dessert of sweet ricotta wrapped in a marzipan crust and a complementary glass of what we were told was a Maltese after-dinner tradition, a lightly cherry-colored and flavored prickly pear cactus liqueur.

Palazzo Paolina Boutique Hotel. This is a recently renovated palazzo, beautifully done. They have someone at the front desk 24 hours a day. When we arrived (right after midnight), the person who coordinated a taxi cab for us at the airport had already called the hotel so they were expecting us. I had requested twin beds for some reason. I requested that this be changed the next day. Once that was done, we had more room. We had to go up 2 steps to the bathroom….which is always dangerous at night. While they didn’t have any nightlights in the bathroom, they did have a mirror that lighted that we left on so that we wouldn’t trip. The owner is an artist and his art, and the art he has collected is throughout the building. The rooms are very comfortable. Breakfast is in the beautifully renovated basement. It was full of little alcoves so it felt very intimate. The staff was superb…from the desk staff to the others working within the hotel. Nothing was too much to ask of them.  The owner was onsite to provide very good restaurant recommendations. Yum. AC and wifi all functioned well. As Malta was British at one point, the plugs are British and the rooms had a hot water pot. In all, an excellent place to stay.