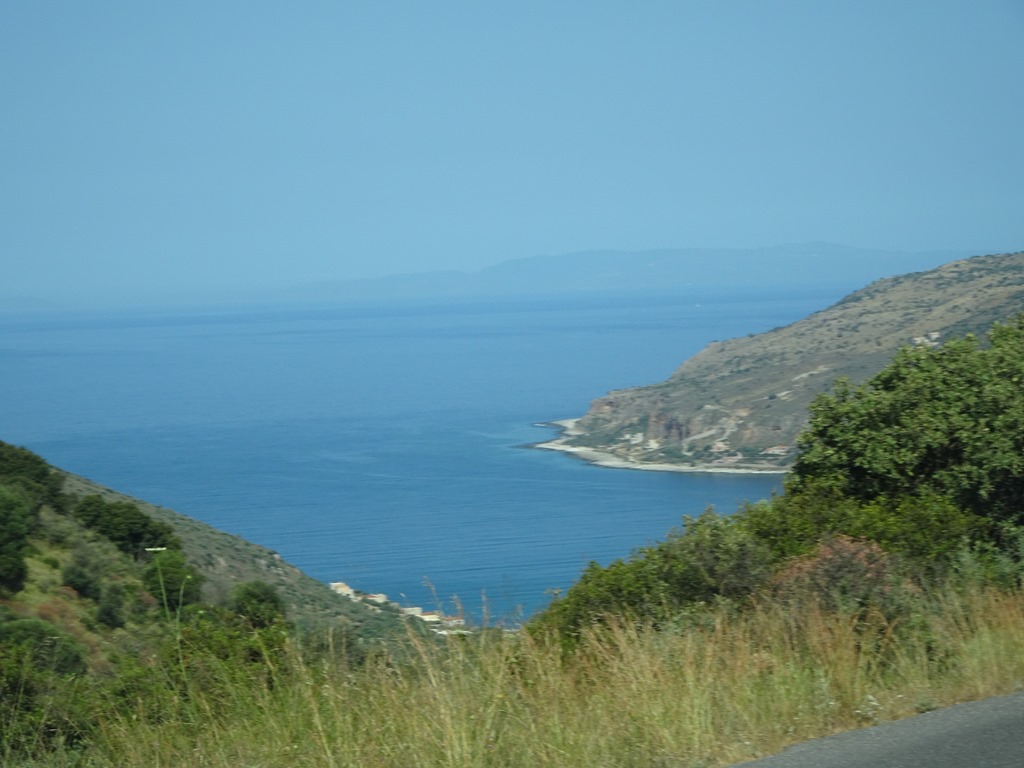 Mani is the region that covers the southwest coast of the Peloponnese Peninsula in Greece. It is divided into two primary, and roughly four sub-regions. They all share a number of characteristics. They are all harsh and, mountainous regions that are ill-suited to agriculture. And while there are a few coastal towns, the region was relatively lawless, not only in the Middle Ages, but all the way through into the early 20th century.

Clans among different villages, and even within the same villages, waged decades-long feuds. Many of the towns and villages, all of which are built from mortared stones, were fortified against intruders and most still have several 30-50-foot stone towers for protection. Sometimes, those in the same town were used against each other, with clans shooting at each other, and sometimes mounting catapults atop them, to take out each other’s houses.

Even the authorities, including the fearsome Ottoman military, generally steered clear, preferring to let the towns and clans war against each other, rather than mobilize against an occupying force. Eventually, however, their repugnance to being occupied overcame their animosities for each other. By the late 18th century, they began to unite against the Turks. One group, for example, avenged the Turkish killing of a village leader by massacring 1,000 Muslim villagers, which prompted the Turks to leave its fort outside of Gytheia. By 1821, the Mani-led group known as the Mavromichalis, after its Arepoli-based leader, began staging regular local uprisings in different areas of Mani and around the country. This growing insurgency led to the overthrow of the regime in 1830.

As mentioned , Mani is divided into two primary areas: Inner Mani, which consists of the Mani peninsula; and Outer Mani, which occupies the southwestern Peloponnese coastline above the peninsula.

Our visit to Outer Mani was limited to a quick trip around the ravine and bay that separates the two districts and a visit to the district’s southernmost town.

Oitylo is located above a lovely bay, along one of the coast’s most fertile stretches, the village was the capital of Mani (Upper and Lower) from most of the 16th through 18th centuries. Through much of this time, and before, it was also a large slave-trading center, selling Turks and slaves to the Venetians and Venetians to the Turks, as dictated by the political and economic conditions of the time.

This, combined with its farmland, made it one of the area’s most prosperous towns and led to to the construction of some of Mani’s largest and nicest homes. It also enjoyed a more recent property boom before the recent recession. This led to the creation of modern versions of the town’s traditional stone and mortar buildings for use as inns and vacation homes. 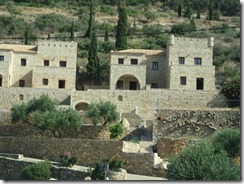 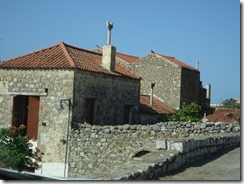 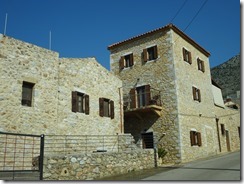 The Mani peninsula is a place of rare and stark beauty. It is mountainous, arid with steep cliffs that plunge down to the sea, creating incredible views. The landscape is punctuated by hundreds of small, typically fortified hilltowns, most with several towers. Several other towers, service as watchtowers, dot the peaks of particularly tall mountains. 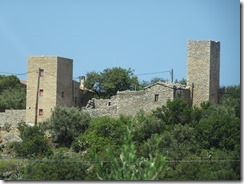 Areopoli is the region’s capital and largest town. Small, but lovely, it is built around a pretty square that is home to a statue honoring Petro Mavromichalis, one of the leaders of the national revolt that forced the Turks out of the country and set the stage for Greek independence. The compact town is occupied primarily by 17th- and 18th-century stone buildings, including a couple of churches, one with a tall bell tower. People, at lease when we were there, appeared to be leading a leisurely, small town European life, stopping to speak with each other on the street, and having morning coffee with friends. 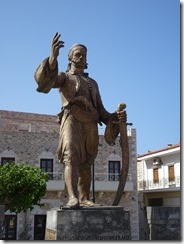 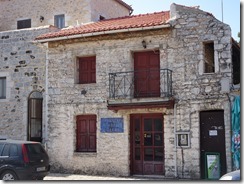 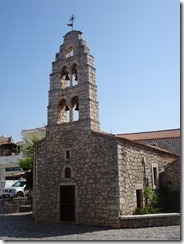 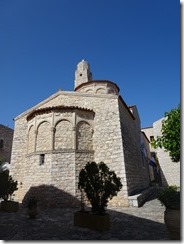 These are the largest Cave system in Greece and one that is lined, ceiling to water, with stalactites of every size, from masses of tiny structures the size of a small hair to large columns that stretch to the floor. The entrance covers two caves: a boat shuttles you through the first, whose floor is covered with a shallow stream. The roughly 15-minute ride takes you to the entrance of a second, through which you can walk. Both are beautiful, as is the coastal walk you take from the exit of the cave back to your car. 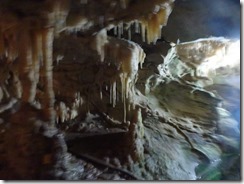 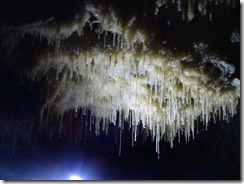 The round-the-peninsula coastal drive takes you through some, and past dozens of other small stone towns and villages, many of which were fortified, and most of which still have towers. Some of the towers, and a fair number of homes in these towns are dilapidated or abandoned, due to the lack of economic opportunities in this remote, barren region. Others, however, have been recently renovated and others are being built from scratch (all in local stone) as vacation homes or inns for tourists.

Regardless of which coast you drive down, before driving up the other, it is more than worth a few extra minutes to drive to and stop at Vatheia.

Vatheia is a charming, although a bit worn, fortified village whose stone houses and towers are set atop atop a hillside that overlooks the sea and the cape at the end of the peninsula. An incredibly dramatic setting and a view you won’t soon forget. 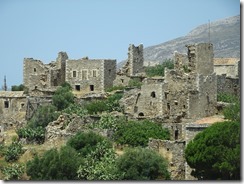 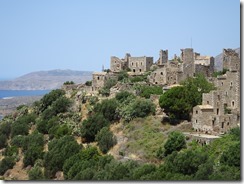