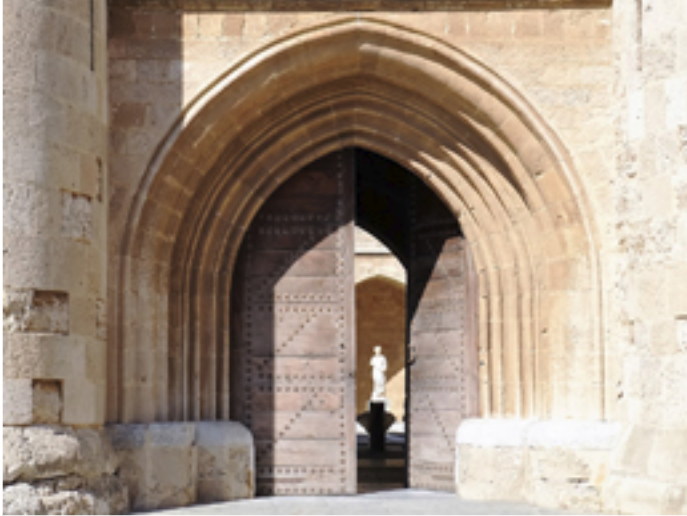 The island of Rhodes is the largest of Greece’s Dodecanese Islands. It is best known for its Colossus, a roughly 130-foot statue of Helios the Sun God, built in 305 B.C. to commemorate the island’s victory over Macedonia. Although it lasted less than 100 years, falling victim to a 227 B.C. earthquake, it had earned its perennial place as one of the Seven Wonders of the Ancient World.

By the 4th century B.C., Rhodes was already a wealthy, established naval and commercial power with a number of colonies throughout the Aegean. By the 1st Century B.C., however, it underwent a series of occupations, first by Rome, then by the Byzantines and then, to pick up a story we told in great detail in our series of posts on Malta, by the Knights of St. John, a royal, Catholic Military Order that was created to protect and aid Christian pilgrims in the Holy Lands when the Crusaders captured Jerusalem in the First Crusades.

The Knights, however, were driven from Jerusalem in 1187, temporarily moved to, but were subsequently driven from Palestine and Cypress. Then, in 1306, a Genovese Admiral who nominally controlled Rhodes, sold the Knights the rights to the island. All they had to do was to conquer and establish control over the natives: something they did in 1309. The reign of the then-called Knights of Rhodes, lasted over 200 years until a 1522 Turkish Siege ended up killing almost 500 Knights. The remaining 200 or so Knights surrendered in return for safe passage off Rhodes and eventually being granted sovereignty over Malta, which they defended and ruled for more than 300 years.

The Rhodians who supported and aided the Knights, however, didn’t fare so well. Most were massacred by the Turks who then proceeded to convert most of the Catholic churches to mosques and imposed tight controls on the island’s citizens. Ottoman sovereignty over the island lasted until after WWI, when when control passed to Italy and, after WWII, to Greece.

The island in general, and especially the towns of Rhodes and Lindos are filled with remnants of all these chapters in the island’s history.

We spent most of our very short, three and a half-day visit in and around Rhodes town (especially the Old Town section), with one day dedicated to Lindos.

Old Town Rhodes town, which is surrounded by a citadel, a 2.5 mile wall and a moat, is accessible through about a dozen different gates, all created by the Knights to defend the city against a feared Ottoman attack. And since cars are not allowed on its streets, the only real irritant is the persistent buzz of motorbikes.

The Collachium section of Old Town was built in the early 14th century, housed the Knights and the separate citadel within the walled city. This internal citadel, the Palace of the Grand Masters, was the religious, executive and administrative center of the city as well as a final line of defense. This main street of this section, The Street of the Knights, housed the “inns” or meeting houses of the knights from each of the “tongues”, or nationalities that participated in the city’s defense.

This section, which now contains most of the Old City’s primary historic sites.

Palace of the Grand Masters

The Palace of the Grand Masters, with its intimidating Main Gate, was destroyed in an accidental explosion, but was rebuilt by the island’s Italian occupiers in the late 19th century. 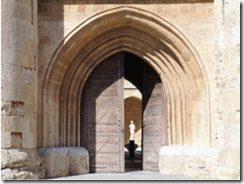 It is now a lovely cultural and historic site. It is, for example, home to two historic exhibitions:

The Palace wraps around a large, geometrically-tiled marble courtyard lined with a barrel-vaulted colonnade and studded with marble statues. 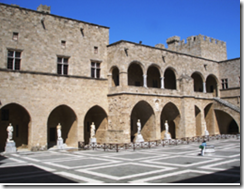 The grand first floor, which is reached via a long, grand stairway, wrapped around the entire courtyard. The of the grand, high-ceiling rooms, some with colonnaded, vaulted ceilings, others with coffered ceilings, cover early Christian-period mosaic floors that are lined with marble. Other smaller office rooms have lovely ceramic tile floors. Although furnishings and artwork are sparse (in sharp contrast the Grand Master’s Palace in Valletta, Malta), there is a limited selection of medieval furniture, mirrors, candlesticks and paintings. 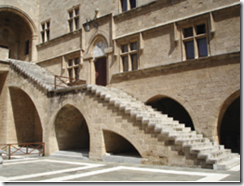 Street of the Knights

This  elegant, perfectly preserved medieval avenue lined with two long rows of stone buildings that housed the meeting rooms of the knights from each country and region. The exteriors themselves, are relatively unadorned, other than for relatively regularly placed doors, windows and arches and occasional low-relief, coats of arms carved above the entryway to many of the inns. 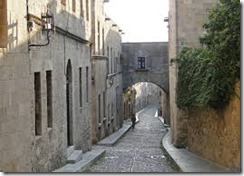 This museum is housed in what used to be the Hospital of the Knights, which provided the leading-edge medical care that was among the Knights’ primary missions. The museum exhibits some of the island’s most historic artifacts from the archaic (as far back as 5,300 years), through the bronze, pagan, Mycenean and Roman eras, up through the 18th and 19th-century rooms of the Villaragut mansion. There was a particular focus on funerary and burial practices (possibly since the artifacts were more plentiful).

Some pieces, such as the Winged Lion of St. Mark stone carving, the Aphrodite Bathing marble and some of the mosaics were especially lovely.

This museum is in a church which later became the Knight’s Cathedral and, under Turkish Rule, a mosque. It contains period frescos, paintings and religious artifacts.

The Bourg was the section of Rhodes in which the rest of the population lived. Exemplified by a maze of small alleyways, in contrast with many of the relatively large (at least in medieval terms) streets of the Collachium, and small squares, this section combines buildings of many architectural styles (in varying states of repair), outdoor cafes, mosques and one section, the so-called “Golden Mile” of bazaar shops. Among the neighborhood highlights are its: 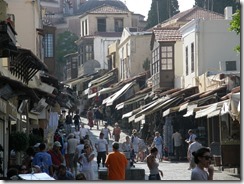 And let’s not forget the city walls and gates which were originally built by the Byzantines and dramatically expanded and rebuilt with then state-of-the-art techniques by the Knights, used to be the city’s primary bastion of defense. They now provide much of the town’ character and by walking atop them, a chance for a bird’s-eye view of what is happening.

Although Old Town has most of the tourists and the character, New Town, just outside the city gates, is another modern Greek city with apartments, shops, and many of the town’s beaches.

Although we spent little time in this section of the town, we did explore the area right beyond the harbor where we admired:

We stayed at the Marco Polo. A smile comes to our faces when we think about staying here. We admit being a little nervous about staying here as the only option was a direct booking. But Spiros was always prompt in responding via email. We loved our comfortable room with its king bed. We had a sitting room (which we only used to put our suitcases in), a small kitchen (of which we only used the hot pot and refrig). The rain shower in the bathroom was great. We did have to go up a few steps to our room as well as to go to the restaurant, which wasn’t an issue for us. No, it is not a sleek modern place that you can find in most places, and that is what we liked. It had enough of a feel of being an old mansion (which it was) and still gave you what you needed. We even appreciated the step down into our bedroom and the step down into the bathroom. And the location was great….off on a quiet street in the middle of old town Rhodes. Like most of Greece, the lights aren’t strong in the room, which could be an issue for some.

From the moment we arrive, Efi was there to makes sure we had what we needed. She brought us tea and biscuits and offered breakfast (we arrived at 11 AM). She then asked us what we wanted to do and worked out an itinerary for the time we had in Rhodes. Need a car? No problem. She arranged it at a competitive price. Need a taxi? No problem. Arranged. She offered some great suggestions on places to eat.

Breakfast (and dinner) was in an outside garden. Delicious orange juice (some of the best we have ever had!), cereal, fruit, yogurt, breads, etc. And, of course, Efie was also there to help you with any issues for the day.

This place is a gem. Great combination of people, location and reasonable priced. A great place to stay,