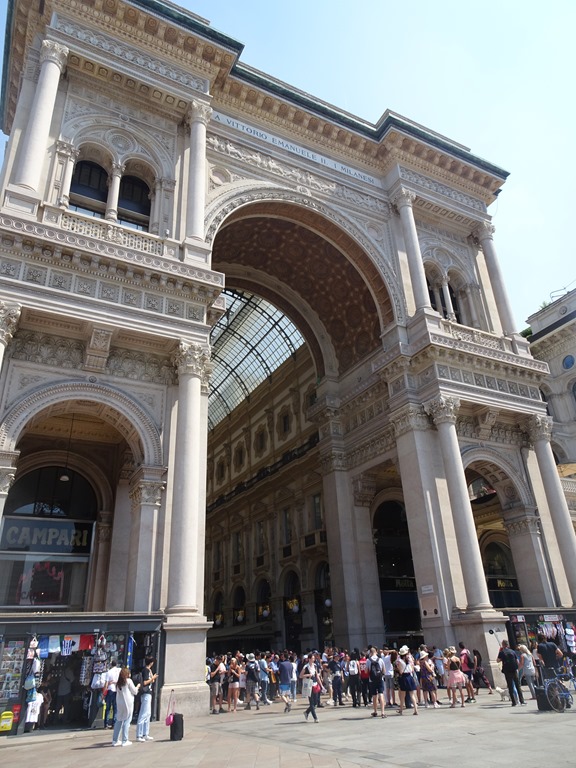 While in Milan Italy, we spend most of our time at The Last Supper and the Duomo. But we also spent some time exploring the central city and at least exploring the exterior of some of its other primary sights. These include: 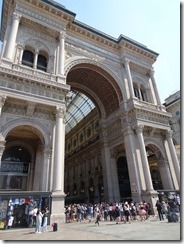 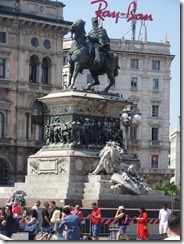 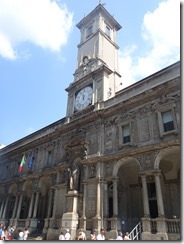 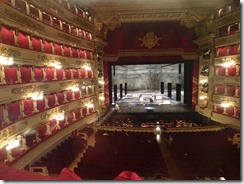 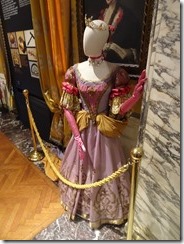 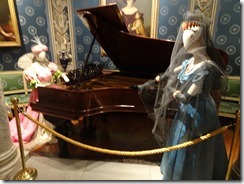 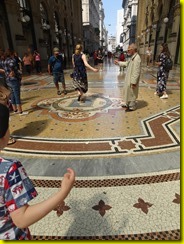 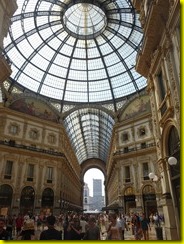 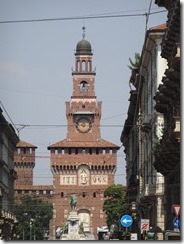 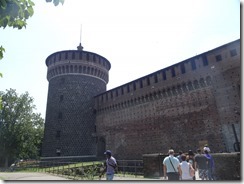 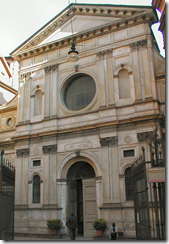 We also ventured uptown, through a number of lovely residential neighborhoods, through some intriguing gourmet shops including Rossi and Grissi Salumeria and especially, the Milian outpost of Mario Battali’s Eatily (which has wine, packaged foods and restaurants and what appears to be an even larger selection of fresh fruits, vegetables, meat and fish than its New York store and into the city’s commercial center—fronted by the city’s 19th-century northern gate, with some of the city’s high-rise office buildings. 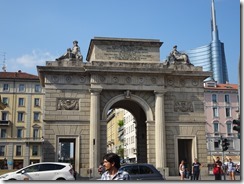 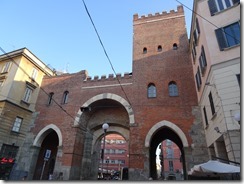 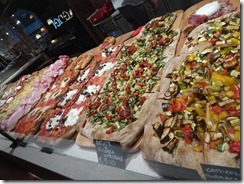 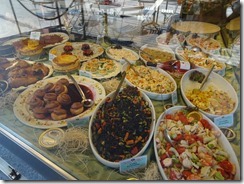 Milan, unlike many of the cities that we visited on this trip, is not primarily a tourist city. It is a large, cosmopolitan commercial city that just happens to have a number of historical artifacts. But, even though it does not offer some type of pleasant surprise around every corner, some buildings—government, commercial and residential—do have nice carving and interesting, sometimes fun, decorative details. 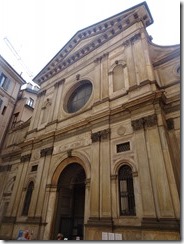 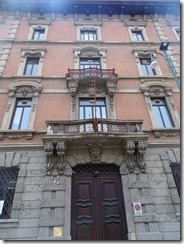 Also, while most of the best-preserved remnants of ancient times, especially of the Roman era, are in museums (especially the Archeological Museum which is built around some of these ruins), there are other examples scattered throughout the central city. These included excavated sections of ancient foundations, sections of the old city wall and occasional towers from its Roman Empire times. 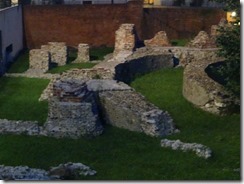 Postgo di Conversazone is located along the Brellin Canal, an evening hot spot that is lined with restaurants bars and hundreds and hundreds of people. We sat outside, next to the sidewalk and canal, allowing us to people-watch while we drank and dine. After a late lunch, neither of us were very hungry, sharing tuna and apple tartare with with a subtle lime sauce and a tuna-based main course, this pan-fried with a citrus-herb breadcrumb crust. Wine was a 2017 Sicilian Grillo from Altaville della Cortes. A pleasant, light dinner. 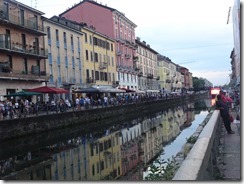 Il Brellin is also located along the Brellin Canal. This time, we sat off the street in a quiet patio. The setting was pleasant enough and the menu were both promising and we each selected our dishes: roasted, rare bluefin tuna (coated with black and white sesame seeds and horseradish mayonnaise with basmati rice and crispy vegetables) and seabass roll filled with salmon, prawns and pistachios (with streamed vegetables and salad).

Things went downhill from there. Once we settled on our food we asked our server for suggestions in selecting a northern Italian white that would complement both dishes. His response was that Italy has more than 300 types of grapes and 300 winegrowing regions. Each is different and it depended on our tastes. We explained that we understood and that was why we were seeking his suggestions. After he said that it depended on our taste, we explained some of the characteristics we would look for in a wine for these dishes. We asked for the sommelier, which drew a blank, until he eventually suggested that we speak with their wine specialist. The wine “specialist” was even worse. He proceeded to tell us his favorite white wine and again explained that all tastes differ. We asked him to describe the wine that he enjoyed—and again drew a blank. We ended up selecting a wine on our own, a 2017 Roero malinat arnais (straw colored, no oak, a bit floral and with a hint of citrus and light body) that sufficed, but would not hold up to the tuna, in particular).

When our dishes came, both were missing one of the side dishes on the menu: the promised crispy vegetables and salad were both MIA. As for the food that did arrive, the tuna was very good. The seabass, however, was overcooked and lacked taste. The seafood stuffing didn’t help matters much.

Signorvino Wine Store and Café. A fantastic all-Italian bottle shop with attractive prices and a selection of several hundred wines from different regions and at different price points. Since the trip had focused overwhelmingly on grapes and wines from the regions in which we were staying and tasting, we did not get a chance to have some of our favorite Tuscan wines, especially Vino Nobile di Montepulciano and Chianti Classico Riserva. Our first day, we decided to bring a bottle back to our room. Our choice, a 2011 Salcheto Riserva Nobile di Montepulciano was all that we had hoped.

And this was without taking advantage of the opportunity to buy the wine at retail price and enjoy it with a meal with no markup or corkage fee. Since the café menu looked interesting, we decided to try it for lunch the next day. And since bottle prices are so reasonable, we chose another Tuscan wine, this time a 2013 Vigneto di Campolungo Lamole di LamoleChianti Classico Gran Seleczione, another winner. So two were the two dishes that we ate with it: an open-face sandwich with buffalo mozzarella, 18 month-old parma ham, cherry tomatoes and arugula (to which we added olive oil and balsamic), followed by pici pasta with wild boar ragu with chopped rosemary and parmesan. A great selection of wine at retail prices, great, casual food, prompt and efficient service (with humor) and a seat along the city’s busiest pedestrian mall. What more could we ask for?

Osteria di Breca, in the city’s restaurant-rich Breca district, was a lunch spot recommended by our concierge. It turned out to be another disappointment. Joyce began by asking for recommendations between two pasta dishes. The server suggested a third, tagliatelle bolognaise, as the restaurant’s best pasta dish. While the pasta was almost al dente, the sauce was, at best, uninspired. Tom chose veal Milanese, which was sliced/pounded so thin that it was virtually impossible to see, much less taste the meat between the layers of breading. This, as would be expected, also made the dish very dry.

Corte Visconte was way outside the city of Milan, but quite close to the airport. As we were flying out the next day and we stayed at the airport, it was an excellent alternative to anything we were likely to find at or much closer to the airport. After three straight days of Piemonte wines, we ventured down to Tuscany for our last bottle of the trip. This a 2015 Poliziano Vino Nobile di Montepulciano. Our dinner consisted of three dishes. Although we weren’t particularly impressed by our starter of stuffed squid with Steilo risina beans and bacon in a light tomato sauce, wee both enjoyed our main dishes. I had a creative take on Veal Tonnato, with veal medallions (not quite the veal chop that ws listed on the menu) with a tasty tuna sauce (which unfortunately mixed in marinated carrots) on a bed of roasted red and yellow peppers and potato slices and a tasty veal sauce. Joyce’s meal was less innovative, but equally good: black and white sesame-crusted tuna with steamed spinach and roasted potato slices, carrots and eggplant.

UNA Hotel Cusani. As planned, the location was right near all of the historic places. The hotel itself didn’t have the clean lines of more modern places, but don’t let that stop you. As we are Expedia gold + members, we were upgraded to a wonderful Junior Suite. Very large king plus bed, wonderful bathroom. We did look at a superior room which was smaller and had a tub/shower combination but took the junior suite. A big difference. We had an issue with the temperature in the room but decided to live with it and keep the larger room. While it is a nice hotel, and the staff was amazing, it suffered a little from being an older place. There is only so much one can do with infrastructure without ripping it out and starting from scratch. In addition to the air conditioning not being very good, the temperature in the shower fluxuated, and the elevators were small and very slow. Still, the staff was amazing the location was great.