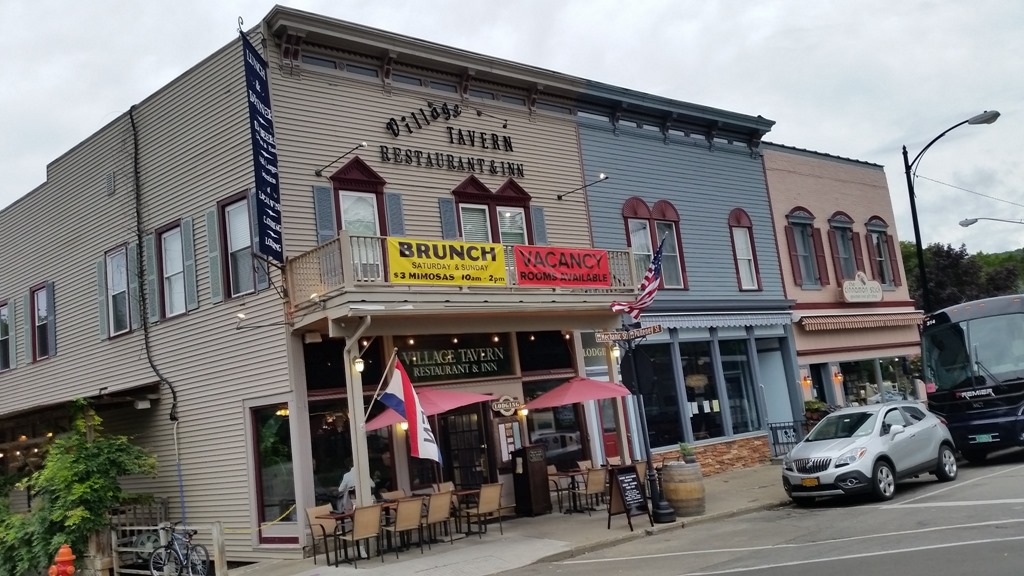 Traveling around the Finger Lakes

Central New York has a series of lakes  which look like fingers from the air—well, maybe a lot of fingers. No surprise that this area is called the Finger Lakes Region.

We grew up not far from this area (Syracuse New York) and have visited it several times. This time we came to attend a TBEX (Travel Blogger Exchange) conference. We had some time to ourselves as well some tours of the area as part of the conference.

We began with a day of wine tasting (the region has one hundred plus wineries) and restaurants, beginning in Hammondsport, at the south end of Keuka Lake, and then driving about halfway up each side of Seneca Lake, all in search of wineries (see below). Our Seneca area visits focused on Corning, the host city for the conference, and Watkins Glen.

We spent part of a day and one night in  Hammondsport. The town center, although postcard pretty, is tiny,

Dinner in ”downtown” Hammondsport was at Timber Stone Grill where we enjoyed two very good main dishes—coriander-crusted seared ahi with sushi rice and green onion and citrus ponzu and a 16-ounce bone-in ribeye with Gorgonzola cream and fried Vidalia onion strings. Neither of us could finish our protein, much less the accompaniments that came with them or the two huge side dishes that each of us could choose with our meals. The best of these were Applewood bacon roasted Brussel sprouts and roasted garlic whipped potatoes. While the french fries were pretty good, the creamed spinach was less than inspiring. And since we were on Keuka Lake, we decided to try a wine made from Keuka Lake grapes–a pleasant Keuka Springs Merlot.

Watkins Glen is known primarily for its Watkins Glen International speedway and the gorges and waterfalls (especially beautiful after the rain) in and around the lovely Watkins Glen State Park, the second most popular in the state. While we did not have a chance to hike its gorges this trip, we hiked and wrote about it on a previous trip. And we certainly enjoyed some of the waterfalls that popped up after heavy rain.

Corning New York was founded in 1833 by Erasmus Corning. It is literally a town built on glass. Corning travelled from New York to a spot on the recently built Chemung Canal. He built a railroad from there to Pennsylvania and relocated his glass company to the community, selling 40 percent of its shares to local residents. Corning Glass has been the mainstay of the city ever since.

The town’s primary sites are centered in two areas. First is Market Street, the pretty, restored 19th–century street that is home to most of the city’s shops, restaurants, art galleries, one World-class museum (a branch of the Smithsonian Institution). And then there are Corning’s glass studios and galleries. We explored many of these galleries and studios, finding two (both just off Market Street, on Cedar Street) to be of particular interest. 171 Cedar Arts is something of an interdisciplinary arts incubator with studios, practice areas, exhibition spaces and performance areas for local musicians, dancers, actors and artists. We were particularly impressed by an exhibition of photographs by Robert Houghton.

Even more impressive was the Rockwell Museum, a family collection of art that traces the American experience, from colonial times, through the Manifest Destiny period of western expansion and into modernism. The museum includes art of all media, from Indian ceremonial products to Frederick Remington statues, to Hudson school paintings and finely crafted and decorated 19th-century pistols and rifles.

The highlight of Corning, however, is the world-famous Corning Museum of Glass. Since our conference and closing party were both held at the museum, we had free-run of the museum, We had plenty of time between sessions and meetings, to explore all that the museum had to offer and to partake in complementary glassmaking activities. The huge, multifaceted museum is discussed in detail in our next post.

Although of our meals were at the conference,  we did have two dinners at local restaurants. We selected two of the more upscale establishments:

Staybridge Suites. This hotel is a 7 minute walk to the Corning Glass Facility and was very convenient to our conference. Our room was very comfortable. It had a separate bedroom and a a small Livingroom/kitchen area. It was a very pleasant place to stay. The breakfast was very good with cereals, eggs, bacon, fruit, waffles etc. And the staff was very accommodating. They also have DVDs available (and a DVD player in your room).