San Francisco’s DeYoung museum is always a treat to visit. We recently checked out two lovely and illuminating special exhibits.

We are used to seeing the traditional, loose-fitting black abayas and hijabs that Muslim women wear. But this exhibit shows eye-opening fashion that is unlike what we expected. The exhibition showed examples of hundreds of garments intended for use in all types of activities–from active sports through religious and royal ceremonies. Some had head coverings, and many didn’t. Although some are indeed black and relatively loose-fitting (albeit with considerable style), others are barely recognizable as Muslim. A number are almost form-fitting, some with belts to emphasize a woman’s figures. Colors range from beiges to brightly multi-colored blues and greens and some even make use of sheer fabrics, although typically over stylish opaque garments.

So contemporary and popular are such fashions that they are a rapidly growing the market. They have emerged into a global market and have attracted the interest of Yves Saint Laurent, Chanel and other large, Parisian and Milanese design houses. Some designers are introducing expensive, limited editions that women from royal families or those that regularly appear n global Best Dressed lists wear.

While the exhibit explains the increasingly global nature of the market, as spurred by fashion blogs and social media, it also notes some of the many reginal variations intended to appeal to local tastes and requirements. It explains how Muslim clothes have extended far beyond their religious origins into a wide range of uses, including, somewhat counter-intuitively, as a political protest symbol (as abayas were once used to protest the policies of former Indonesian President Sukarno). 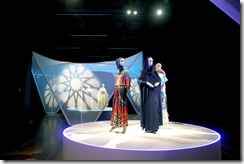 The Gaugin exhibit at the DeYoung was effectively a mini-retrospective on his career. It traced his early career under his teacher and mentor, Camille Pissarro and the evolution of his style from realistic, detailed landscapes, seascapes and portraits, through the emergence of his Impressionistic style and ultimately, his Oceanic art. It explained his deep interest in, and effort to portray relationships and spirituality in his works and how this manifested in different stages of his career and his personal life, including his marriage to a wife who served as an agent for his work—an arrangement that continued even after his estrangement from his wife and daughter.

His career, while largely Impressionistic, included experimentation with Symbolism, Synthetism and other styles and included wood carvings and ceramics

He was friends with, and collaborated with many of the leading Impressionists and ceramicists. In fact, he was visiting Van Gogh in Arles when the later, in a disturbed act of self-mutilation, cut off his own ear.

Gaugin’s growing interest in Pacific art, culture and spirituality eventually led him to effectively abandon his wife and daughter and spend years in Oceana (especially Tahiti). It is here that he produced many of his most iconic works and pioneered the use of flat fields of bold color and dark outlines that so influenced Cubists (including Picasso) and Fauvists (Matisse).

But despite his artistic range, his innovations and the sophistication of his styles, he never managed to achieve the level of commercial acceptance to which he continually aspired.