We have done virtually everything there is to do in Key West, from parasailing above the coast to snorkeling and scuba diving beneath the seas. We have taken the obligatory Conch Train tour, sailed and kayaked its waterways as estuaries, browsed all the galleries and visited virtually every museum and historic site. (See our 2016 blog on the area).

On a recent visit to Key West, we spent time learning more of the Key’s fascinating history.

Ponce de Leon discovered Key West in 1513. Then came the pirates, who used both Key West and surrounding islands of the Dry Tortugas as their bases in the 16th and 17th centuries. They sought out and plundered some of the heavily-armed Spanish Galleon treasure ships.  The pirate escapades, combined with potential Spanish, French and British threats to the new country, prompted the building the nearby Fort Jefferson  after the War of 1812.

But the pirates weren’t alone shaping Key West. The area’s notorious storms and shoals layed the foundation of the city’s mid-19th century development into the most prosperous city in the country. As the waters pummeled ships, dozens of salvage companies rushed in that. After attempting to rescue survivors, they were granted rights to retrieve and sell portions of the wrecks and their cargo (a story told in the Shipwreck Museum). Many of the salvage company owners and ship captains built grand Victorian homes that still grace many of the city’s streets.

The city went from one economic boom to the next. By the mid-19th century, sponging and turtling fueled the city’s economic boom, Then came the Cuban immigrant-fueled cigar-rolling industry and key lime farming and later, shrimping. The early 20th-century (1912 to be exact) marked the beginning of the next, and longest-sustained of Key’ West’s economic booms: Tourism.

Henry Flagler wanted to link Key West to the mainland. He spent tens of millions of dollars to build a 128-mile railroad to the area. In addition to money, this dream also costs hundreds of lives due to hurricanes, accidents and diseases. But by 1912, he achieved his goal. This brought the first round of tourists and nature enthusiasts to the island.

When a 1935 hurricane destroyed the railroad, the State of Florida bought the infrastructure to use it as a foundation for an Overseas Highway, which was completed in 1938. Dozens of artists were amongst the early tourists. John James Audubon, Winslow Homer and so forth portrayed the region’s natural beauty in paintings.  Ernest Hemingway, Tennessee Williams and many others enhanced the town’s visibility and reputation through their books. Not surprisingly, more and more tourists journeyed to Key West.

Walking through Key West is like walking through history. We took a a self-guided walking tour that is offered by The Old Island Restoration Foundation.

First up was famous Mallory Square. One has to go there for the beautiful sunsets and buskers.

But Mallory Square also has  old wreckage and sponge warehouses. Its original Coast Guard Administration Building has been converted into tourist shops. The Customs House is now a history museum. City Hall is a interesting building with outside art. The Naval Commandant’ residence was updated to serve as the Summer White House for President Truman and later, Eisenhower. All nice to walk by and visit if you have the time. 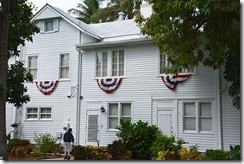 Then we walked by beautiful homes: those in which Hemingway and Audubon stayed, the oldest house in South Florida (1829).  and most interesting, through the more residential Old Town neighborhoods around Eaton, Simonton, Williams and Caroline Streets. These are the neighborhoods in which many of the town’s early salvage and sponge magnates and ship captains build multi-story mansions (a number of which have been converted into Inns) that echoed the styles of early colonial Caribbean plantation mansions. Some are open to the public. 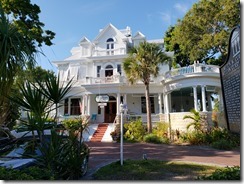 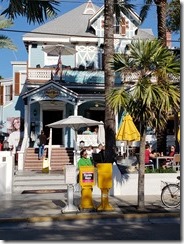 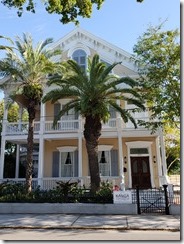 Among the most lovely of these Old Town properties are those whose shrubs and walls hide large, lovely tropical gardens. Examples include gardens at the Audubon House and Hemingway House and those of a number of still-private residences and Inns, including those of the Harbor Inn, where we stayed.

A couple gardens are most notable for what is in them, rather than for the gardens themselves. These include:

Key West is well known for its time-honored tradition of the “Duval Street Crawl”,  named after the town’s main commercial street and home to many of its open-air bars. It’s fun to wander from bar to bar in search of the best music, the largest crowds and the strongest drinks.

We also scored a stage-side seat at Aqua, one of Key West’s growing number of Drag Bars. The line-up of queens rotated throughout the show, each lip-syncing and acting (usually with sexually suggestive props or references) a song, followed by suggestively dancing through in search of free-flowing tips. A fun evening for sure.

Little Pearl, a small restaurant in a pretty section well out of downtown with an eclectic, French/Asian seafood-focused menu. We shared two decent, but slightly disappointing appetizers, a delicious entrée and a pleasant bottle of wine. The broth of the sake-steamed manila clams suffered from too much lemongrass and the cobia ceviche was a bit vinegary for Joyce (although Tom did enjoy it). We both thoroughly enjoyed the grilled Grouper (a lucky substitute for the planned wahoo, which was not available that day). Although the rice in the leek risotto was more overcooked than we would have preferred, the taste of this and the fish’s red wine caper sauce were very good. While we lusted over the Archery Summit on the small, very well-curated wine list, we compromised on another, decent, less pricey Willamette Valley Pinot Noir, a 2015 from Lange.

Latitudes, a lovely restaurant on a private resort island (accessible by launch from the mainland) that is perpetually rated as one of the best in the Keys. While we ate a wonderful lunch there on a previous visit, this year’s dinner did not disappoint. We began with a nice anchovy-laden Caesar salad followed by two delicious entrees: Steamed grouper with a turmeric, beet-citric sauce and seared sea scallops on a bed of corn polenta with sautéed chard and a sauce of orange-bourbon gastrique.

Half Shell Raw Bar, an atmospheric, coastal dive bar “wallpapered” with vintage (primarily vanity) license plates from the 50 states, has been one of our go-to lunch stops since our first trips to the island. While it will long be fixed in our hearts by being one of the few restaurants to offer stone crab claws, we were less enthused by the Hogfish sandwich this time (more a function of the fish and the cut than the preparation) and by the small, rather dry fried oysters. The bar also has a nice selection of beers from which Tom enjoyed the full-bodied Stone IPA much more than the light, citrus Shipyard Monkey Fist IPA.

Eaton Street Fish Market, where we began with crab claws and conch chowder, followed by a grouper sandwich (all okay, but none our favorites).

Waterfront Brewery, one of the many bars lining the harbor boardwalk, where we ordered a very nice grilled Key West pink shrimp ABLT (avocado, bacon, lettuce and tomato) sandwich to carry us through the 3.5-hour ferry ride to Ft. Myers and Naples.

Key West Harbor Inn. This is our second stay at this boutique property. The grounds inside the gate are beautiful. It has a small pool with chairs and lounges surrounding it. Happy hour is from 4:30 – 5:30, where guests linger over drinks and appetizers which change daily. Breakfast is also around the pool area with serve yourself selection of cereals, breads, yogurt and hard boiled eggs. Our second floor room was comfortable, albeit a little hard to maneuver around the king bed (which we wanted). The bed was also on a frame that stuck out and was sure to hit your shins in the night. It had a Mr. coffee pot, and refrigerator. While the room had a small TV, we didn’t use it. The bathroom had an overhead shower head. AC and an overhead fan in the bedroom kept the room very comfortable. Outside our room was a nice little sitting area on the balcony overlooking the pool. This is a cute boutique place that has very friendly staff. Not plush, but not basic either. Expensive but everything in Key West is expensive. Location is perfect right near Mallory Square.