Chicago has long been one of the country’s premier Blues Venues. Our plan was to spend a number of hours reveling in its musical history at the city’s premier annual Blues Celebration:

Every year Chicago holds a blues festival.  In 2019, it held its 36th annual, three-day celebration. Music is played in multiple venues across the city, with most of the headliners appearing in downtown’s Millennium Park’s Pritzker Pavilion. We planned to be in Chicago for this event. Alas, Tom has the wrong date on his calendar and we missed it. Still, it is worth pointing out as a great venue for those who love blues music (we have participated in the festival on previous trips). Darn. But if you like blues, this is an event to put on your calendar (and double check the dates!)

However, we partially compensate for this mistake by spending two evenings at another Chicago blues venue.

Kingston Mines is Chicago’s oldest (since 1968) and largest (two large rooms, each with a different stage) continuously operating blues club. We spent the better part of two evenings at the club. During each evening, various bands played, first in one room an then in another room. We totally enjoyed the first of first night’s bands: Vance Kelly played such a compelling combination of blues and Motown, and his sax playing, in particular, was very engaging. In fact we were so engaged that we came back the next night too. 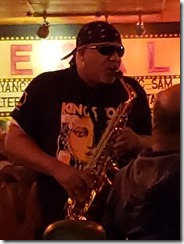 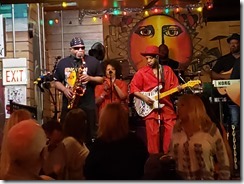 Although we enjoyed much of the first set of Corey Dennison on the next night, the evening’s second act, we were less enthused by the folksy-blues renditions of Joanna Conner and decided to head back to our hotel.