We recently spent a few nights in Mendocino California. We always enjoy the town’s 19th-century town’s character, its water towers, gardens, and lovely residential streets. While we rarely visit most of the touristy stores, we never seem to tire of strolling through the headlands or the town’s streets. And as a bonus, during our stroll, we heard a couple of songs from blues and folk singer Ruthie Foster, who was performing the last set of the day at the Mendocino Music Festival. 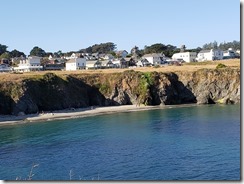 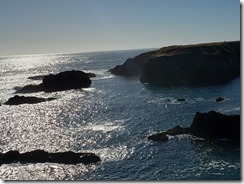 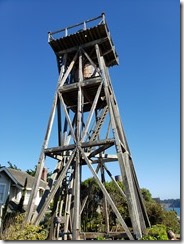 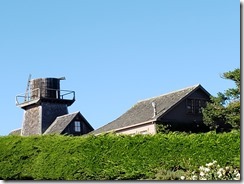 We visited several of the area’s many parks.

Jug Handle is an incredibly varied park where we walked the lovely, five-mile (round trip) interpretive trail through a veritable geological time capsule. It takes one across five distinct, geological epochs from the still-forming beach, through the meadows of the headlands and three, older, forested terraces, each of which has different soils, plants, and hydrological conditions. Each terrace is about 100 feet above that of the previous one and was formed in separate geological periods (approximately 100,000 years from the previous terrace). They were formed by a combination of tectonic plate movements, uplifting, and continual fluctuations in sea levels over periods of global warming (higher sea levels) and ice ages (lower levels). Numbered post, which corresponds to an online document, describes the soil, drainage, and plants in each of the five zones, including the fir, redwood, and pygmy forests. In the pygmy forest, the trees (especially Bolander pines), grow to only about ten percent of their normal height due to the zone’s soil. Due to half a million years of leeching, the soils here are 1,000 times more acidic than in the slightly younger redwood zone. This increased acidity has dissolved much of the soil’s iron, which combines with bedrock to create a hardpan that retains acid and reduces drainage. 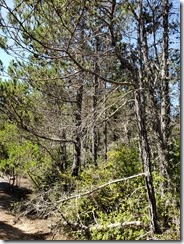 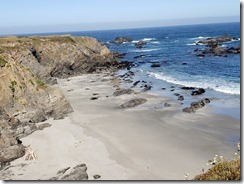 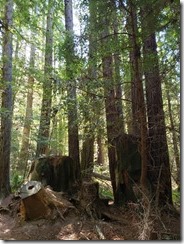 The Mendocino Headlands are right next to Mendocino’s scenic main street. We strolled the acres of lovely headlands enjoying views of the ocean, several coves and beaches over a series of rugged, heavily eroded shoreline cliffs.

MacKerricher State Park is in Fort Bragg, which is not far from Mendocino. Here we walked the headlands, past several coves and beaches. Of particular note is: 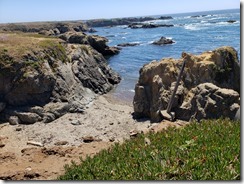 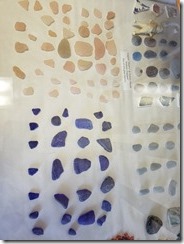 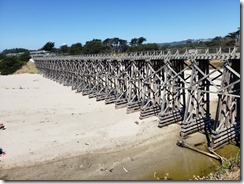 The Mendocino area also has some other interesting areas outside of the parks.

Pacific Star Winery is a family-owned winery is up the coast from Fort Bragg. If wine is not your thing, it is still worth a visit for the beautiful view of the coast. The winery, founded by Sallie, who cut her teeth at her own Napa Valley winery in the 1980s. She returned to the area in which she was raised to build a home/winery. She produces roughly 20 small-production wines from primarily Italian varietal grapes grown in the Ukiah Valley. While it is well worth a visit for the scenery alone, the winery also produces some very credible wines, including Chenin Blanc, Charbono, Barbera, and Tempranillo. 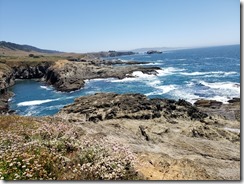 Fort Bragg is a short ride from Mendocino. It is always fun to stroll Fort Bragg’s old town area to see some of its nicely-restored, 19th-century buildings and visit some of its many galleries.

This trip provided time for two dinners and one lunch. Dinners were at:

Hill House Inn. While Hill House is a little dated, it seemed clean. At least we thought it might be clean until we saw how our room was cleaned during our stay. The sheets on the bed were pulled up but the bed’s top cover remained jumbled on the floor where we had kicked it off. Strange. Towels were changed and we couldn’t see any evidence of anything else being done. The carpet is old so you can’t see how dirty it might be (or not). The sink had cracks, and the tub faucet dripped continually. The bed was very soft. Surprisingly, the sheets were comfortable, although the pillow was a bit hard. Kleenex was probably the scratchiest that we have seen in many, many, many years and reminded us of toilet paper in Europe 40 years ago. Breakfast had muffins and cereal and yogurt. Coffee and tea were available in the lobby throughout the day. The initial person behind the desk became the joke among the people at our breakfast table as to how robotic she was and the poor first impression she made. Would we stay here again? If the price was right, yes as there are few affordable choices in Mendocino.