In our last several blogs, we wrote about numerous places to visit in Montana. These included:

This blog talks about some of the other places we visited in Montana.

Gardiner Montana is a small town that is the northern gateway to Yellowstone National Park. It is a tourist town packed with shops, motels, restaurants and outdoor activity concessions.

We made a brief overnight stop here at a hotel and for dinner as we were leaving Yellowstone. And of course, we walked up and down the street with shops and restaurants. 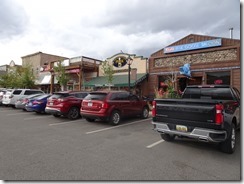 We had dinner at Wonderland Cafe. This popular, casual restaurant had very good comfort food. We enjoyed the elk burger with cheddar and sweet potato fries. However, the Chili Mac combo of beef chili was not as expected. It had large chunks of ground beef in a moderately hot, spicy sauce onto which an absurdly large amount of shell macaroni (covered with a thin layer of cheese) was poured. The wine list, while limited and basic, did include a pleasant, inexpensive 2018 Argentinian Alta Vista Malbec.

The Roosevelt Hotel was not exactly in the Gardiner main area but was a short car ride away. This is a newish place that is somewhat bare-bones. The room was more like a boxcar. It was long and narrow with no real spot to put things other than on the floor. Still, it was clean. “Breakfast” was cold pastries and coffee and juice. Not very inspiring but it was something and not very expensive.

We spent an evening and night in Bozeman Montana. The city was named for the wagon train leader who brought the first settlers to the lush valley in which it is located. The wagon train trail also brought many others—so many that it aroused the fury of the Sioux Indians who felt this was a sacred hunting ground. The Native Americans ended up launching so many attacks that the trail created by John Bozeman (who was himself killed in a raid) was effectively abandoned until the U.S. Army subdued the raiders.

Today, Bozeman is the center of one of the state’s richest agricultural areas and is home to Montana State University. We strolled the Main Street historic district which, as appropriate for a college town, is loaded with bars, casual restaurants and active outdoor shops, including those for clothes, bikes, fishing and hiking/backpacking equipment. 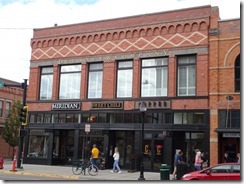 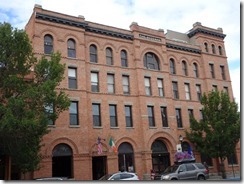 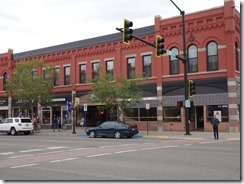 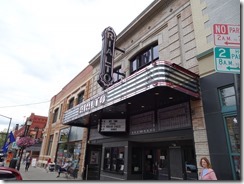 The Beartooth Highway is supposed to be one of the most beautiful roads in Montana. That’s saying a lot. Although we originally planned to drive the long, twisty, mountain road, the travel blogger conference we in the area to attend thankfully arranged a tour: Far better to let a professional driver, familiar with the road to drive and allow Joyce (our designated driver) to leisurely take in the views.

That was the plan. Unfortunately, our tour happened to be on the wettest, coldest day of the yet early autumn. Most of the drive from Billings to Red Lodge, at the base of the highway, and much of the drive up to the Highway’s vista point was obscured in rain. We weren’t expecting much as the road climbed higher. At best, it would be blanketed in fog. At worse, the rain, combined with the low temperatures and high winds at the 10,948-foot pass (the border between Montana and Wyoming) summit would envelop us in a blinding blizzard.

Although the pass was closed before we even reached the highway, we did make it up to one of the highway’s vista points. As luck would have it, there was no snow, the rain had slowed and the fog had lifted enough to yield lovely views of fog and clouds in the valleys and around the surrounding peaks. 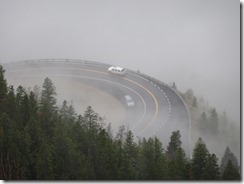 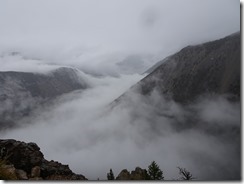 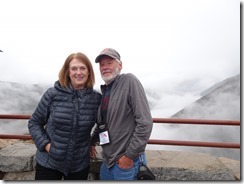 While the views that day were far from the views of the promotional pieces, they were certainly better than we expected. Our downward trip, meanwhile, was so draped in clouds and fog that we didn’t have any views on the way down. By the time we arrived in Red Lodge for lunch and city and museum tours, the rain intensified.

Our tour stopped at Red Lodge. This pretty town was an initially prosperous early 1900s-era coal-mining city of about 3,000 people (down from about 4,000 at its peak in the 1920s). Today it is a nice tourist stop around Beartooth Highway and in the winter, ski center. 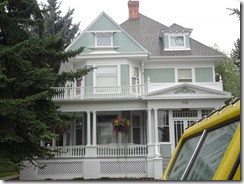 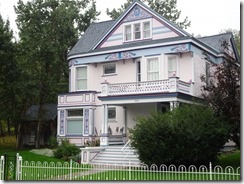 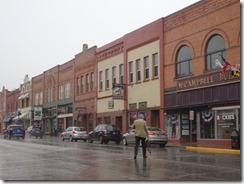 Red Lodge was founded in 1884 when the Crow nation was persuaded to sell rights to a strip of land that was thought to have extensive coal reserves. Mining rapidly became the town’s mainstay. It attracted a rapidly growing array of immigrants from several European countries (most of whom settled in their own native neighborhoods) to work in the mine. All went well, or at least as well as life in a coal mining community can go. Workers earned good wages and the city grew into a peaceful, prosperous community.

The depression and WWII changed life here. European coal production greatly expanded and coal prices fell. This, combined with a 1943 methane-fueled mine explosion and cave-in that claimed the lives of 47 Red Lodge miners, spelled the beginning of the end for the city’s mining activities.

The opening of the Beartooth Highway helped to position the town as a tourism destination. The 1960 opening of a ski center turned the city into more of a year-round destination. \

Before touring the town, we stopped for lunch at Bogarts Restaurant. The owner of this county-themed burger and Mexican restaurant has a serious thing for the iconic movie idol, whose pictures and movie posters lined the walls. Joyce had a tasty guacamole burger with melted cheddar. Tom got a huge order of shredded chicken nachos which he shared with the table, still leaving more than enough to feed the rest of the 3,000-person town. And since the restaurant is known for its many flavors of margaritas, of course, we had to try them. Delicious and a nice place for lunch. 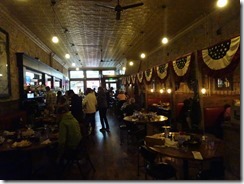 Then on to tour the town in a fleet of three of the city’s fleet of five, beautifully preserved 1937-39 Yellowstone Touring vans. The vans were built specifically to carry tourists up and across the then recently opened Beartooth Highway. The beautiful vans, as the driver emphasized, are “preserved”, rather than “restored”. This means that broken parts are, wherever possible, repaired but are not upgraded with new components. In good weather, the canvas roof can be rolled back. Unfortunately, it was pouring rain but we still had good views from the windows. We also made a stop at their museum where we saw other preserved vehicles. What a fun way to see the town. 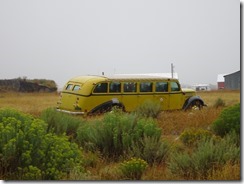 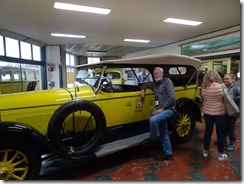 We then stopped at the Carbon County Historical Center. The center paid homage to the early town’s celebrities, the most colorful of which was John Jeremiah “Liver Eating” Johnson. He was an iconic Old West Mountain Man, Civil War hero and scout. He later became Red Lodge’s sheriff and subject of a Robert Redford portrayal in the movie “Jeremiah Johnson”. He was, as his nickname suggests, best known for his rumored eating of the livers of the Crow Warriors who supposedly murdered his wife and child (rumors that he half-heartedly denied).

The museum also celebrates the area’s previous Native American inhabitants, the ethnic diversity on which the town was built and its local institutions. One complete floor (appropriately, the basement) is laid out and designed as a coal mine. It comprehensively tells the story of its mining heritage, from the founding of the mines, the lives of the miners, through the 1947 disaster, to the present. 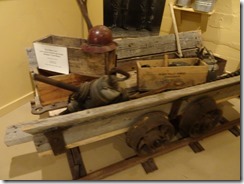 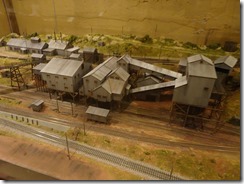 It explains that while Montana still has huge coal reserves, it is leading safety, environmental and reclamation standards. The bad news (or good news depending on your perspective) is that the taxes for making coal mining safer has made its coal pricing uncompetitive with other states. This is dramatically reducing the state’s mining activities and employment. Instead, It is expanding its focus on other, more environmental-friendly, not to speak of worker-safe activities such as agriculture, tourism, and education.