You don’t have to go too far from Billings Montana for some interesting side trips.

One Billings Montana side trip is sixty miles away–The Little Bighorn Battlefield National Park Memorial. It commemorates the spot of General George Armstrong Custer’s famous Last Stand. It portrays the battle not as an individual military encounter, but as one of the more important last chapters of a clash of civilizations and visions as to the relationship of man to the land.

The visitor’s center shows provides a brief introductory film of the partnership between the Lakota (also known as Teton Sioux) and the Cheyenne Native Americans, the leadership and vision of Sitting Bull, and the reasons the Creek Native Americans decided to partner with the U.S. government in battling their traditional enemies. It broadly explains the context for the Little Bighorn battle and how it unfolded. It traces the relative roles of the US battalions led by Marcus Reno/Frederick Banteen and Custer. It shows how a lack of intelligence, errors in judgement, and a lack of communications over the vast battlefield resulted in a doomed military attack that caught both the soldiers and the Indians by surprise.

A set of displays begins with the roles of the political leaders of both sides—President Grant and Sitting Bull, and displays the clothing/uniforms and the weapons used by each. It explains the backgrounds of Custer and Sitting Bull and provides a number of Custer’s own possessions—including his favorite buckskin outfit. 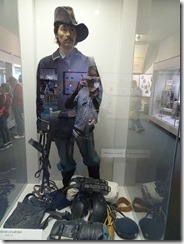 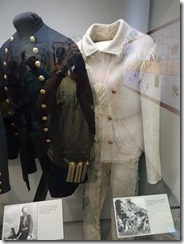 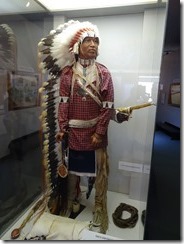 A four-mile audio-guided tour of the battlefield describes how the multi-front encounter unfolded and has markers representing where the soldiers fell. (The Indians removed their dead immediately after the battle, without marking the spots.) 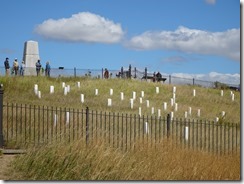 Most interesting is the area known as Last Stand Hill, the area to which the remainder of Custer’s outnumbered and out-of-rifle ammunition battalion retreated. It is where they ended up shooting their horses using handguns and taking cover behind the horses’ corpses when they ran out of handgun bullets. 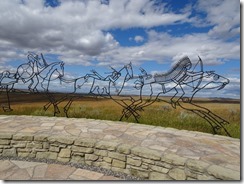 Stones mark the spots of the fallen—including Custer himself. The hill also has a poignant memorial to the three Indian tribes, their leaders and their fallen warriors. 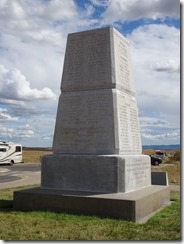 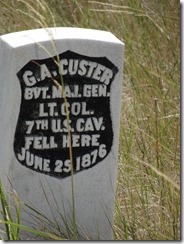 While battle’s death toll was relatively small in terms of military campaigns (210 dead from the Custer’s,  53 from the Reno/Banteen battalions and somewhere between 40 and 100 Indians), the battle marked the end of one of the last chapters of the government’s determined quest to make the West safe for white men.

Context of the Battle

The visitor’s center, going through the area and reading the park brochure and newsletter helps explain the battle, why it occurred and what it meant. But we also caught a 45-minute ranger presentation which gave us a far broader economic and political context of the country’s push into the northwestern territories.

The campaign to push the Indians off of the settlers’ lands (or that of prospective settlers) began decades before. But it was not a major issue as long as settlements remained east of the Appalachians. Tensions grew steadily after the Louisiana Purchase and the subsequent focus on Manifest Destiny (a widely held belief in the 19th century that US settlers were destined to expand across North America).

The ranger gave us a brief overview of the clash of civilizations and world views. He explained the Army’s role in protecting civilians (including against Indian attacks). He talked about the animosity that William Tecumseh Sherman and Andrew Jackson (both of whom came to lead the subsequent campaign) had shown against Indians and the Jackson-led “Trail of Tears” deadly forced march of the Cherokees from their Georgia home to Oklahoma. The march happened despite Grant—their former Civil War commander and current President and Commander in Chief—did not share these views.

In fact, Grant originally wished to grant large tracts in which Indians could live separately, plus exclusive access to even larger hunting areas. The devastating economic 1873 Panic, a depression spurred by huge losses from the speculation in the stock of railroad companies, played a decisive role in changing Grant’s calculations. With unemployment up to 20 percent and severe economic hardship throughout the country, Grant had to do something. Unfortunately, the country’s adherence to the Gold Standard limited his options for reflating the economy.

The 1874 Black Hills gold strike provided an opportunity to increase the gold supply and for Grant to address inflation. However, he faced another problem. White men were hunting buffalos to extinction (from a population of about 50 million in 1840 to fewer than 1,000 in 1890). And the government was failing to deliver the food they promised the Lakota and Cheyenne. Starvation was forcing the Indians to act. Although the Indians didn’t have the weapons to directly attack U.S. forts, they did attack unprotected white men—including miners trying to make their way to the gold fields.

Despite his initial intent to secure a safe space for the Indians, Grant was pressured to protect miners on their way to the gold fields. He, therefore, authorized the Army to create safe passage routes—which meant subduing the Indians.

This prompted proactive Army raids on Indian villages. But it wasn’t easy as Indians could pack up their teepees and move villages very quickly with few traces. Soldiers found it difficult to track them. When they did, the soldiers were merciless. They captured women, the elderly and children to serve as human shields against the Indian warriors.

Previously, the Indians had been fighting defensively, keeping soldiers at bay while allowing their families to move their villages out of harm’s way. But once their families became human shields, they began to take the offensive and attacked soldiers before being attacked themselves. This led to an Indian victory in the June 17, 1876 Battle of Rosebud Creek and a set of miscalculations that led a vastly outnumbered Army unit to launch what turned out to be a disastrous attack on an Indian village at Little Bighorn on June 25.

It was this shocking loss, days before the country’s centennial celebration, that provided the national will to address the “Indian problem” once and forever. This solution was to exercise all means necessary to subdue the “savages” and force them into unfair treaties that the country would continually abrogate.

A visit to the park was a sobering reminder of some of the atrocities that our country has undertaken in the past.

All of the learning about the battle made us hungry. With few places around the battlefield, we decided to eat at the Custer Battlefield Trading Post which is right outside the park. In addition to an interesting array of Indian crafts (not to speak of typical souvenirs), the trading post is reputed to have the best Creek flatbreads in the region. These puffy, doughy, round fried bread are indeed tasty, albeit greasy and filling, Tom had one as part of an Indian taco, which was topped with ground beef, lettuce, tomato, salsa, and sour cream and is like a taco salad. While the toppings were okay, the bread was the most interesting part of the concoction. Joyce had a tasty buffalo burger. Considered that lack of alternatives, this was very good indeed.. And while waiting for your food, you could browse through all of the interesting items in the trading post, including medicinal herbs. 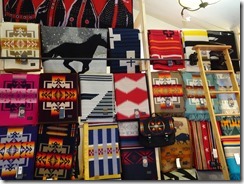 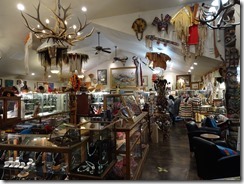 Pompey’s Pillar is another interesting Billings Montana side trip. It is about 20 miles east of the city. This 150-foot tall sandstone monolith stands above the plains at what used to be (before damming) a natural ford of the Yellowstone River. This was a natural observation post for Indians (for whom it was also sacred), settlers and explorers—including most famously, William Clark, co-captain of the landmark Lewis and Clark (Corps of Discovery) Expedition.

Thomas Jefferson organized the expedition to survey the northern reaches of the recently acquired Louisiana Territory and, ideally, find a navigable water route to the Pacific. While the two-year expedition verified that no such route existed, it provided the first detailed maps of the northwest territories as well as detailed geographic, zoological and botanical observations as well as detailed cultural and language information about more than 20 Indian tribes.

What is the significance of Pompey’s Pillar to the expedition? It provides the only verifiable evidence of the passage of the expedition through this point. William Clark inscribed his name and the date of his return trip visit (July 2, 1906) on the sandstone monolith. (The visit was further verified by precise documentation in his journal and artifacts of the camp at what was then the ford.)

The visitor center and a series of interpretive signs explain the origin of the expedition, the roles, and fates of its participants, the hardships they endured and how the managed to overcome each obstacle.

This, along with the battlefield, illuminates two fascinating chapters in the history of the United States’ exploration of and expansion into the northwestern part of the country and the evolution of its relationship with the Indians, from Lewis and Clark’s dependence on Sacagawea, their female Indian guide and the tribes with whom they traded. 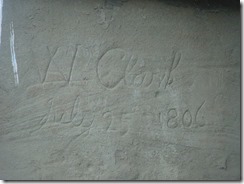 Culture on the Prairie

Tippet Rise Art Center is approximately 65 miles from Billings Montana. If you like outdoor sculptures or music, it is well worth a visit.

This non-profit art sculpture garden and music center is in Fishtail Montana. It is an active 12,000-acre sheep and cattle ranch (and winter elk reserve) that also has 10 outdoor sculptures and hosts classical chamber music.

The complex is open three days per week (Friday-Sunday) for between two and three months per year, depending on the weather. It attracts musicians from around the world, some of whom stay to compose, perform and record music for a full season.

Many of the 10 outdoor sculptures are spread far and wide across the entire ranch and are site-specific installations. Others have been donated or lent by, or acquired from, other venues such as Storm King and the Hirschhorn and placed in strategic locations.

Since the primarily abstract expressionist pieces are so widely spread across the ranch, one either needs to take a can tour (a total of ten, 10-person tours per day) or, if you are hearty you can bike or hike the long trails of the very hilly mountainous area. The good news is that all concerts and tours are priced at a mere $10. The bad news is that concerts and tours are usually sold out well in advance, although standby tickets may or may not be available.

While we were not around for one of its classical music concerts, we did catch one of its guided art tours. In our  2.5-hour guided van tour, we learned that the ranch started as homestead parcels. One cabin and one house still remain from that time period. 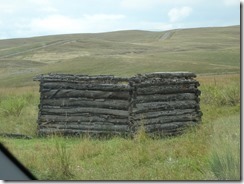 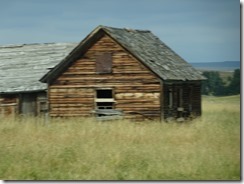 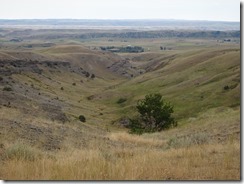 One sculpture (Daydreams) took this philosophy to an extreme, building it entirely out of cypress from the ranch. 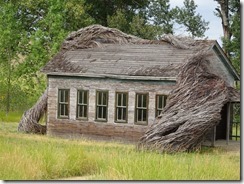 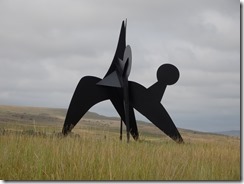 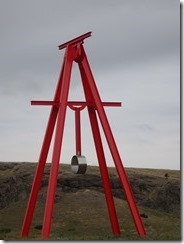 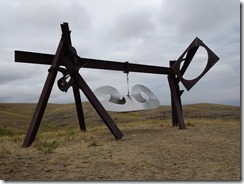 Beethoven’s Quartet is a particularly interesting kinetic and acoustic sculpture that consists of a free-swinging stainless steel form (that is moved by the wind) that is mounted on an oxidized steel frame. The form, when struck with a rubber mallet, makes a different pitch, long-persistent tones depending on where it is struck. 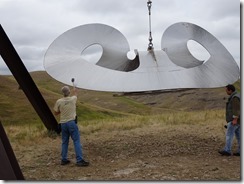 Some of the most fascinating, however, were created by lesser-known artists. These include: 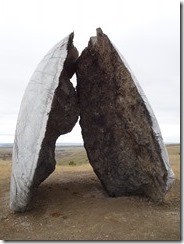 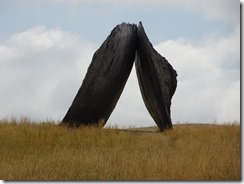 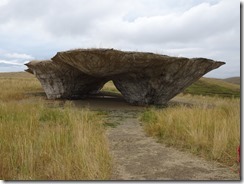 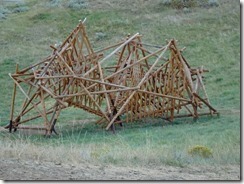 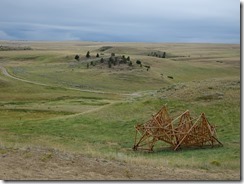 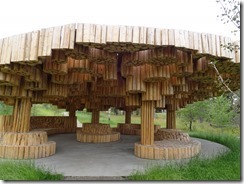 Tippet Rise is a wonderful place. We just wish that we were able to attend a concert at the Domo and that it did not take 2.5 hours to explore the complex.