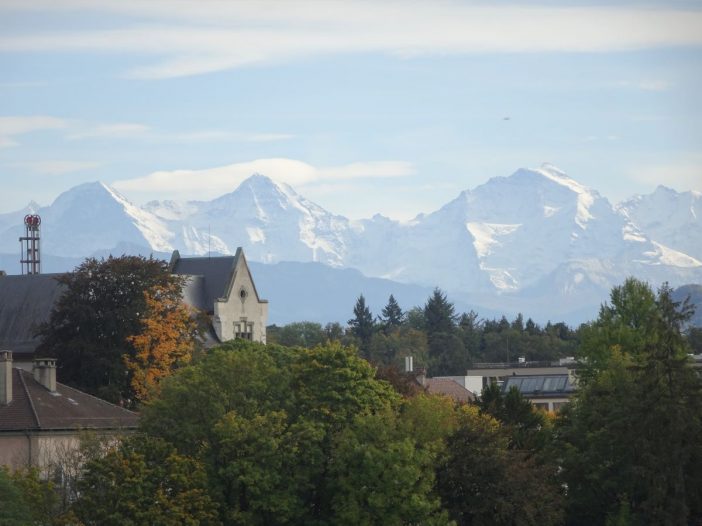 Bern Switzerland is the lovely, historic capital of the country. It is located on a steep ridge that is virtually encircled by a sharp bend in the Aare River. Berthold V, (Duke of Zähringen) founded the city in 1191. The city prospered and joined the Swiss Confederation in 1354.  In 1848, it became the Swiss Confederation’s capital. After a 13th century fire, the city was rebuilt in sandstone, which generally stands today.

Bern’s Old Town lies primarily inside the river bend. Its multi-story red-roofed buildings have arcaded, street-level shops with residences over them. The cobblestone streets are primarily dedicated to pedestrians and public transport. A series of bridges connect the streets to the newer parts of the city. Public fountains, statues, and towers are interspersed among the medieval buildings.

Among the most historic and interesting of the buildings and monuments that we found during our visit are:

Somewhat further afield are a couple of interesting art museums (the Kunstmuseum and the Paul Klee Center), an Alps museum (the Schweischeg), and several other specialty museums, none of which we were able to visit during our one day in the city.

Another spot to visit is Gurten. This high mountain (864 meters) is just south of the city. It provides 360-degree views of the city, the Alps, and, on a clear day, into France and Germany. Below lies the gorgeous city with its towers and domes, while the spiky Alps jut from the countryside beyond. You can also see across the Three Lakes Region all the way to the Jura mountains. Be sure to climb up the tower–it’s free, and the views improve with every step. Several trails around the mountain offer leisurely hikes through flowery meadows and into thick forests.

We stayed at the Savoy Hotel Bern. This 4- star hotel is just steps away from the train station in old town. Our king-bed room had a private balcony, although the view wasn’t much. But it gave us several windows without street noise to open as the room was too hot for us. The room had a hot pot for tea and a coffee maker. The staff was very good. But we did find a few issues. The comforter on the top of the bed was one piece and barely covered the bed. When 2 people were in the bed, we had to sleep towards the middle to be covered. We did not have bathrobes in the room. I guess you had to ask for them. Wifi access was only for 3 devices. Again, you had to ask for more. As most people travel with 2 devices each, this was annoying. We did not take breakfast there for 18 CH each as it seemed expensive. Still, I would recommend this place. Just ask up front for bathrobes and more wifi access.