Amsterdam is Netherlands’ capital. It is also a favorite tourist destination with its iconic canals. While there are many beautiful sights and things to do, it is helpful to understand Amsterdam’s history. If you don’t like history, skip directly to our other Amsterdam blogs. 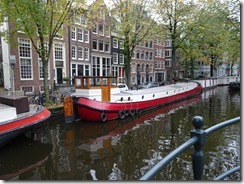 Amsterdam began as a small fishing village in the 12th century. Its strategic location at the mouth of a river opening to the Baltic Sea led to its transformation into a trading center. It initially transported goods from England, Spain, Portugal and Italy into Northern Europe. By the 14th century, Amsterdam had emerged as a powerful trading city. And then came a rather far-fetched, alleged “miracle” surrounding a communion wafer which turned the city into an important pilgrimage destination.

As a province of Spain in the 16th century, it rebelled against a combination of taxation and religious persecution of its non-Catholic population under the Inquisition. This led to the Eighty-Year War and ultimately, the country’s independence. Its history of religious tolerance made it a haven for Protestants, French Huguenots, and Jews. This, combined with its respect for press freedoms attracted Flemish printers and helped establish it the city as an intellectual center.

Amsterdam’s Golden Age began in the 17th century. During this period, Amsterdam became one of the world’s most important ports, largest financial centers and the wealthiest city in Europe. Much of its early trade came from buying spices that Portugal brought from Asia and then selling them to the Hanseatic League cities and throughout Northern Europe. But then came its revolution with Spain. Spain had captured Portugal during the Eighty-Year War. Amsterdam’s lack of access to Portugal dried up the spice trade and forced Amsterdam merchants to cast a wider net. It began sailing its own ships directly to North America, Africa and a growing number of Asian and South American locations including Indonesia, Sri Lanka, and Brazil.

International sea trade sounded like a good move, however, it was a risky business. As many as one of three ships were often lost during a voyage. Those that weren’t shipwrecked often faced pirates and disease. And, if they did get back in one piece, they might find that spice prices had plummeted due to supply and demand.  This led to the 1602 creation of the United Dutch East India Company (founded in Delft, as discussed in our Delft post, but headquartered—and going public as the first publically-traded company in Amsterdam). The cartel monopolized the spice trade and also was empowered to build forts and armies to protect its lucrative treaties with Asian rulers for spices.

This form of company, followed by the formation of the United Dutch West India Company, allowed the company to sail hundreds of ships. The large number of ships allowed it to self-insuring against the loss of some of its ships from the profits of those that completed profitable journeys. All of this shipping activity led to a similar formalization and consolidation in the finance industry. The Dutch East India Company essentially became its own stock exchange (for the trading of its shares) and in 1609, the creation of the Bank of Amsterdam.

The Fall of the Golden Age to Independence

Golden Ages rarely last forever. By the 18th and 19th centuries, the success of Amsterdam and the Netherlands brought it into conflict with other European powers, especially England and France. The resulting skirmishes led to a decline in trade. Then came  Napoleon who invaded and captured the country. From 1899 through 1914 it was incorporated into the French Empire. The French heavily taxed people and businesses to provide money to finance additional conquests. After Napoleon’s defeat at Waterloo, the Dutch gained their independence. In 1915, the United Kingdom of the Netherlands was created.

Amsterdam then had a period of new growth due to the growth of manufacturing and 2 new canals: one to connect with the Rhine River transport system and another to provide shorter access to the Baltic Sea.

The Netherlands remained neutral during the first World War, but suffered with severe food shortages and riots. During the interwar period, the Netherlands recovered and continued its expansion In 1940, Hitler ignored the country’s claim of neutrality. Germany captured and occupied the country until 1945. During this period, 100,000 Dutch Jews, including 60,000 from Amsterdam, were sent to concentration camps. About two-thirds of these ultimately died. One sees plaques all over today’s Amsterdam marking where those who were killed once lived. 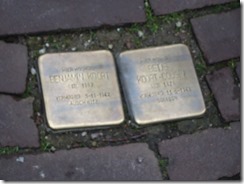 Non-Jews didn’t fare much better. By the end of the war, food and fuel were virtually non-existent. To survive, people ate dogs, cats and even tulip bulbs. Trees disappeared as people cut down virtually all the country’s trees for fire wood.

Amsterdam restored of much of the city’s historic district after the war and became an UNESCO World Heritage Site. The resultant attraction of tourists (17 million a year in round numbers) caused new issues including over-crowded streets and pedestrian ways, littering, traffic and even climate change. But even with the flood of tourists, Amsterdam is still generally viewed as being one of the world’s most livable cities (see, for example, the 2018 Quality of Living ranking.)

Let There Be Bikes…Lots of Bikes

Living or vising here, however, can be dangerous. Although there is little violence or car traffic to worry about in the city center, bikes are everywhere. Hundreds of thousands of bikes. The flat land makes biking easy. Amsterdam has four times more bikes than cars. More bikes than people.  Pedestrians crossing a street or bridge during rush hour can take their lives into their hands, or at least in the hands of the bikers. But even if the bikes are parked, they become an issue. Parked bikes are locked to every available bike rack, post or railing, sometimes impeding pedestrian traffic.

Bikes do have designated lanes and most stay in them and obey the bike lights,  but people still need to be watching out for bikes every second. Large number of bikes can come from any direction and at variable speeds. Crossing streets can take time and caution.

But life is not easier for bikers either. They have to be cautious about tourists wandering into bike lanes. And they have to be diligent about protecting their bikes. About 15,000 bicycles are retrieved from the canals annually from vandals or just accidents. And then there is widespread bike thief. Thieves will blatantly ride stolen bikes through the streets to resell them.

Despite the “hazards”, Amsterdam is a lovely city. It is filled with beautiful gable-roofed houses that line the banks of ring after ring of canals, interesting neighborhoods, wonderful museums and great restaurants. 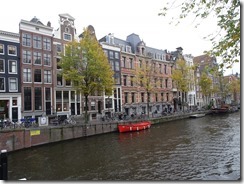