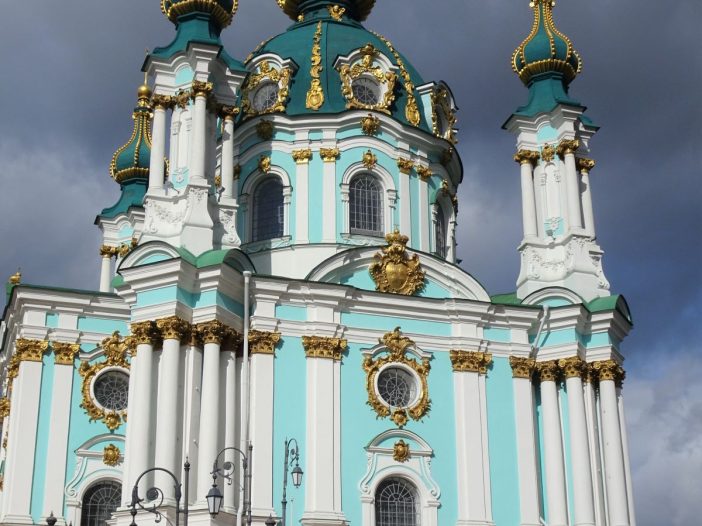 With the horrific things going on in Ukraine today, we wanted to remember the beauty of the country and its people by reposting our blog on Kyiv from our 2019 trip. Our prayers are with the Ukraine people and hope they keep their country and their spirit.

Kyiv Ukraine is one of the oldest cities in Eastern Europe. It has been a major commercial center since at least the 5th century when it was on the trade route between Scandinavia and Constantinople. Like Lviv Ukraine, it has had a tortuous history. The Vikings first conquered it in the 9th century. The Mongols completely destroyed it in 1240. Kyiv fell into a decline until the mid-19th century when it became a gateway between the rapidly industrializing Russian Empire and Europe.

In 1918, Kyiv became the capital of Ukraine when the country declared its independence from Russia but then fell into the orbit of the Soviet Union in 1921. In World War II, the Germans almost completely destroyed the city and annihilated its Jewish population. But it rapidly recovered to become the third largest and most prosperous city in the Soviet Union.

Kyiv regained its independence in 1991. By then it was the country’s largest and most prosperous city, growing to almost 3 million residents. This period of independence, however, has been almost as difficult as its past. Kyiv seems to have teetered from one corrupt and/or incompetent government after another.

Through all of this trauma, Kyiv has managed to rebuild and maintain many of its most historic monuments—especially its religious ones. We took a Kyiv Walking Tour’s Ancient Kyiv Walking Tour to acquaint ourselves with the city. Although the tour provided much less history than we normally expect in such tours, it did provide a basic introduction to most of the city’s most important historic and religious sites. Among these are:

After the tour, we returned to St. Sophia where we explored the magnificent cathedral, with its 29-meter dome, beautiful mosaics, paintings, and frescos, many of which have been, and others that are currently being restored. We also visited the refectory, which houses a number of artifacts and some lovely, framed mosaics.

Other places that we visited on our own include:

Opera Hotel. While we are not convinced this is a 5-star hotel, it was definitely a good hotel. The room had robes and slippers, good sheets, and was a decent size. The shower was strong. In fact so strong that it was impossible to not flood the bathroom floor. The bathroom had a magnifying mirror that you could use as a night light, which is always a nice touch. Since we arrive so early in the morning from our overnight train, we were too early to check in. Reception informed us we could “rent” a room for half price and occupy it immediately. When we said we were OK waiting, she then told us we could wait for 2 hours and then have the room at no extra charge. Obviously, it is a policy issue to not give one a room before 10 AM without extracting money. We needed to recharge our computers anyways so we sat in the lobby and plugged in to catch up on email. About 15 minutes before the 10 AM check-in time, we decided to go out and explore. Interestingly enough, the clerk saw us leaving and said, well, you have 15 minutes before you can go to your room. Hey, rules are rules. But we didn’t need the room until night so we still left. No problem. When we were leaving, we had the hotel call us a taxi to go to the airport. Although the staff was around when the cab came, no one helped us load the luggage into the cab. Nor did anyone tell us we put the luggage into the wrong cab or help us reload the luggage into the right cab. 5-Star? We think not.