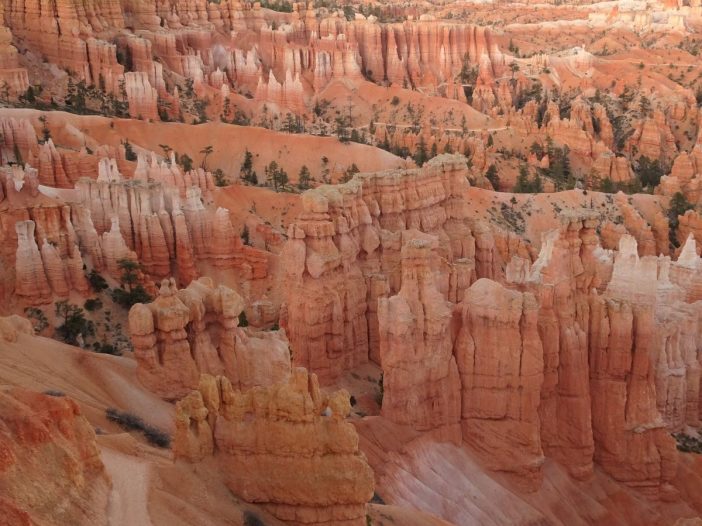 What’s not to love about southern Utah’s Bryce Canyon National Park and its red rocks, pink cliffs, endless horseshoe-like canyons, and its iconic, multi-colored hoodoos. It is definitely a feast for the eyes.

Bryce Canyon, like most U.S. National Parks, offers many ways to explore nature. Stop at one of the many road-side vista points. Stroll a flat 100-yard walk. Take an easy, moderate, or rugged 20, 30, or even 40-mile multi-day hike. Take in the beauty of this fabulous place. But first some background.

The People of Bryce Canyon

People have been in Bryce Canyon for at least the past 10,000 years. From Native American paleo-Indian hunter-gathers who passed through the canyon to subsequent tribes that settled there. European and American explorers came and Mormons settled there in the 1890s. Tourism began around 1915. The 1929 creation of a formal Grand Circle train-bus tour from Bryce, to Zion to Cedar Breaks and the North Rim of the Grand Canyon brought even more tourists. Today it is America’s 12th most popular park.

A stop at the visitors center provides a great overview of the area. To understand the geographical history, one must understand the Grand Staircase Escalante. The Escalante is a 100-mile stairway of geological layers of sedimentary rock that stretches from the deepest depths of the Grand Canyon to the plateau above Bryce Canyon with the cliffs representing the risers and the plateaus the steps.

The steps begin with the basement rock—the Vishnu schist beneath the Colorado River at the bottom of the Grand Canyon which resides atop the earth’s mantle. It progresses up through the dark brown, or chocolate layer of Moenkop foundation (formed when the area was swampy) to the gray seafloor deposit of Topic Shale to the gray Vermillion Cliffs (which we saw in the distance from Page Arizona) interlaced layers of sandstone and siltstone and then to the top two layers of the white Navajo sandstone cliffs (which range from white to dark red depending on the amount of iron in the soil) of the top layer of pink Claron sandstone at the top of the stairs at Bryce Canyon.

Then about 15 million years ago, after the different layers were deposited, flowing water began eroding the cliff faces and valleys. About 3 million years ago the Bryce amphitheater appeared. About 25,000 years ago the freezing/warming cycles began eroding the pink sandstone hoodoos. Today’s current hoodoos were formed from frost wedging, where water deposited in cracks in the Claron layer successively froze and expanded, thereby expanding cracks, creating windows in the sandstone fins and eventually, cleaving the fin into a series of hoodoos in which the hard capstone helps protect the softer stone beneath. Rain meanwhile, dissolves minerals from the hoodoo which flow down and recrystallize at lower levels, providing a coating that helps protect the hoodoos.

Hoodoos are dramatic spires that form when a hardstone cap protects its foundational structure from eroding. While hoodoos exist across the globe (often by other names) Bryce National Park has the greatest number and concentration of hoodoos on earth.

Hoodoos can take on multiple colors depending on which rock layers have a greater concentration of iron oxides (for reds) and manganese oxide (for lavender) for sandstone and iron oxides for limestone (for yellows and browns).

We took a couple of moderately difficult, two-to-five-mile hikes plus shorter hikes from several roadside stops.

This a 3-mile hike has a 600-foot elevation gain. It goes down into the center of the buttes and hoodoos, looking at them from eye-level and from beneath. This lets you experience the scale of the monuments, the millions of years it took for them to form, and the forces that created them. You can see the subtlety of the thousands of very distinct, compressed layers in the structures, of their colors, and how they change as the light changes. It gives you insight into their ultimate fragility and destiny of becoming sand. You see hundreds of hoodoos in different stages of becoming a hoodoo: from being an outer layer of a mesa, butte, or fin; to having a distinct identity; to structures are so tenuous as to be susceptible to the next windstorm to being a small stump or pile of sand. All this plus the sheer beauty of these incredible multi-hued structures against a clear blue sky. Close to transformational.

This roughly three-mile return trip has many moderate and a couple of significant ups and downs. The trip combines views from two of the parks’ most majestic and fantastical hoodoo gardens and the journey along the rim, where you have a chance to experience individual formations more closely and from very different angles and in a different light. Everything from fantastically-shaped, multi-hued buttes and hoodoos to windows and arches. You get beauty and exercise too.

While hiking into the canyon can get you closer to Bryce’s beauty, many viewpoints and short, easy trails also give you a chance to enjoy nature’s beauty. Here are some of our favorites from this trip.

While these 2 points are less than a mile from each other, they look over different sides of the mesa. Yovimpa provides a dramatic view of smoothly-sculpted, multi-hued slopes of colors ranging from white and gray, to pink, red and orange to yellow and green, done over a deep green valley of Ponderosa and Bristlecone pines. Rainbow, the highest of the park’s points at 9,100 feet, meanwhile, lives up to its name with sweeping views over a huge swath of hoodoos, hoodoos-to-be, and ex-hoodoos.

Agua Canyon overlooks a lovely butte, several dramatic hoodoos, and deep red cliffs partially covered with snow when we were there.

While it is called a bridge, it is actually an arch since, as we learned, it was formed by wind and rain rather than from a stream, is one of the largest and most delicate we have seen on the trip, including most of those at Arches National Park.

While the scenery feeds one’s eyes, you also have to feed your stomach. You can eat in the park or at one of the places surrounding the park. We chose the following places.

We had 2 meals here, starting with dinner. Tom began with a pretty good elk chili with white beans, cheddar jack cheese, and large chunks of meat, followed by a perfectly cooked ribeye (the second time after we rejected the overcooked first version) with roasted red potatoes and asparagus. Joyce had Alaskan sockeye salmon (again, perfectly cooked the second time) with cilantro-lime sauce, brown rice, and asparagus. The bread was also tasty—a sourdough loaf with chunks of roasted garlic. The wine list was a somewhat better and more reasonably-priced selection than we had yet seen in Utah. We had a pleasant 2019 Hahn GSM and a glass of J. Lohr Cypress Vineyard Cabernet Sauvignon with Tom’s steak.

For lunch, Tom stayed with the elk chili to which he added some tabasco sauce. Joyce had a decent (although dry, thinly sliced) grilled chicken sandwich with cheddar, bacon, lettuce, tomato, and chipotle aioli.

Ruby’s offers a lot of basic food at very reasonable prices. You can order the buffet which has a wide assortment of protein, salad, and desserts, or order from the menu. We ordered a half a broiled chicken from the menu and the salad-only buffet. We were very pleased with our dinner. The salad bar was loaded with fresh options and the chicken was tender, juicy, and tasty. In spite of our server having to cover a large portion of the restaurant, she was prompt and friendly. Not surprisingly, wine selections were very limited. Joyce had a generic Pinot Gris. After tasting the generic red offering, Tom opted for a Johnny’s IPA.