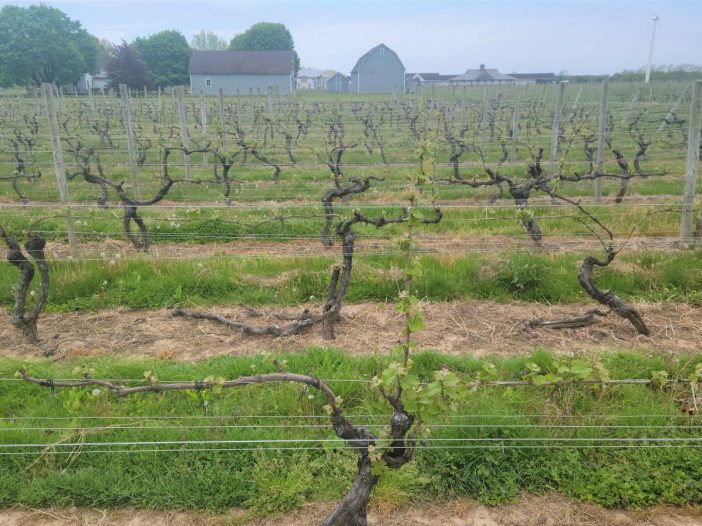 The Long Island wine region is not generally on the must-do list of wine regions to explore. While it is not at the top of our list, we were in the area plus we had previously enjoyed some Long Island wines. We decided it was time to get reacquainted.

The Long Island wine region consists of two areas: the North Fork and the South Fork. We spent most of our time in the North Fork where most of the wine tasting rooms reside.

Long Island’s North Fork runs from Riverhead to Orient Point, Robins, and Shelter Islands. It was primarily a laidback agricultural area covered by potatoes but has undergone a fundamental transition since the Hargraves planted the first vineyards in 1973. Vineyards and hops (to supply the growing number of craft breweries) have increasingly taken over the potato fields–especially over the past 20 years. The area is increasingly drawing tourists to visit winery tasting rooms and to pick up fresh and increasingly organic fruits and vegetables from farm stands.

The North Fork has roughly 80 wineries, with 2,000 acres of planted grapes and producing 6,000 tons of grapes. This is largely due to the fork’s slightly warmer temperatures and its deeper level of fertile topsoil, which was, ironically, carried from the South Fork to the north by the retreating glaciers of the last ice age. The North Fork, therefore, got the wine while the South Fork got the Hamptons.

Long Island is best known for its Bordeaux varietals, especially Merlot (the region’s most prominent grape) and Cabernet Franc (the third largest planted grape) behind Chardonnay. Alsatian and German varietals including Riesling and Gewürztraminer follow, as well as a few native American (Vitus Labarusca) grapes (especially Concord). The relatively short, cool growing season (from bud break in early April through August and early September harvests for whites and October for reds) typically reduces sugar levels. The result is wines with lower alcohol and less concentrated colors and tastes. Still, the Fork does indeed produce a number of high-quality wines. We stopped at a number of wineries.

Growing grapes in Long Island South Fork is more challenging. The frequent fog often results in rot and fungus. Still, three wineries make South Fork their home (although they may also grow grapes in the North Fork). We visited 2 of them.

Wolffer Estates Vineyards is a very large (135,000 cases per year), very popular (a full house on a pre-season Tuesday mid-afternoon) winery. It grows most of its grapes on its 50 planted acre-South Fork vineyard and the rest (especially Sauvignon Blanc and Malbec) on its North Shore vineyard.  Winemaker Roman Roth guided us through a tasting of about a dozen of the wines which he believed to be most representative of the winery, including a few 2019 reds which he contended was the best year in a decade. While we normally do not like Roses, we did enjoy 3 of them. These 3 wines are overwhelmingly customer favorites and largest sellers, accounting for about two-thirds of its total production. The 2021 Summer in a Bottle Rose is an easy-drinking wine made of 50% Merlot plus four other grapes. The 2021 Estate Rose consists of 9 varietals and is more complex. And the top-of-the-line 2018 Noblesse Oblige Sparkling Rose (54% Pinot Noir,  46% Chardonnay) has a nice smooth complexity.

The winning streak continued through the winery’s still whites and reds. We enjoyed the 2020 Estate Chardonnay which is aged in stainless steel tanks with no malolactic fermentation. The delicious 2020 Antonov Sauvignon Blanc is aged five months, all on the lees primarily in stainless tanks with 16% in large, 500-liter puncheons. For the reds, we enjoyed the full-bodied, dark fruit and spice of the 2019 Caya Cabernet Franc, the big, black fruit and spice of the 2018 Grapes of Rolm Merlot, and the full-bodied, very high alcohol (17.5%) 2010 Lorena Amarone Style Merlot whose dried, highly concentrated grapes, even with the high alcohol, retained a touch of sweetness.  And speaking of sweetness, what type of tasting would it be without dessert wines? We finished off with two floral, fruity, golden-colored, wonderfully sweet (256 grams per liter residual sugar–think ripe peaches and honey) dessert wines. The 2012 100% Chardonnay-based Diosa Late Harvest is very pleasant with its peach and apricot flavors. The even sweeter 2019 Dscencia Botrytis Chardonnay is a nice blend of peaches and honey and has a wonderful end taste.

Our only disappointment is that Wolffer wines are not widely distributed in San Francisco.

Overall, we enjoyed some wines from each of the wineries we visited—both North Fork and South. However, two wineries consistently impressed us: Beddle Cellars on the North Fork and especially, bottle for bottle, Wolffer Estates where we enjoyed every wine we tasted. The vast majority of wines at each place belied our generalized impression that Long Island wines lacked the concentration and complexity of the wines from the West Coast and Southern and Central Europe.

Although we did not taste any this trip, most of the wineries we stopped at also pressed cider from local grapes. Some also produced vermouth and/or spirits. Another reason to return!