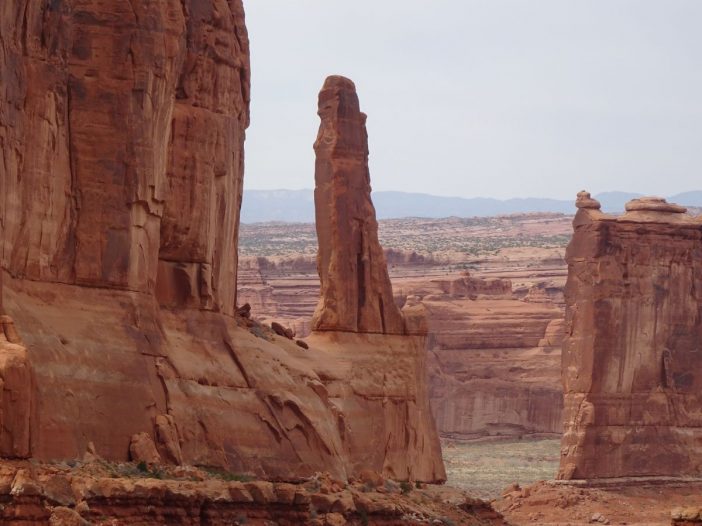 Moab Utah is another part of eastern Utah known for its dramatic scenery. But that wasn’t always the case. Moab’s economy was originally based on agriculture but gradually shifted to mining, particularly uranium. As the cold war ended, the diminished need for uranium resulted in closed mines and empty houses. But then came the tourists.

Many learned of the area and its beauty through the western movies that were filmed there in the 1950s. And let’s not forget the Arches National Park whose beauty and activities draw millions–including us–to the area.

Red rocks glittering in the sun, large stone arches, soaring pinnacles, massive rock fins, and giant balanced rocks. We were looking forward to seeing it all at Arches National Park.

But just our luck. The popular park went to a reserved timed-ticket entry the day before we visited in 2022. As we didn’t have an advance reservation, we, along with hundreds of other tourists who were in a similar position, sat at our computers waiting for 6:00 PM when additional tickets would be available for the next day. Within seconds, the earliest tickets were taken but we were able to score a 3:00 PM slot for the following day. Lesson learned to research if advance tickets are required at popular parks during the peak seasons.

While our visit was rushed, we did get to all of the sites we most wanted to see and even had time to take several trails

Forming of the Arches

Arches National Park has over 2,000 natural stone arches that are largely the result of an underground salt dome that was formed during several of the roughly ten times the areas were under a sea. Seeping water dissolved the salt which collapsed the dome. The resultant parallel cracks in the upper layers of sandstone later rose due to subsequent tectonic forces. These parallel cracks resulted in rows upon rows of thin sandstone fins. When the softer stone in the middle of the fin breaks off due to the slight acidity of the rain, an arch is formed.

Viewing and Hiking the Arches

The best way to enjoy the park is to go to viewpoints, get out of the car and take some hikes. As our time was limited, most of our hikes were short .5 – 3 miles. We especially enjoyed the following viewpoints and short hikes.

While we were able to see the impressive, elegant Delicate Arch from two viewpoints, time did not allow us to take the steep 3-mile trip to the base of the arch. Darn.

One of our favorite park hikes began with 100+ steps down from the car park, followed by a moderately steep decline before reaching a more gentle downward sloping trail (for a total of 320 total feet) along the mile-long trail. Much of the hike was through a canyon of row after row of towering, thin, entrada sandstone fins that dominate the park and are the foundations for the arches for which the park is known. Even the ground was beautiful with its colored rocks. The trail, besides being beautiful, provided a great introduction to the rest of the park.

These two large, dramatic window arches and along with the equally impressive Turret Arch are among the primary sites that one can walk to and through in the dramatic windows section of the park. The area also contains these large windows/arches, several smaller ones as well as the dramatic and unusual Double Windows.

This very unusual phenomenon results when two arches start from the same point but form in different directions. One of these interlocking windows is among the largest arches in the park—144×112 feet for the larger and 67×86 feet for the smaller.

Rows of incredibly colored, multi-hued fins and buttes that are partially green (from development in an oxygen-poor environment, red (from concentrations of iron-oxide), purples, browns, and blacks (from a mixture of iron oxide, manganese oxide, and acidic water) and white (from bleaching) dominate here.

Walls of fins surround the entrance to this roughly 2-mile walk. The sandstone has some of the loveliest swirls and zigzag patterns we had seen on the trip. A little further on the trail takes you to at least three arches, Tunnel, Pine Tree, and Landscape.

The arch is hidden among a field of large fins. You reach it through a field of reddish sand that is so soft and talcum-like that it would put the best beaches to shame.

This large, dramatic arch was formed very differently from most others. While most arches emerge gradually, from a combination of acidic water and gravity slowing carving small pieces out of a fin, Skyline came into being suddenly, with a huge slab falling from the center.

A dramatic sandstone rock precariously balanced atop a mudstone base which, along with a dramatic butte, can be circled via a short 0.3-mile walk.

A pretty overlook of several sand dunes that were compressed into rock by tons of sedimentary rock that was deposited atop the dunes when they were covered by the ocean.

Another mass of dramatic fins and buttes.

Other Noteworthy Moab Sites to Visit

Up until the pandemic, Moab had two wineries: Castle Creek and Spanish Valley. Unfortunately, Castle Creek succumbed to the pandemic-induced slowdown and is no longer operating. However, we did have a chance to sample two of its 2018 reds at a restaurant. Although its Malbec-based Outlaw Red was decent, we found the Cabernet Sauvignon to be severely wanting.

Spanish Valley Winery, meanwhile, is alive and well, very well. Its new owner is committed to making quality wines and to expanding its market. Although it is still quite small at 800 cases per year (sold primarily through the winery with minor sales through state-owned stores and local restaurants) it has aspirations and an expanding wine list.

The winery currently makes five wines. Its Riesling and Gewurztraminer are both made from estate fruit. Their Cabernet Sauvignon and Merlot come from Yakima Valley grapes. And its cherry wine is made from northern Utah fruit. We tasted each of its current offerings plus two barrel samples. The 2019 Riesling is, as characteristic, bone dry with green apple taste. The 2019 Gewertizimer is low alcohol (11%) and off dry (an estimated 4% residual sugar). Both are quite respectable. We found the 2019 Cabernet Sauvignon a bit wimpy and undistinguished. The 2020 American Merlot was bigger, with more fruit and structure. The cherry wine meanwhile, was tart with a bit of fruit on the back—almost like cranberry rather than cherry.

We also had 2 Reisling barrel samples. The 2020 Reisling remained on the vine longer than usual (harvesting a week or two into September rather than at the very beginning of the month). It is moderately less dry and already demonstrating a softer finish–almost like it underwent a little malolactic (ML) fermentation, which it had not. But speaking of ML, the winery is also introducing a Private Reserve Riesling in 2020. The barrel version, which has already undergone partial malolactic, will also spend a bit of time with oak (chips versus barrels). Based on our initial taste, we have high expectations for the winery’s initial effort to produce more premium wine. It is also planning but has not yet begun to produce, a drier version of its Gewurztraminer.

Although we went into the tasting with limited expectations, we were pleasantly surprised, especially with the locally-sourced whites. This is a winery to watch.

As we were in the area for several days, we ate at multiple restaurants.

Sorrel Creek Grill is in an upscale resort whose restaurant has a lovely Colorado River view. It is the one Moab restaurant where we expected city-class service and food. The food almost hit the mark with a tasty caesar salad and the second attempt (we sent back the first overcooked version) at a medium-rare bison tenderloin. After rejecting an over-the-hill 2015 Sutcliffe Vineyards Merlot (which the wine list showed as a 2000) from a limited wine list with 3x-4x markups over the list, we ended up with a 2018 Berringer Knights Valley Cabernet Sauvignon. Our real problem was the service or the lack thereof. It began when they said they could not accommodate us at our requested time, but allowed us to arrive 15 minutes before—only to find the restaurant empty until a half-hour after we arrived. Our biggest problem, however, was the service. The servers seemed to pride themselves on how little time they could spend in the dining room. And when they were in the room, they effectively ignored everyone. Amazing.

Sunset Grill is set on the top of a hill overlooking Moab. We had a very good honey-pecan grilled chicken breast with basmati rice, asparagus, and salad with honey poppy seed dressing. Unfortunately, the very garlicky shrimp scampi had little to commend itself. We found a pleasant 2018 Justin Cabernet Sauvignon from Paso Robles on the very overpriced wine list.

Antica Forma is where we had a decent light dinner of a single truffle crème pizza with mozzarella, mushrooms, and prosciutto along with a bottle of 2019 Di Majo Norante Sangiovese.

Moab Brewery was a good lunch spot except it was bad timing as we do not drink before going on a hike. The perfectly cooked, very tasty Monster Moab burger lived up to its name with at least ¾ pound of meat with mushrooms, bacon, cheddar, a giant onion ring, Jack Daniels BBQ sauce, and lemon aioli. The onion rings, both on the burger and as a side were huge but far too breaded for our tastes.

Canyon Steak and Waffles is a very casual breakfast lunch spot. Tom had a large breast of fried chicken and waffles and Joyce had a bacon cheeseburger. The chicken was quite good (especially with poultry sauce), although he did remove a fair amount of the breading and passed on the waffle. The burger was as one would expect, cooked as ordered and juicy.

Homewood Suites Hilton. We couldn’t complain about staying at this standard suite hotel. It was very clean, the rooms large, and the shower good. It was located on the main strip but we ended up driving to dinners each night so did it really make a difference? Free parking and wifi worked well. Overall, it was a good choice.