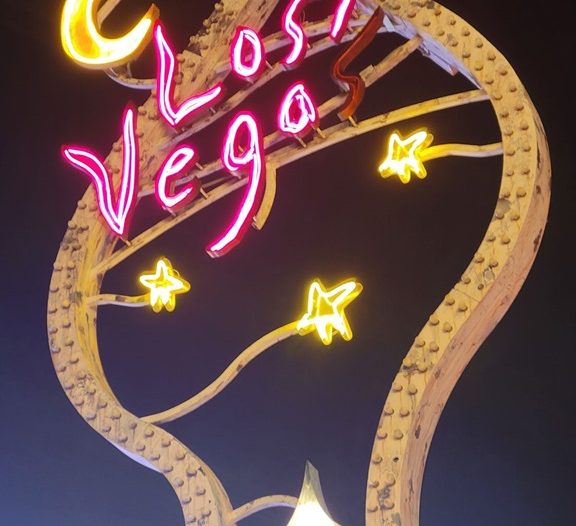 Back in ancient times when personal computers were the big new thing and we were working in the tech industry, we made annual pilgrimages to Las Vegas for the industry’s largest trade show. In those days, Las Vegas was basically casinos, shows, a convention center, a party-town, and lots of sand-filled vacant lots. It still has all of these things except for the vacant lots.

Sure Las Vegas has shows, restaurants, and casinos. Here are some ideas of things to do beyond those things.

Most Las Vegas resorts and businesses used plain metal signs or those illuminated by dozens to hundreds of incandescent bulbs to advertise. By the 1960s and 70s, these were replaced by much more expensive—but also much more compelling neon signs. Today businesses use LED bulbs and wall-size light-dazzling displays. The Neon Museum is a step back in time of when neon signs ruled Las Vegas. Hundreds of companies have donated their old neon signs to the museum for reconditioning and display.

This 501 (c) 3 non-profit museum is housed in an architectural treasure—the 1961 central modernist arched lobby of the La Concha Hotel. Pioneering architect Paul Revere Williams, who was the first African American to be named a Fellow of the American Institute of Architects, designed the hotel.

A few of the signs in the museum were still in operating condition and needed little if any rehabilitation. Others required thousands of man-hours and hundreds of thousands of dollars to restore. Many others are too difficult and expensive to repair. The museum displays about 200 of its 400-sign collection. These are accessible through two separately-ticketed tours. Both are very interesting, not to speak of “illuminating.”

The Boneyard Tour displays many of the museum’s most iconic neon signs, many of which are illuminated in their full glory. A guide explains the delicate task of creating neon. Hollow glass tubes are bent without crimping which would render them useless. They are filled with different gases. Neon (red-orange) and argon (violet to lavender-blue) were the most popular gasses since they were the most available and least expensive. Other gases include krypton (gray to green), xenon (blue-gray), helium (white to orange), oxygen (white to orange), and several others.

Among the more prominent signs in the boneyard were those from the Aladdin, the Golden Nugget, and Moulin Rouge (the huge sign marking the city’s first integrated casino which was forced to close after only six months—almost certainly because it was integrated), Binyon’s Horseshoe (the first to offer free transport from the airport and free drinks and seats at slot machines), the original skull from the Treasure Island sign, and the huge Stardust sign that graced the highway coming in from Los Angeles and that on a 188-foot tower in front of the resort.

Other notable signs include those from Fitzgerald’s (the first black-owned casino), La Concha (whose sign was originally 80 feet tall), and Hotel Nevada (one of the first to feature the Vegas Vic symbol on its neon sign. Large resorts and casinos were by no means the only businesses to use neon signs. Among the more notable of the museum’s small business signs are those from Chief Motor Court (with its elaborate, yet historically inaccurate feathered headdress), Steiner Cleaners (with its fun, Mr. Happy Shirt—based on a doodle by the owner’s daughter), Green Shack (the museum’s oldest neon sign, dating from the 1930s) and the $200,000, double-sided, multi-colored, channeled (a technique to allow colors to blend) sign designed for Ugly Ducking Used Cars.

Among the most noteworthy of the Boneyard signs are the nostalgic “Lost Vegas” sign designed by film director and temporary Neon Museum Artist in Residence Tim Burton and the huge, original 80-foot tall Hard Rock guitar sign which consists of ¾ mile of glass tubing and 1,500 incandescent bulbs and took 1,650 hours and cost $300,000 to restore to its original glory.

The Brillant tour begins with a music-accompanied multi-media show that illuminates old, inoperable signs to suggest how they looked during their lives.

The tour begins at a mural in a park across from the Boneyard. The mural is a series of images of the city’s pioneers including the city’s first African-American woman entertainer at the integrated Moulin Rouge. Liberace (the opening headliner at the Riviera), Kenny Kerr (a leading female impersonator impresario for the Silver Slipper), Paul Revere Williams (architect of the LA Concha and other important Las Vegas buildings) and this being the Neon Museum, a few of the city’s leading sign designers.

The main attraction is in the enclosure behind the mural. A seeming hodge-podge of metal signs with inoperable bulbs or sockets where bulbs used to be—and a downsized model of Liberace’s piano and candelabra perched at the top. As we learned, each of the signs had been digitally mapped and each of bulbs programmed to its original color. When the lights went out, the music started and the computer-controlled images were projected onto the signs—sometimes with images and videos projected onto the signs. It was a fascinating reanimation of previously dead signs. Images continually turned on and off with standing audience members continually turning to follow the action. An interesting and fun experience, especially when the old, mustachioed cowboy began to speak.

Located in the city’s emergent Art District, this 501 (c) 3 organization is dedicated to telling the story and preserving the history of the burlesque. Burlesque, which was originally referred to as parody, isn’t new. It dates back at least to Ancient Greece in the form of Aristophanes’ Lysistrata. It later appeared in works by Shakespeare and Chaucer.

Burlesque first came to America from England in 1865 when a burlesque company came to New York for a limited engagement which kept being extended and toured in other cities for six years. Its popularity led to the creation of the first American touring company in 1868. Other tours formed over subsequent years and large theaters were built to accommodate them.

Originally burlesque was a form of theater and music for workers. It featured singers, chorus girls, comedians, and often, cross-dressers—particularly since it cost less to hire women than men. Women with their more form-fitting clothes that were modestly scandalous were very popular.

By the turn of the century, competitive forms of entertainment including midways and belly dancing shows emerged. This raised the bar for burlesque which responded by upping the ante with higher-quality entertainment and staging in the form of slickly produced shows by impresarios including the Minsky Brothers and Florenz Ziegfeld. They opened large theaters and began booking big-name performers and acts.

The 1930s and ‘40s were generally considered to be burlesque’s Golden Age. It provided much-needed and relatively inexpensive escapism during the Depression. Burlesque boomed during and especially in the early post-war eras as servicemen craved more and more exotic and suggestive entertainment. Exoticism increasingly came in the form of the type of women that servicemen saw in Europe, North Africa, and Japan. This led to the hiring of African-American and Asian women as well as white women who adopted the more oriental dress, makeup, and names.

The demand for more suggestive entertainment came in the form of striptease. Some, like Gypsy Rose Lee, focused on the tease. She took 8 minutes to remove a single arms-length glove. Others, such as Jennie Lee and Dixie Evans, were more aggressive and faced the threat of being arrested on obscenity and lewdness charges. And then there were those who resorted to gimmicks, such as by incorporating animals into the act. One person trained doves to remove her clothing, one piece at a time.

By the late 1940s through 50s, however, movies, radio, and television began to draw not only the attention of customers, but also many of burlesque’s headline entertainers such as Bob Hope, Bing Crosby, Sid Caesar, and many others. As important, for burlesque, people had begun to depart cities for suburbs and grand downtown theaters began to close. Burlesque, or what remained of it, evolved in different directions. The headline and a few supporting acts moved to smaller urban and suburban venues such as nightclubs. Increasingly explicit sexual acts migrated to peep shows.

The 1970s and 80s saw the movement of top acts to television, movies, and legitimate theater. The more prurient needs being addressed by nude or virtually nude dancing, explicit magazines, X-rated movies, and home video seemingly marked the end of burlesque. Jenny Lee, Dixie Evans, and others worked to bring stripping to the masses teaching in schools and in movies (such as “How to Strip for Your Husband”). They started a union to protect strippers and even tried to create a retirement home for retired stripers. Evans launched the Exotic World Pageant and began building a collection of stripping memorabilia—memorabilia that formed the foundation for the Museum’s collection. This collection has been enhanced by donations of G-strings especially pasties (commemorated in its Wall of Pasties) from former strippers.

The museum contends, however, that burlesque experienced growing popularity in the late 1990s with the emergence of “Neo-Burlesque” which incorporated more topical and political humor and “positive sexuality”. It highlights the linkages between exotic dancing and the women’s movement with their focus on choice, economic independence, positive body images, and embracing one’s own sexuality.

A temporary museum exhibited highlights of the career of Coby Lee. This 1960s-era, Asian-American San Francisco stripper went from Chinatown star to dancing studio and club owner and the creator of a review that toured the country.

The museum is trying to foster ongoing interest in burlesque, exotic dancing, and stripping by providing step-by-step instructions in stripping, by offering classes and by staging quarterly Burlesque Reviews and Musicals that pair “Hot Burlesque with Cool Jazz”.

A beautiful red rock nature reserve is located only a few miles west of the metropolitan Las Vegas area. You can take a break from the hustle of Las Vegas and drive through the Conservation Area’s scenic 13-mile loop that goes through the park’s meadows up to its rugged mountains and valleys. Get of the car and take one of the more than two dozen hikes that range from a flat 30-minute walk to seven-mile hikes with more than 2,000 feet of elevation gain. And if you are a biker, a couple of the park’s observation points provide air pumps and tool kits with different size screwdrivers, wrenches, and other tools.

Although Sin City already offers hundreds, if not thousands of entertainment options, too much is not enough. The city’s population and entertainment options have been exploding for decades. The pandemic has only increased the flood of new residents. While it did prompt developers to tap the brake on new entertainment options and venues, it certainly didn’t stop it. And as we have seen, there is no such thing as too big in Vegas–from casinos, hotel complexes and water features.

Among the biggest and most interesting of the city’s new and forthcoming entertainment options are:

MGS Sphere, a huge, 366 feet high, 516 feet diameter) dome that will open in 2023 after a pandemic delay. It will house a 17,500-person entertainment venue with an LED screen that is the size of three football fields and 100 times the resolution of the best current HDTV displays. The facility will also have bars, restaurants, retail space, and a museum.