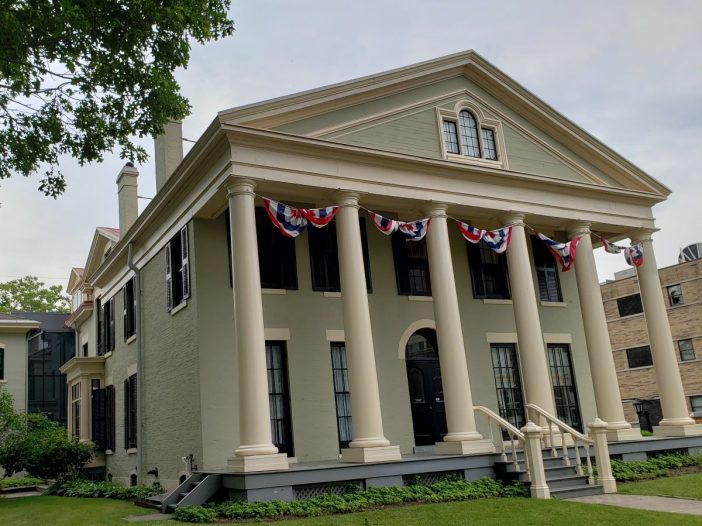 Buffalo New York is in the western part of the state. It is known for its winter weather and the (Erie) lake effect that can dump a lot of snow during snow storms and for Buffalo wings. But Buffalo is a lot more. It is also known for its craft beer, art deco architecture, and its parks. It also has 8 National Historic Landmarks. We took tours of two of them.

It was 1901 and Buffalo’s Pan-American Exposition was celebrating American technology, commerce, and especially electricity. Unfortunately, President McKinley was shot at the exposition’s opening ceremony. Vice President Roosevelt was told that the wounds were not life-threatening and continued his routine. But it changed when he was then told McKinley was likely to die and rushed to Buffalo.

Once in Buffalo, he ran into Ansley Wilcox, a friend he met when serving in the New York State Assembly. Roosevelt took the oath of office in Wilcox’s home. During the first few days of his presidency, he conducted presidential affairs here. He had a telegraph system moved into Wilcox’s home and utilized Wilcox’s desk.

Today you can take a tour of the Wilcox home. Videos provide the highlights of Roosevelt’s career and some of the new president’s primary objectives. These included taming the trusts that were taking over the country’s economy, addressing economic inequality and hardship, ensuring African-American rights, expanding dominion over the entire country, and establishing the U.S. as an international power that would protect the rights of weaker countries against colonial powers. A timeline of his presidency highlights his dramatic expansion of presidential powers and the power of the president’s “Bully Pulpit” in shaping public opinion.

The tour took us through several of the originally furnished rooms including the library in which he took the oath of office and the room he commandeered for his initial days of work as President.

The  five-building, 1.5-acre estate is one of Frank Lloyd Wright’s most important and beautiful residential buildings. Darwin Martin, an executive at the Larkin Soap Company, commissioned the building. The owner of the Larkin Soap Company was planning to commission Adler and Sullivan (Wright’s first employer) to build a new headquarters in Buffalo. Martin, who was intrigued by Wright’s early buildings, advocated that Larkin take a chance on an architect who had never before designed a commercial building.

He introduced Larkin to Wright and his work by commissioning the architect to design his own house. By the time Wright submitted his plan for the home in 1903, Larkin was convinced and contracted with the architect to design a new headquarters. While the critically acclaimed office building launched Wright’s commercial practice, the building was demolished in the 1950s. Luckily, the Martin House, which Wright described as his “opus” and the site plan for which he kept on a drawing board for the next 50 years, remains.

A tour of the house starts with an introductory film followed by a docent-led tour of the complex. The building is a classic Prairie House exterior, with its horizontal Roman bricks, red-tile roof, broad base, low-profile, hidden front entrance, abstract, nature-themed lead-glass windows, and landscaping (which was being renovated when we were there and was mostly dirt).

The interior consists of three floors, the central main floor of which was accessible on our tour. Much of the interior is classic Wright Prairie Style. It has low ceilings, ornate, double-sided fireplaces, mechanical systems hidden within clustered support piers, and bare brick walls. It featured Wright-designed lead-glass windows, light fixtures, and furniture throughout. (While many of the original 750 windows are missing, they, along with missing furniture and details are being reproduced, as funds permit.)

The public area embodies Wright’s traditional open floor plan. Rooms are demarked by ceiling molding. They employ his classic organic architecture, where the interior flows naturally into the exterior. For example, in the library, seats face toward the windows, rather than toward other seats and people. In the entertainment area, five nature-themed lead-glass doors lead onto a deck (and what were then the gardens) that when open, created a seamless indoor-outdoor space. Much of the beautiful, but famously uncomfortable Wright furniture was built-in (“client-proof” as Wright called it) which ensured that they stayed where Wright wanted them. The effect was completed with pictures, which Wright selected and specified their exact placement.

The kitchen, by contrast, is not classic Wright. It is large, spacious, open, and virtually all white. A row of built-in iceboxes entirely occupies one wall, where ice was put in through the back. This food storage area led to the food preparation area, with counters, a sink, stove, and refrigerator, followed by a serving counter, which flowed through to the dining room.

The tour then moved into the pergola, a colonnaded, open-air space that flows straight from the front door to the conservatory which was surrounded by a landscaped yard and gardens. Another door takes you into the tree- and plant-lined conservatory to a headless sculpture of Winged Venus, which is visible from the front door to the conservatory. This then led to the carriage house, which is now used as a gift shop. Excluded from our tour was the other main residence (Martin’s sister’s home) and the garage, which was destroyed and must be rebuilt.

This destruction and rebuilding process characterized the entire estate. The Martins lived in the house from 1905 to 1937, holding onto it for as long as they could through the depression. By then, they could no longer afford the upkeep and had been unable to sell it. They were forced to leave and the buildings stood empty. In 1954 an architectural firm bought it for back taxes, subdivided the property, and converted the main house into apartments. The property (including subdivided parcels) was bought and, as funds and donations permitted, refurbished to its original condition by the Restoration Corporation, the University of Buffalo, and the State of New York.

While we would never want to live in one of Frank Lloyd Wright’s homes due to the mandated furniture (uncomfortable) and low lights (our older eyes now need more light), we do greatly admire them. Falling Water may still be our favorite, but the Martin House was quite impressive and is well worth a trip to Buffalo to see.

At one point, Buffalo had more millionaires per capita than anywhere else in the country. Trying to escape the congested downtown area, many wealthy Buffaloans built their mansions on Delaware Street between North and Brant Streets. And as they tried to outdo their neighbors, the homes got larger and more elaborate. The Wilcox home where Roosevelt spent his initial days in office is here. So too are many other mansions.

While some of the mansions were torn down as the wealthy moved away, many have now been restored.

We only had one meal in Buffalo and it was great. Hutch’s is a  popular Buffalo restaurant. We struggled to select among the several dishes that caught our eye. Then choosing became harder when we learned they had seasonal softshell crab sautéed in white wine, garlic butter, ginger, and soy sauce. Uncharacteristically, we both ordered the same dish. What arrived, however, were four of the largest softshell crabs we have ever seen. Each of us, as it turned out, would have been satisfied with only one—while allowing Tom to have ordered the veal chop that he also craved.  Definitely, a place to eat.